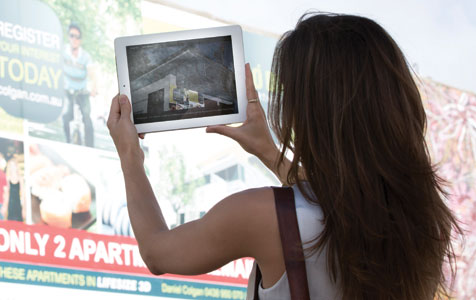 NOW YOU SEE IT: Becky Lee shows what her Virtualiis app can do in front of the SODA Apartments site in Northbridge. Photo: Attila Csaszar

JUST two years ago, Becky Tunks (nee Lee) was saving up for her first property – an off the plan apartment.

Not long into her search she realised there was no single place to view all the up-and-coming developments in Perth, much less somewhere to see what the projects would actually look like once finished.

From such a thought, a new business idea was born.

Instead of buying an apartment, Ms Lee spent her deposit developing an app (‘Virtualiis’), which gives off-the-plan buyers a virtual look at the finished complex years before it has been completed.

In so doing, she also gave developers a way of showing off their product to interested buyers in a unique manner.

“Home buyers can stand in front of the property while it is still under construction – it might be no more than a hole in the ground – and point their iPad or smartphones at it and see what the finished apartment will look like,” said Ms Lee, who is CEO of Virtualiis.

“As long as the view includes the Virtualiis printed code on the signboard, the completed building materialises in front of their eyes.”

It’s almost impossible to describe the effect until you see it for yourself.

This is an example of ‘augmented reality’ technology in practice, perhaps the first example of its kind applied to real estate (or any) business in Western Australia.

Whereas ‘virtual reality’ creates a complete computer-generated environment like you see in computer games, augmented reality blends the virtual into the real world.

When looking at a planned development through the Virtualiis app, objects appear exactly as if viewed with the naked eye – except the future building is in the scene, in situ, as if it were finished.

The specific technology behind Virtualiis was created by Perth gaming developers. Ms Lee applied for and won a grant from the City of Perth to fund a patent for the underlying technology, and also attracted some seed investment to get the company started.

Architects Gresley Abbas and real estate developer Colgan Industries decided to test the product out with their SODA Apartments development in Northbridge.

“Having toyed with similar but less sophisticated systems in the past, we were pleased to use this new concept to present our project models in various client presentations,” Gresley Abas’ Philip Gresley told Business News.

“Our clients were impressed.”

More than 80 people have downloaded the app and looked at the apartment block on Lindsay Street in recent months.

“You can only do so much with plans and drawings. The app has really helped clients visualise what the finished apartment will look like,” Colgan Industries’ Daniel Colgan said.

“It’s a quantum leap in imagination for them.”

Virtualiis aims to charge developers a subscription fee to use the service. In the next version of the app, due out soon, developers and architects will be able to upload their own models and see how the product works. In future versions, users will be able to contact the selling agent and click on individual floors to see what is for sale and what has sold.

“The idea can be applied to councils and anyone looking to develop an area or suburb,” Ms Lee said.

“People will be able to see what an area could or will look like in the future.”

Imagine the applications once the much-heralded Google Glass comes out next year.

Already, Ms Lee is experimenting with the virtual reality gaming headset Oculus Rift, which has a much wider field of view than the iPad’s 50º.

Virtualiis is available from the App Store or iTunes.