Operating a ‘gastro-pub’ in what for many is a holiday getaway destination has its own set of challenges.
Carolyn Herbert reports. 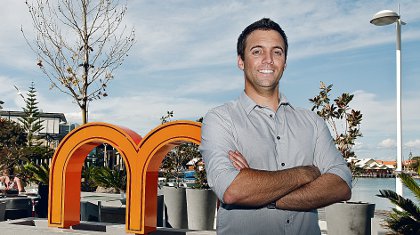 COMPETITION: Kevin Smith says recruiting management and senior kitchen staff for M on the Point has been difficult due to the opportunities offered by the state's mining sector. Photo: Grant Currall

MANDURAH’S newest ‘gastro-pub’ – M on the Point – is the latest venture by Subiaco Hotel owner Judith Monaghan, and forms part of Mirvac’s $230 million The Point mixed-use development, on the old Peninsula Hotel site.

Bringing a bit of ‘Subiaco to the sea’ has not come without its challenges, however, with staffing and seasonal trade posing the biggest difficulties for the business.

The pub, which is situated on the estuary, opened in May 2009 and consists of a fine-dining restaurant, two bars and a large alfresco courtyard.

After working at the Subiaco Hotel for more than five years, M on the Point general manager Kevin Smith says he leapt at the opportunity to move to Mandurah and manage the pub.

“This place is my baby, if you like; I’ve seen it grow from a building site to what it is today,” he says.

Mr Smith told Gusto he has maintained a hands-on approach to running the venue, working in front-of-house roles, in the office and even making cocktails behind the bar.

“I wouldn’t have it any other way. I didn’t choose this industry to sit in an office all day and if you’re in hospitality you have to stay in touch with your customers and get their feedback, especially in this environment [regional city],” he says.

Mr Smith cited the need to recruit almost 80 staff from scratch as one of the biggest challenges in the venue’s start-up.

“It was a huge recruitment process and it was very difficult recruiting good staff in Mandurah,” he says.

As part of the recruitment strategy, Mr Smith preferred to recruit staff who hadn’t worked in other venues around Mandurah to avoid ‘bad habits’ being brought across to the new venue.

“At the end of the day I prefer to take staff on a little bit ‘green’ and train them in our own ways. I recruit on wide-eyes, motivation and that eagerness to learn,” he says.

Recruitment of senior kitchen staff was also a challenge, with an increasing number of people choosing to work on the mines.

“The mines have really hurt us; with casual staff it is relatively easy but recruiting management and senior kitchen staff is still very, very difficult,” Mr Smith says.

While the sluggish property market in the area hasn’t had a negative effect on trade, being in a tourist town has meant there are dead periods in the cooler months.

“The economy down here hasn’t really hurt us, but I think the fact that we are a new business and we are the exciting new place to go has meant people are choosing us,” he says.

“But we have experienced definite seasonal trends, which is something that we knew would happen but it is drastic in this town; obviously the locals are still around on weekends and that’s why it’s busy, but when it comes to winter, it’s like a ghost town.”

To counteract the lull in trade in the winter months, M on the Point has offered a number of special promotions and discounts to walk-in customers and Facebook followers.

“We do half-price specials on Wednesdays and weekly specials to try and attract customers, like $10 cocktails on Friday nights,” Mr Smith says.

Maintaining a strong web and social networking presence has also been integral in promoting M on the Point, Mr Smith told Gusto.

“We refer people to our website all the time and we promote ourselves on other food pages as well; people use the internet now more than ever, so it has been really effective,” he says.

“We put as much as we can on the Facebook page, like cocktail specials, special promotions, prize draws and menus to get people talking about M on the Point; it’s a fantastic tool and it’s free marketing at the end of the day.”

Mr Smith says these specials are just some of the ways M on the Point remains competitive with nearby pubs and restaurants.  Even though he says the food is priced at the higher end of the scale, the venue offers some of the lowest priced beverages in the area.

“We are trying to bring a little ‘Subiaco-by-the-sea’ because people want that kind of energy, quality of food and that sense of urgency on the floor; and that’s hard to find in this town,” Mr Smith says.

“Most importantly, the price of our beverages is very competitive; bums on seats is what it’s all about and at the end of the day we are a pub, so we have to keep those prices as competitive as possible.”