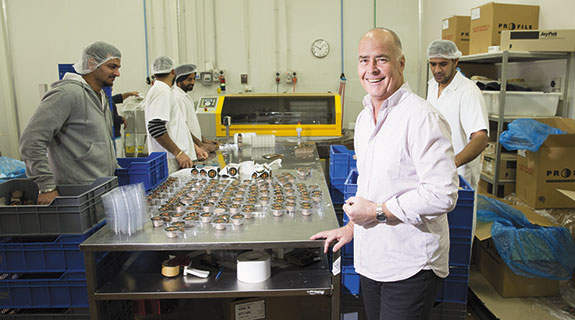 It may be a recognisable national brand, but Normandie Foods is not particularly prominent as a business.

Normandie is tucked away in a quiet corner of Malaga, a small canvas sign draped on the Cyclone fencing the only clue to its presence.

And owner Jeremy Walsh likes it that way.

He’s built a strong business in a tough and competitive industry and, despite selling consumer products such as pâté, part of that successful formula has been keeping a low profile.

But in a rare interview granted to Business News, it’s clear that Mr Walsh is also extremely proud of the record of Normandie Foods and its 20 loyal staff in building something that is hard to find in Western Australia – a labour-intensive manufacturer and branded national food business.

“We are the biggest in Australia, but it is a very small market,” Mr Walsh offers with typical understatement.

Mr Walsh bought the business 18 years ago to escape a career that required a lot of travel. Instead, he worked the kind of hours and did the sort of multi-tasking typical of many small businesses, and offered the stark assessment that Normandie would not have survived if his accountant wife, Louise, hadn’t worked there while still raising their children.

There’s been fire, a product recall, and even an extortion attempt.

A recent decision to move to more spacious premises in Malaga was also challenging.

There, he has invested more than $3 million in refitting an old meat works, adding new storage, more cool rooms and new packaging equipment.

A lot of that has been put in place to meet the needs of his major customers, supermarket giants where dealings with suppliers often court controversy.

“I have been dealing with Coles and Woolies and IGA for 18 years,” Mr Walsh said.

“How many customers do you get in any business that last 18 years, that order regularly and pay regularly?

“You have to get the sales but they are brilliant customers.

“One of my pet hates is everyone knocking them.”

Industrially, he believes Normandie’s production process is core to his business success, with just-in-time delivery of inputs, open crock pots, blast chillers and full-vacuum seals ensuring that the group’s pâtés taste better and last longer without significant amounts of preservative.

Naturally, his team is obsessed with hygiene, a critical factor with a product that is wrongly blamed for food poisoning more than any other.

That happened all the time, Mr Walsh said.

“Where we can we get the product tested,” he said.

Mr Walsh said food safety was part of the service ethic of the business, belying his seemingly nonchalant attitude to promoting the business.

“I spend a lot of time looking like I don’t care about things,” he said.

“But what matters is if you buy my product, you get what you pay for.

“You buy it to have a glass of wine with friends.

“It has got to taste lovely; it’s got to be what people expected.”