WA miners are being attracted to Malawi thanks to its pro-development and mining government. 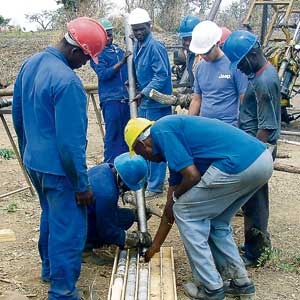 WESTERN Australian mining companies are being lured to the Republic of Malawi in search of riches; although getting hold of a drill rig can be problematic.

"But it's not quite as easily explored as Australia because getting hold of a rig is awkward," Mr Christie said.

"It's a fairly small fish pond and companies have to work together."

Oropa is one of a handful of WA-based companies - including Paladin Energy and Globe Metals & Mining - which have staked their uranium claim in Malawi.

The geology of the region is also known to be conducive to other commodities, although few miners have yet to exploit the opportunities.

Mr Christie said that even though there was great potential in Malawi, limited funding squeezed by the economic downturn meant there was uncertainty around whether Oropa's prospecting licenses would ultimately yield results.

"We are probably looking to not necessarily offload this project but perhaps get into a joint venture," Mr Christie said.

"We've had a dickens of a time raising funds."

Instead, Oropa is concentrating on its more advanced Pungkut gold project in Indonesia.

Malawi has a system of fixed royalties which can be negotiated down in exchange for equity in a project.

In 2007, Subiaco-based Paladin handed over a 15 per cent stake in its Kayelekera uranium project in exchange for a reduction in the corporate tax and royalty rate and other benefits.

Paladin also had to overcome legal challenges from within Malawi around its social responsibility program, which were settled less than two years ago. The mine, which is expected to produce almost 1,500 tonnes of uranium oxide, was officially opened last month.

Paladin also operates the Langer Heinrich mine in Namibia.

Spot uranium prices have fallen from more than the $US130 a pound peak recorded in 2007, to $US40 a pound last month.

Analysis by UBS Investment Research showed that Paladin shareholders have priced in a longer-term spot price of $US61 a pound into their shareholding.

Paladin managing director John Borshoff predicted last year that the price would rebound to $US90 a pound in 2009, making the industry more lucrative again.

Globe Metals & Mining is planning to have its multi-commodity - niobium, uranium, tantalum and zircon - Kanyika Project in central Malawi in production mode in 2011.

Globe Metals & Mining needs about $150 million in funding to set up the mine, which will be largely raised from overseas sources.

Mr Stephens, who has been to Malawi more than 20 times in the past three years, said the company would have to look outside of Australia for financial backing due in part to the financial crisis and in part to a lack of local investor awareness of the niobium industry.

Niobium's primary use is to strengthen steel, and it is often found in structures requiring a long life such as pipelines.