Small businesses are using the instant tax write-off to get some new ideas and overdue investments under way. 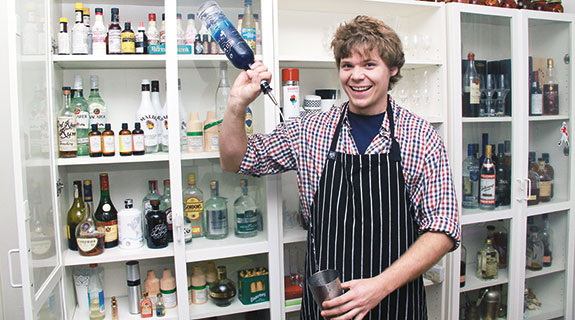 TONIC: Andrew Shugg says the tax write-off has enabled him to grow his business.

The state’s small business sector has embraced the federal government’s $20,000 instant tax write-off, with some innovative ideas getting the green light from entrepreneurs.

The policy, which was unveiled as the flagship announcement in the May federal budget, was intended to stimulate business spending in the short term, with the added benefit of building the economy’s productive capital base in the longer term.

Although any wider economic stimulus is yet to play out comprehensively in the national figures, business owners spoken to by Business News welcomed the opportunity to get some ideas and marginal projects under way.

Your Bartender director Andrew Shugg bought four portable bars he intends to hire out to clients for functions.

That will make for an expansion of his existing operation, providing staffing and equipment for events.

“(It’s) good that (the policy) came out before the end of the financial year,” Mr Shugg said.

He said the stimulus had encouraged him to bring purchasing decisions forward, although he was aware that any expenditure had to be capable of earning a return.

“Being a small business, cash flow is extremely tight, and purchasing an expensive asset and only being able to claim the decline in value is hard to justify,” Mr Shugg said.

“It’s going to allow me to provide a more well-rounded service.”

Mr Shugg also runs a popular food van in the city, What The Flip, which is frequently anchored at the new 140 William Street building.

For that project, he’ll be buying a new coffee machine thanks to the tax break.

Small businesses in professional services are using the deduction, too.

“It had been in the back of my mind that it was something we should do … but there was absolutely no urgency to it,” Ms Munro told Business News.

“When something like that is offered, you think, ‘is there anything we need to do to take advantage of it?’”

She said her business had been feeling the impact of the current slowdown, particularly tighter budgets among public sector clients.

So far, data has given mixed messages about the impact of the policy.

In July, the Commonwealth Bank of Australia’s business sales indicator suggested that business services companies, such as those that provide office equipment, had had a 2 per cent lift in sales month-on-month in June.

CommSec chief economist Craig James had suggested that boost was due to the stimulus impact of the tax write-off in combination with low interest rates.

Data from the Australian Bureau of Statistics showed a moderate impact, with retail spending in the month of May up softly at an increase of 0.3 per cent month-on-month nationwide.

The big gauge, however, will be changes to business investment and capital spending, the results of which are usually delayed for some months.