In 2010 Colin Barnett conceded he had failed to deliver on a 2008 pre-election promise to ‘‘legislate for a proper register to monitor the activities of political lobbyists”. Now, as the state election approaches, nothing has changed. 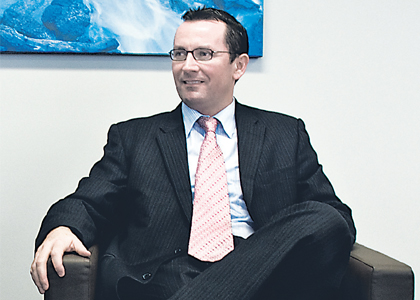 INACTION: Questioning by Mark McGowan in 2010 led to an admission by the premier that he had broken his promise to legislate on lobbyists’ activities. Photo: Grant Currall

In 2010 Colin Barnett conceded he had failed to deliver on a 2008 pre-election promise to ‘‘legislate for a proper register to monitor the activities of political lobbyists”. Now, as the state election approaches, nothing has changed.

VOTERS this year will have the opportunity to pass judgement on two minority governments - the Julia Gillard-led Labor-Independents-Greens coalition, and the Colin Barnett-led Liberal-Independents-Nationals alliance -both of which dishonoured core promises.

From Ms Gillard we heard: “There will be no carbon tax under the government I lead,” and “The budget is coming back to surplus, no ifs no buts, it will happen.”

Australian industries, and thus employment, are also being disadvantaged.

In Western Australia, Mr Barnett has also failed to deliver on a solemn pre-election commitment.

Before the poll of September 2008, he released a document titled, ‘Liberal Plan for the First 100-days of Government’, which committed to: “Legislate for a proper register to monitor the activities of political lobbyists”.

In a bid to show he’d be different, Mr Barnett committed to undertaking “to monitor the activities of political lobbyists”.

This, he felt, would help ensure he’d win what was shaping-up to being a closely run contest - one he went on to win by just 35 votes in the seat of Riverton.

So a self-imposed 100-day deadline was the crucial ingredient in Mr Barnett gaining power.

However, by the deadline in mid-December, nothing had happened - a solemn pre-election undertaking had morphed into a non-event.

Since none appeared, Labor manager of opposition business in the Legislative Assembly (now leader), Mark McGowan, quizzed him on this during a June 1 2010 estimates committee hearing.

Again, according to my calculations, that was 531 days after Mr Barnett’s unrealised 100-day deadline “to monitor the activities of political lobbyists” had passed; or 631 days after the election.

Mr McGowan asked: “The Liberal-National government committed to, within 100 days of coming to office, having lobbyist legislation drafted and in front of parliament.

“It has now been between 500 or 600 days since the Liberal-National government came to office but there is no lobbyist legislation in view.

“When will the government introduce such legislation into parliament?” Mr Barnett shouldn’t have been surprised at the question, since he’d lambasted Labor over CCC revelations that revealed Brian Burke’s until-then-little-known lobbying activities.

“A Liberal government will move quickly to legislate to register and monitor the activities of consultant lobbyists.

“Introduce legislation to create a public register for lobbyists and require regular reporting of lobbying activities.”

Little wonder Labor patiently waited to see what procedures Mr Barnett had in mind to monitor lobbying activities and have them regularly reported upon.

How did Mr Barnett explain his 530-plus days of inaction?

“I think it was an ill-thought-out proposal during an election campaign to suggest that that could be drafted. “Work is progressing on it.”

Mr McGowan: “It was written down, though.”

Be grateful for small mercies, at least he conceded he’d dishonoured this core promise, something Ms Gillard hasn’t done with regard to the CO2 tax, and for failing to ensure a budget surplus as promised.

“I refer to the premier’s election promise to introduce lobbyist legislation in his first 100 days in government,” Mr Ripper said.

“I have a copy of the policy here, if the premier has forgotten about it.

“During estimates hearings this year, the premier identified this as an ill-thought-out proposal made during an election campaign ...

“After 731 days in government, when will the legislation be introduced?

“Will it contain compulsory disclosure of all contact between lobbyists and ministers?”

Although Mr Barnett said such legislation was coming, he carefully sidestepped the pivotal matter of “compulsory disclosure of all contact between lobbyists and ministers”.

In other words, the monitoring, regular reporting and disclosure of lobbyists’ activities was slipping off the government’s legislative radar.

But without such disclosure by all lobbyists, those hiring lobbyists, and those being lobbied within government - as done in the US - lobbying wild west WA-style will remain a largely secretive business.

Voters, especially business people, must be able to easily access - preferably via the internet - documentation disclosing who’s been lobbying whom, on behalf of whom, and what fees were charged, as done in the US.

If he never intended instituting complete openness, making lobbying an above-board activity, his promise was disingenuous.

What else was learned on that September 2010 day?

“However, it will probably be introduced early next year [2011].”

A bill finally reached the Legislative Assembly on November 9 2011.

And it wasn’t until September 19 2012 that the bill moved from the Legislative Assembly to Legislative Council, day 1,374.

Mr Barnett now had from September 19 2012 until parliament was prorogued, sometime in late January or very early February 2013, to fulfil his promise since a state election falls due on March 9 2013.

Although parliament is normally prorogued shortly before elections are called, this time proroguing came on December 14, bringing to an end all business nearly three months out from the March 9 election.

Consequently, secretive WA-style lobbying remains healthy and the Barnett bill will need to be reintroduced next session, during 2014, perhaps later, if he retains power.

Perhaps his foot-dragging suggests he’ll never resurrect it, hoping voters have forgotten all.

In other words the promised lobbying reforms of August 2008, now left undone even after 1,540-plus days, may forever remain a dead duck.

So much for Barnett-style promises.