Political and humanitarian principles should not be forgotten when doing business with China. 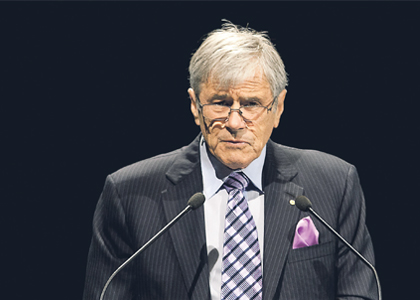 Political and humanitarian principles should not be forgotten when doing business with China.

TEN or so years ago, a politics student researching for a masters thesis contacted me about several points I’d highlighted in this column.

Our meeting and subsequent chats proved to be extremely helpful to me because he had a range of impressive insights about aspects of his discipline that I’d never encountered.

One I still vividly recall dealt with the question of warfare.

While chatting one day he quite casually contended that the surest way of ensuring wars never broke out was to extend democracy to the maximum.

“What very few realise,” he said, “is that no two democracies have ever waged war against each other.

“True, there are many cases of democracies going to war; but, crucially, never ever against one another.

“Wars are fought between totalitarian and authoritarian nations and dictatorships, sometimes even against democracies, but there’s never been one between two democracies.”

Until then, I’d never heard this profound point made.

And after a few moments of thought I conceded that this original insight was correct; I couldn’t name two democracies that had fought against each other.

(Please note, neither America’s nor Spain’s civil wars negate his contention since they were internecine imbroglios, not between two democracies.)

All this returned to mind when Beijing recently sparked strife over the tiny Senkaku islands located between China and Japan, which both claim.

All the hallmarks of a protracted military engagement seemed to be in place, including, and ominously, the fact that Japan is a parliamentary democracy, whereas China most definitely is not.

Little wonder US Secretary of Defense Leon Panetta, responded thus: “I am concerned that when these countries engage in provocations of one kind or another over these various islands, it raises the possibility that a misjudgement on one side or the other could result in violence, and could result in conflict.

“And that conflict would then have the potential of expanding.”

Moreover, Japan isn’t China’s only neighbour to have recently felt the ire of Beijing.

Little wonder also that Edward Luttwak, long-time Pentagon adviser and author of a forthcoming book, The Rise of China v Tire Logic of Strategy, highlighted this and went on to claim that China, because of such behaviour, warrants being dubbed an “autistic nation” - one seemingly incapable of sensibly relating with others.

“If you just think that in the last few years, almost four years, they’ve managed to quarrel over territories with Japan, with Vietnam and with India, all at the same time,” Mr Luttwak said.

Japanese affairs expert at Beijing’s Foreign Studies University, Zhou Weihong, believes China has opted to test its newfound economic and military power, with the results not yet being in.

Whatever the explanation for the sudden emergence of such conduct, it’s important to be mindful of the fact that China today lacks a crucially important inhibiting factor; namely, that it isn’t a parliamentary democracy.

And there’s certainly no evidence in sight that suggests this form of governance is likely to emerge soon.

China’s traditional dealings with foreigners were never based on treating others as equals.

Quite the contrary; all those nearby were treated as tributaries, thus unequals, and whose representatives needed to know their place when contacting the royal court.

This, of course, is contrary to international law, as devised by Europeans, which is underpinned by a belief that all states be regarded as equals.

China today continues to lack not only a tradition of regarding other nation states as equals, but also a democratic form of governance whereby its citizenry have significant input or sway over programs and policies.

Governance is instead monopolised by a tightly disciplined Leninist political entity that deliberately excludes any form of popular participation.

Today’s China is thus an unusual mixture of the modern and pre-modern.

Its economy over the past several decades has rapidly modernised, with many hundreds of millions of Chinese relocating to cities where they’ve encountered modern facilities, comforts and work removed from traditional agrarian toil.

In addition, increasing numbers of Chinese are acquiring Western-style middle class comforts such as cars, international travel, and electronic and other consumer items.

However all this is happening within an uncompromisingly antidemocratic milieu.

China - a country of 1.2 billion people - in the words of Steve Tsang, professor of contemporary Chinese studies at Britain’s University of Nottingham, is the property of a single all-powerful and inherently corrupt self-serving entity, the country’s 80 million-strong Communist Party.

“The basic fact [is] that the CCP is not so much the ruling or governing political party in China - but that it owns the country,” he said.

And strangely, several Australians seem quite oblivious to such facts, despite having extremely close contact with those at the CCP’s highest levels.

Two standout examples are Perth billionaire, media mogul, and owner of a China-based Caterpillar franchise in north-east China, Kerry Stokes; the other is James Packer, the billionaire owner of the Crown Perth in Burswood as well as a casino in Macau.

Mr Stokes made a strange call at a business conference convened in Perth last year when he effectively said Australia should fully embrace China’s ways.

According to a report in his own newspaper, The West Australian, after ‘passionately’ calling for a special relationship with China, he said: “If we don’t integrate our culture and become close and accept the Chinese, then it will be to our peril.”

More recently at a conference convened by The Australian newspaper, and in the presence of Mr Luttwak, Mr Packer downgraded Australian conduct by claiming; “China has been a better friend to us than we have been to China.

“We, as a country, have to try harder to let China know how grateful we are for their business,” he urged.

Mr Luttwak’s reported response was short, sharp, and to the point.

“Packer should shut up ... because if a country as prosperous as Australia has to compromise its values for the sake of business then what is it that we can ask of poorer countries,” he said.

“If a country as rich as Australia needs to appease the Chinese when the Chinese misbehave, then it has no dignity.

“I don’t know anybody important who wants to follow the Packer line.

“Unlike Mr Packer I like the Chinese, not just their money, and because I like them so much it is dreadful to see them falling into the same error that destroyed the Germans of 1914.”

What can possibly be learned from all this?

Clearly, if the CCP permitted moving towards the enfranchisement of its citizenry, East Asia and indeed the entire Western Pacific region, of which Australia is integral, would be far more secure.

This, of course, is unlikely to happen, at least in the foreseeable future.

But since neither of Australia’s two most influential billionaires - who have such intimate ongoing contact with China’s self-appointed communist elite - appear interested in promoting democratic practices it’s up to the rest of us to take each and every opportunity that ever arises to do just that.