Lithium Australia plans to commence drilling to evaluate the potential and geometry of lithium pegmatites at the prospective Youanmi project near Sandstone in the Murchison region of WA, before the end of this month. The company will also carry out work on the higher-grade sections of a defined vanadium resource, which it believes to be amenable to direct leaching to produce vanadium sulphate. 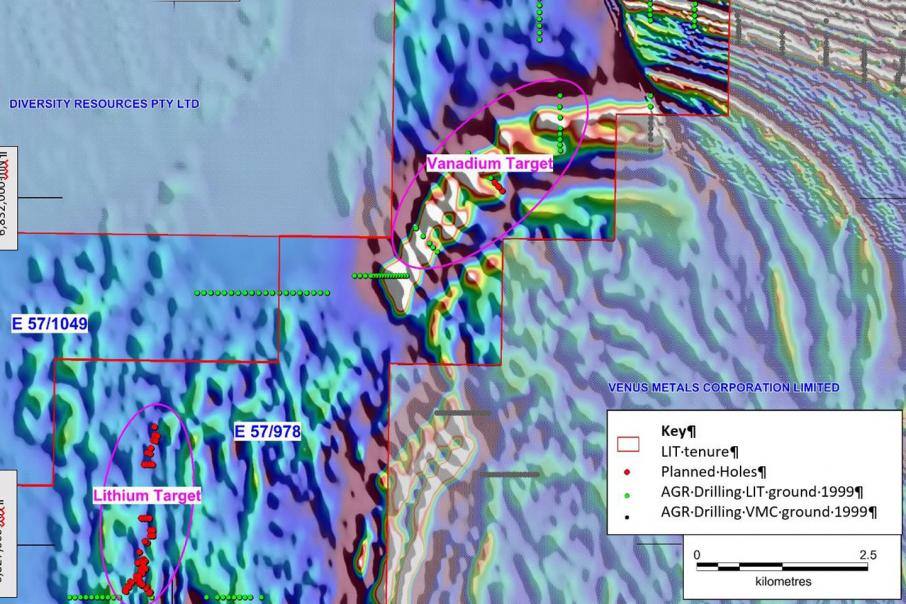 Lithium Australia is poised to run a ruler over the prospective Youanmi project near Sandstone in the Murchison region of WA, where it had previously delineated lithium-bearing pegmatites.

The company plans to start up to 3,000 metres of drilling before the end of this month to evaluate the potential and geometry of the pegmatites.

Samples will also be recovered to determine the characteristics of the lithium mineralisation and for metallurgical testing.

In addition, Lithium Australia will carry out drilling within a defined vanadium resource.

This drilling will be restricted to higher-grade sections of the oxide resource, which management says may be amenable to direct leaching to produce a vanadium sulphate product.

Last year, the company signed an option to acquire the project from private exploration company Diversity Resources, which is also prospective for additional vanadium, over three contiguous exploration licences covering about 450 square kilometres.

Initial sampling turned up lithium values to 4.2% lithium oxide, which was also anomalous in caesium and tantalum, pointing to a potentially highly fractionated swarm of pegmatites in the region.

Lithium mineralisation at Youanmi is pegmatite-hosted, with lepidolite being the dominant lithium mineral located to date.

This has undoubtedly piqued Lithium Australia’s interest as the company’s proprietary SiLeach processing technology is targeted squarely at recovering lithium and other by-products from lepidolite without the need for expensive, energy-hungry roasting.

Managing Director Adrian Griffin said: “Despite the rich mineral endowment of the Youanmi province, lithium and vanadium have largely gone unnoticed. The vanadium resource established by Lithium Australia has shone a spotlight on the area, and we hope our lithium drilling will do the same.”

Lithium Australia can acquire the three exploration licences that comprise the Youanmi project by issuing Diversity $3.1m in scrip and granting Diversity the greater of either a gross production royalty of 2%, or $1 per tonne of material mined and processed from the tenements.

Both the lithium and vanadium markets have been growing rapidly, the latter at a break-neck pace due to rising demand for vanadium redox flow batteries.

The lithium-ion battery market is expected to grow at a compound annual growth rate, or “CAGR”, of 10% to hit USD$105 billion by 2025, according to business analytics and consulting company Adroit Market Research.

Adroit also projects that the vanadium redox flow battery market will grow at a massive 59.7% CAGR to USD$1.11 billion by 2025.