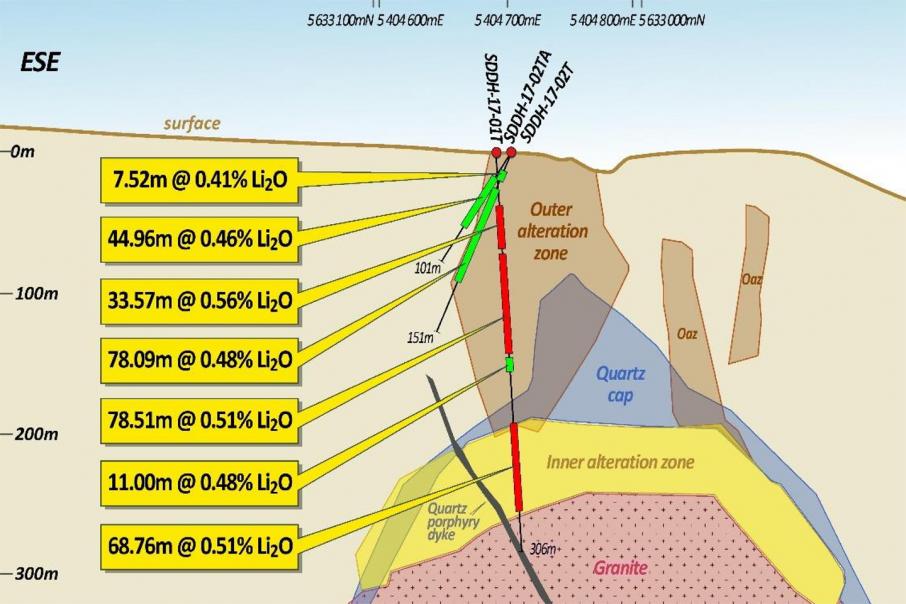 ASX listed Lithium Australia has confirmed very wide intersections of lithium mineralisation from its maiden drill program at the Sadisdorf project in far east Germany, where it shares a border with the Czech Republic.

The results were all the more impressive because quite a number of individual sample assays exceeded a grade of 0.646% lithium oxide, which was the upper limit of detection from the historical data.

The company said this bodes well for future upgrades in the lithium grade for new mineral resources versus historical estimates.

The lithium mineralisation is present as a “mica” mineral known as “zinnwaldite”, which is a common alteration mineral in the halo surrounding the historical tin mines in this region of Europe.

The drilling also encountered significant intersections of the tin mineralisation at Sadisdorf, with results up to 19.74 metres grading 0.65% tin from 83.42m down-hole.

Anomalous tungsten mineralisation was also noted in the drilling, including 15.97m grading 0.5% tungsten that was wholly within an existing ore grade lithium drill hole intercept.

According to the company, the tin-tungsten base metal mineralisation at Sadisdorf has the potential to enhance the project’s overall economic viability.

“We are advancing the Sadisdorf scoping study on the basis that our 100% owned SiLeach process can unlock the full potential of this style of mineralisation.”

“The project location can take full advantage of the rapidly developing EV industry in Europe and has the potential develop a new industry for Germany.”

The company is presently acquiring a 100% beneficial interest in the Sadisdorf deposit, which is a mothballed tin mine, containing an inferred mineral resource of 25 million tonnes grading 0.45% lithium oxide.

The project is located in the state of Saxony in eastern Germany, in close proximity to Duetsche Lithium’s Zinnwald deposit and European Metals’ Cinovec deposit directly across the border in the Czech Republic.

The Zinnwald deposit has a mineral resource of 36.4 million tonnes grading 0.64% lithium oxide.

The location of Lithium Australia’s Sadisdorf project is very significant based on its proximity to the rapidly expanding European electric vehicle and battery industries, of which lithium is such a critical component.