Lithium Australia has identified lithium and tantalum mineralised pegmatite dykes over a 5km strike in shallow historical tourmaline and tin mine workings at the Dudley prospect of its Kangaroo Island project in South Australia. Rock chip sampling returned assays of up to 0.43% lithium oxide, 770 ppm tantalum, 460 ppm niobium and 1600 ppm rubidium despite the strong weathering of outcrops. 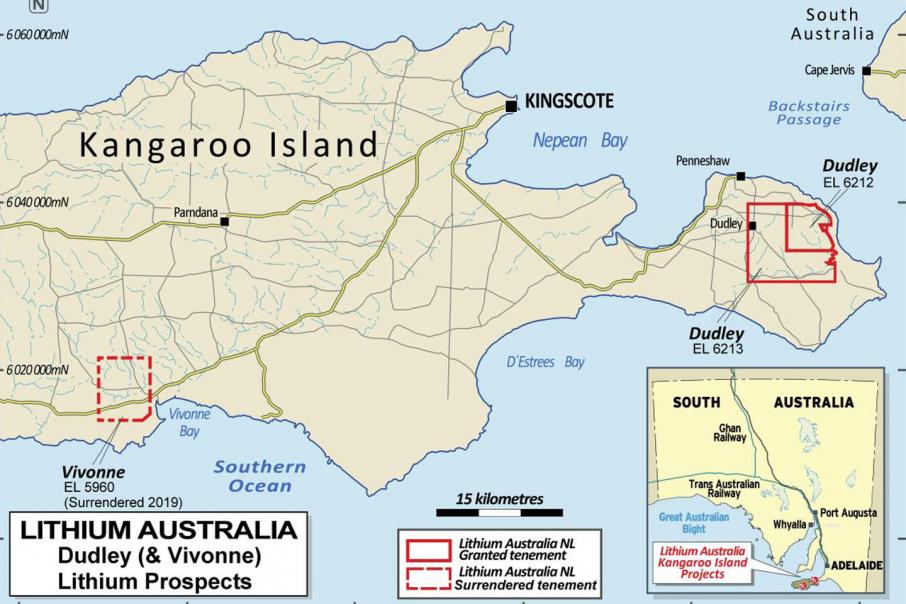 Lithium Australia has gone off the beaten track and identified lithium and tantalum mineralised pegmatite dykes in shallow historical tourmaline and tin mine workings at the Dudley prospect of its Kangaroo Island project, South Australia.

Despite the strong weathering of outcrops, rock chip sampling returned assays of up to 0.43% lithium oxide, 770 parts per million, or “ppm”, tantalum, 460 ppm niobium and 1600 ppm rubidium.

Management said the results were significant as lithium is usually leached from weathered rocks while the tantalum grades above 200 ppm are generally considered economic.

Data collected to date suggests that the workings and outcrops only expose the upper extremities of the pegmatite system and that there might be potential for spodumene mineralisation at depth.

Lithium Australia has mapped out the mineralised zone over a strike of more than 5km with individual pegmatite dykes of up to 80 metres thick.

Whilst the Dudley mine has produced gem-quality elbaite since 1899 and kaolin after 1906, it has not previously been explored for lithium or tantalum.

The company now plans to carry out a geochemical soil sampling program over the Dudley prospect and the surrounding areas where anomalous lithium values were returned from pegmatite float.

This is expected to help locate additional lithium-caesium-tantalum, or “LCT”, pegmatite dykes under cover and further determine the extent of lithium and tantalum mineralisation.

Close spaced trenching will also be carried out to improve the geological interpretation.

This work program is expected to kick off in the fourth quarter of 2019.

Managing Director Adrian Griffin said: “Early results from the Dudley prospect indicate good potential for a new LCT pegmatite field, and we look forward to extending our exploration coverage later in the year.”

Separately, the company has increased its stake in Victoria-based lithium-ion battery, or “LIB”, recycling outfit, Envirostream, to 11.76% after making a second tranche payment of $100,000.

Lithium Australia is acquiring an 18.9% stake in Envirostream for a total of $600,000 paid in four tranches.

Envirostream operates Australia’s only facility for shredding LIBs into a powder containing critical metals, which is currently exported for refining and will use the funds to expand its operations.

Lithium Australia seeks to change this by developing a hydrometallurgical flow sheet to extract nickel, cobalt, manganese and lithium compounds along with the simultaneous recovery of graphite, from the spent cathode powder in Australia.

Mr Griffin said: “Processing of spent batteries improves the sustainability of energy storage systems and is an ethical source of critical raw materials that can be directed back into the battery industry.”

“Together with Envirostream, we plan to lead the industry in environmental best practices and reduce the harm created by disposal of battery materials in landfill.”