Lithium Australia has outlined a maiden vanadium mineral resource for a portion of the Youanmi Complex near Sandstone, WA, that it has the option to purchase from Diversity Resources. The inferred resource of 185 million tonnes grading 0.33% vanadium pentoxide is near Venus Metals’ Youanmi vanadium project and was estimated using historical drilling completed by Australian Gold Resources back in 1999. 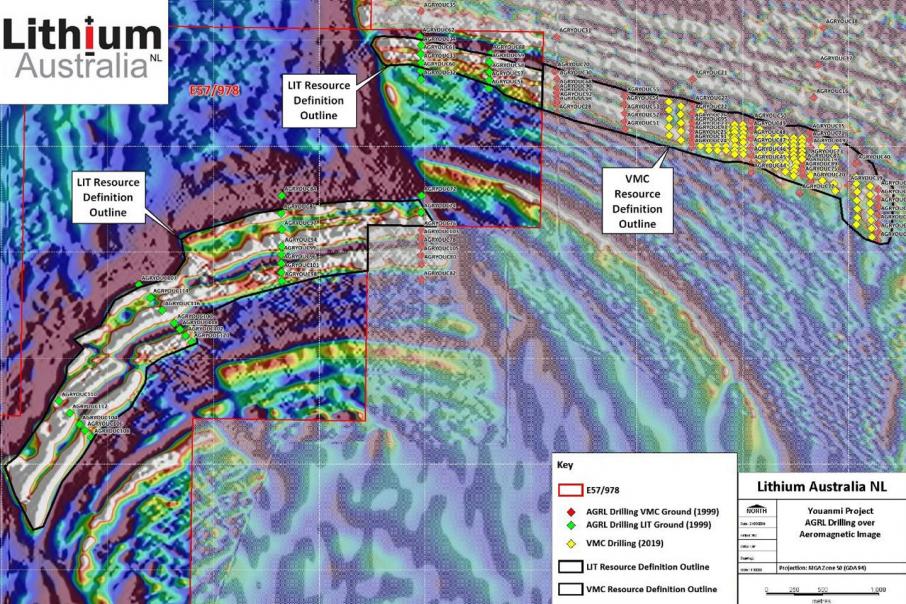 ASX-listed Lithium Australia has outlined a maiden vanadium mineral resource for a portion of the Youanmi Complex about 100km southwest of Sandstone, WA, that it has the option to purchase from private exploration firm Diversity Resources Pty Ltd.

Notably, this resource is adjacent to and geologically contiguous with Venus Metals’ Youanmi vanadium project.

The inferred resource of 185 million tonnes grading 0.33% vanadium pentoxide was estimated using open file drilling data from 41 RC holes that were drilled by Australian Gold Resources back in 1999.

Further drilling is being planned to evaluate the metallurgical characteristics of the oxide mineralisation with a focus on the potential for direct leaching of the vanadium and associated base metals.

Preliminary evaluation of the fresh material will also be undertaken.

Management said the oxidised mineralisation extends to an average depth of 40m with virtually no overburden, while the fresh mineralisation has been estimated to a depth of between 75m and 80m below the surface.

The mineralisation extends eastwards into Venus’ project, which has a global JORC-compliant oxide resource of 134.7Mt @ 0.34% vanadium pentoxide.

Venus’ work has already highlighted that the oxidised ore on its project is amenable to metallurgical leaching, which achieved extractions of up to 80% with an assay grade of 0.6% vanadium pentoxide.

Lithium Australia said that while it remains focussed on its lithium assets, it also recognises that vanadium flow batteries may be a viable alternative to lithium-ion batteries in the future.

As a result, the company has also taken prospective ground near Australian Vanadium’s Coates deposit just 35km east of Perth.

It will also evaluate the potential to form partnerships that leverage its current position with respect to vanadium assets.

In December last year, Lithium Australia secured a six-month option to acquire the three exploration licences that comprise the Youanmi project by paying Diversity $100,000. This has since been extended by another six months.

The company can acquire the licences by issuing $3.1m in scrip and granting Diversity the greater of either a gross production royalty of 2%, or $1 per tonne of material mined and processed.

Besides the vanadium resource, the southern portion of the Youanmi licences are also known to host abundant lithium-bearing pegmatites that intrude layered mafic rock sequences with drilling expected to begin here in September quarter.