Legend zeroes in on base metal systems in Fraser Range

Base metal results from Legend Mining’s infill aircore drilling program at its Crean and Worsley prospects in the Fraser Range of WA have given the company encouragement that it is zeroing in on larger mineralised systems in the district. At Crean, anomalous nickel-copper assays point to a possible magmatic intrusive ore system like the revered Nova deposit, whilst Worsley shows geology and assays consistent with a VMS system. 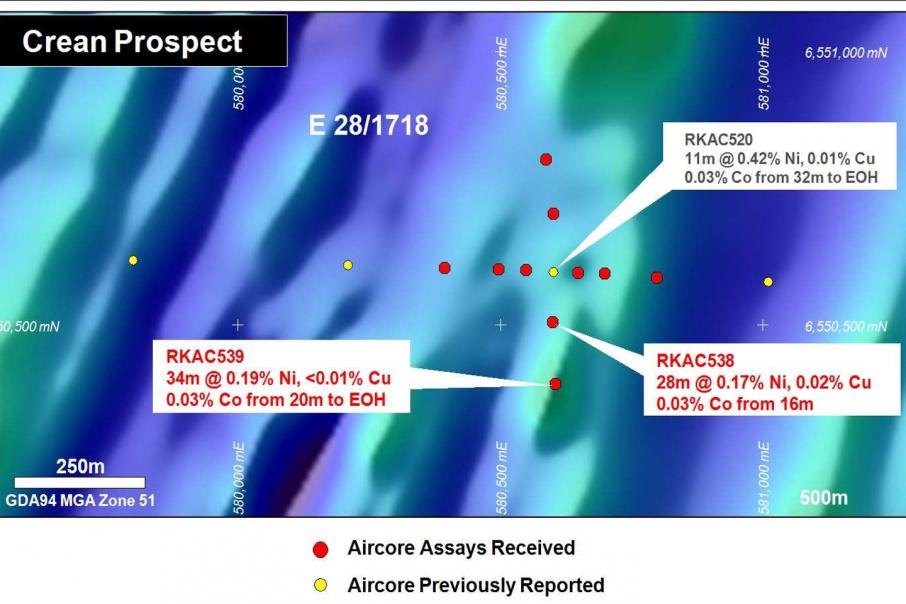 The latest base metal results from Legend Mining’s infill aircore drilling program at its Rockford South prospect in the revered Fraser Range of WA, have given the company encouragement that it is zeroing in on larger mineralised systems in the district.

The former hole also terminated in mineralisation at 54m depth.

According to the company, the assay results and rock sequences logged at Crean are indicative of a magmatic nickel-copper intrusive related style of mineralisation, not dissimilar to Independence Group’s Nova-Bollinger mine located to the southwest.

The favourable ultramafic intrusive host rock intersected at Crean is at least 200m long and remains open to the south.

Legend has planned a geophysical moving loop electromagnetic survey, or “MLTEM”, over Crean, that is aimed at delineating conductors possibly related to the sought-after massive nickel-copper sulphide mineralisation.

The company also revealed some interesting copper-zinc-silver values at the Worsley prospect, located about 9km northeast of Crean.

In 2018, Legend drilled a 9 metre intersection going 0.09% copper, 0.06% zinc and 1.47g/t silver from 88m down-hole at Worsley, which it likened to the Independence Group’s Andromeda volcanogenic massive sulphide, or “VMS”, discovery to the southwest.

Worsley is defined by a large electrical conductor, previously defined by the company in an MLTEM survey during 2017.

This week’s infill aircore drilling assays have provided good signs that Legend may be close to defining its own VMS mineralised system at Worsley.

Whilst the base and precious metal assays are modest, they provide strong chemical fingerprints for a VMS-style ore system, particularly as other elements such as lead, iron, bismuth, antimony, tin, molybdenum, sulphur, cadmium and selenium were all elevated.

The company said that combined with the strong geophysical signature at Worsley, the highly anomalous base metal assay results make the prospect a compelling exploration target for deeper drilling investigation.

Legend Managing Director Mark Wilson said: “The nickel footprint at Crean is within a major structural trend which runs from Nova in the south, past Silver Knight, up into Legend’s tenements and on into the northwestern area of the Fraser Zone.”

“This structural trend is interpreted to contain the deep structures which are fundamental to the formation of the style of deposits we are seeking.”

“The new assays from Worsley add an extra dimension to the VMS potential. Both infill programmes have provided valuable information for future works.”