Legend Mining’s ongoing drill campaign at Mawson continues to paint a picture of a mineralised system growing in both scale and grade with the latest drill hole intersecting over 26m of nickeliferous sulphide in RKDD027. The visually spectacular drill core includes 15.45m of massive sulphides, across three zones of mineralisation, and a further three zones of 10.80m of semi-massive and matrix sulphide - the hunt continues across the Mawson discovery in WA’s Fraser Range. 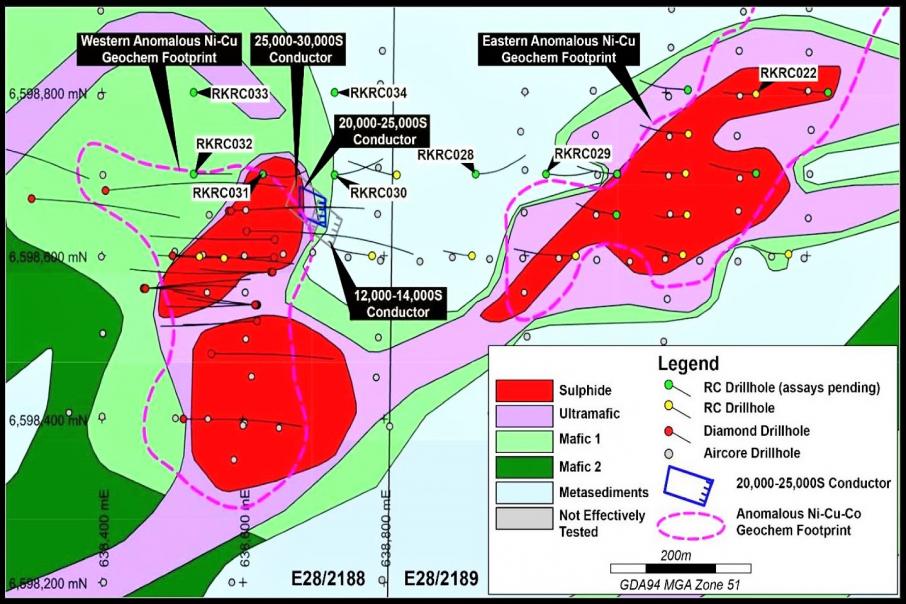 A plan showing the distribution of drilling and nickel mineralisation across the Mawson prospect. Credit: File

Legend Mining’s ongoing drill campaign at Mawson continues to paint a picture of a mineralised system growing in both scale and grade with the latest drill hole intersecting over 26m of nickeliferous sulphides in RKDD027. The visually spectacular drill core includes 15.45m of massive sulphides, across three zones of mineralisation, and a further three zones of 10.80m of semi-massive and matrix sulphide.

These drill intercepts extend the company’s run of exploration success at Mawson, with additional significant sulphide intercepts in drill hole RKDD025. The current program of diamond drilling at Mawson is designed to test the extensions of the nickel-copper sulphide mineralisation across the prospect area.

“The material widths of the intercepts in hole 27 speak to our confidence of the size potential of the Mawson system, whilst the information from the other reported holes is adding to the bigger picture.

“We are planning to release a 3D model of Mawson shortly which will visually depict the scale potential of Mawson in 3D for the first time. This model will aggregate data interpretations from the detailed gravity, magnetics, geochemistry and structural geology.”

Legend’s high-profile Mawson nickel sulphide discovery forms part of the company’s Rockford Project and covers more than 3,000 square kilometres of the revered Fraser Range in Western Australia. Rockford is located 250km east of Kalgoorlie and is a prime hunting ground for intrusive-related nickel sulphide deposits, which includes Independence Group’s nearby Nova-Bollinger mine.

Ongoing exploration continues to return an intriguing array of nickel intercepts from Mawson, with aircore, reverse circulation and diamond drilling having delineated two distinct zones of mineralisation at the discovery which extends over more than 1km of strike.

While most of the exploration activity has focused on the Mawson West target, where both reverse circulation, or “RC” drilling and diamond drilling have met with ongoing success regularly intercepting nickel and copper sulphides, the Mawson East target area has been defined by more modest and shallow aircore and RC drilling.

On the western target zone at Mawson,  infill drilling has continued at a rapid clip with seven infill and step-out RC holes being completed across the prospect, intersecting the targeted gabbronorite intrusive units with ‘net textured’ nickel sulphides indicating the potential presence of nearby massive sulphide mineralisation.

Five diamond holes have also been completed across the prospect in recent weeks, with drill holes RKDD023, 25 & 26 testing a series of electromagnetic targets on the north-eastern margin of the Mawson West anomaly. Drill holes RKDD024 & 27 also continue to test the depth extensions of the target along its southern extensions.

The most recent drill hole, RKDD027 which has also captured the most attention, intersected several stunning zones of matrix to massive nickel sulphide mineralisation. RKDD027 was designed to infill on previous drilling in the southern prospect area and test the continuation of the sulphide lodes previously intersected in RKDD17 – it clearly did that and more.

The main zone of mineralisation in RKDD027 kicks off 153.7m downhole and continues to 176.45m - a 22.75m thick intercept which hosts two massive sulphide lodes. The other mineralised zones commence at 188.85m, 215.8m and 231.8m respectively and are up to 6.35m wide. These intercepts also show matrix to massive sulphide mineralisation with the drill core from RKDD027 currently being logged and sampled for assay.

Drill hole RKDD025 was designed to test a down-hole electromagnetic, or “EM” target highlighted above RKDD023. Drilling intersected a zone of sulphide mineralisation between 217.10 to 223.31m down-hole, which also included massive sulphides. Subsequent geological logging and down-hole EM surveys indicate that the drill hole has clipped the edge of the EM target and further drill testing of the target is likely required to bulls-eye this new sulphide lode.

Drill holes RKDD023, 24, 25 and 26 have provided important geological and structural data for ongoing modelling, intersecting varying quantities of disseminated sulphide mineralisation and extending the envelope of the mineralised system. These holes will also facilitate down-hole EM to assist in future targeting.

Diamond drilling to date confirms the continuation of the Mawson West sulphide system at depth, indicating that it also remains open along both the northern and southern interpreted strike extensions to the system.

Legend is looking forward to a strong flow of results in the lead up to the end of the year with pending news set to include the results from ongoing drilling and down-hole EM surveys. The company is also putting together structural and 3D modelling of the Mawson prospect that will assist in the future targeting of drill holes, however with a bevy of sulphide samples in the lab, Christmas may come early for this budding nickel explorer as it continues work across its Mawson discovery.