Legend Mining has bounded into the new year releasing its best nickel intercept to date from the company’s Mawson discovery in WA’s Fraser Range. The drill bit has carved out a 31.1 metre string of massive sulphide core which weighs in at an impressive 2.80 per cent nickel and 2.04 per cent copper from 200.7 metres down-hole, pointing to the deeper potential of the ore system. 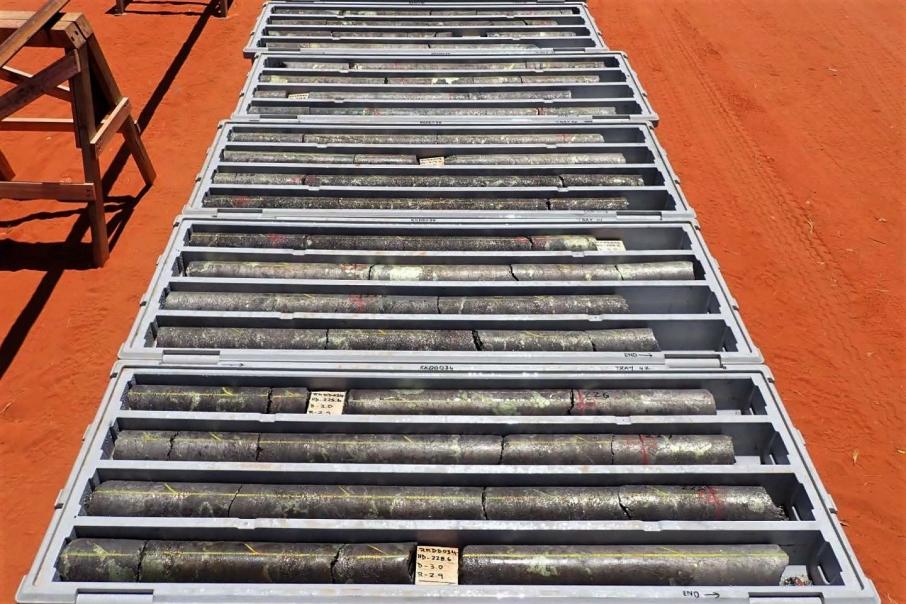 Legend Mining has bounded into the new year releasing its best nickel intercept to date from the company’s Mawson discovery in WA’s Fraser Range. The drill bit has carved out a 31.1 metre string of massive sulphide core which weighs in at an impressive 2.80 per cent nickel and 2.04 per cent copper from 200.7m down-hole. In total, the drill hole intersected over 80m of nickel-copper mineralisation and confirmed the presence of multiple high-grade lodes at the discovery.

Drill hole RKDD034 encountered four separate sulphide lodes extending from 114m to 241m down-hole with additional notable intercepts including 24.7m at 1.06 per cent nickel and 0.72 percent copper from 114m and 23.55m at 1.20 per cent nickel and 0.85 per cent copper from 172.55m. The overall thickness and grade of the sulphides in RKDD034 hints at the deeper potential of the sulphide system at Mawson.

Legend Mining Managing Director, Mark Wilson said:“These assay results are further confirmation of our earlier assessment that hole 34 is the best hole drilled at Mawson to date. The combination of the widths and grades of the massive sulphides in this hole support our conviction that we are dealing with a mineralised system of substance at Mawson. The purpose of the hole was to conduct Phase 1 metallurgical tests and the results of this test work will be reported once received.”

“Meanwhile further assay results from 2020 drilling programmes are rolling in for compilation and assessment. Once integrated with existing data, they will assist in future drill planning for the 2021 field season.”

The nickel potential of the Fraser Range was uncovered less than ten years ago following the discovery of a number of intrusive-related sulphide deposits buried beneath the sands of the remote region, which lies around 250km to the east of the regional mining centre of Kalgoorlie. Exploration to date has outlined a string of discoveries along more than 100km of strike, the most significant of which includes the famed Nova-Bollinger nickel-copper-PGE mine and now, Legend’s Mawson discovery.

Legend’s aggressive exploration campaign at Mawson has uncovered an extensive zone of nickel mineralisation associated with a large intrusive, mafic-ultramafic body which displays strong geological similarities to the nearby Nova discovery. The mineralised zone at Mawson covers an area more than 1,200m long and 500m wide with the geochemical footprint of the discovery remaining open to the north-east and begging for further investigation in 2021.

Drilling at Mawson has continued to define the nickel-copper mineralisation both along strike and at depth. With an innovative combination of structural logging and geophysics assisting in the creation of a ground-breaking three-dimensional model of the ore system, the company has defined a wealth of new targets for the ongoing exploration program.

Legend is now looking to advance the development of Mawson with drill core being sampled for metallurgical test work and the company is neck deep in the design of the 2021 drilling program across the discovery. Legend will likely be seeking to produce an estimate of a maiden resource over the discovery as one of its highest priorities during the course of the year .

However, with the results from RKDD034 pointing to a deeper sulphide target, Legend is likely to divert some of its efforts to continue the hunt for the intriguing source of the high-grade sulphide mineralisation at Mawson and potentially zero in on the mother-lode at its Fraser Range discovery.