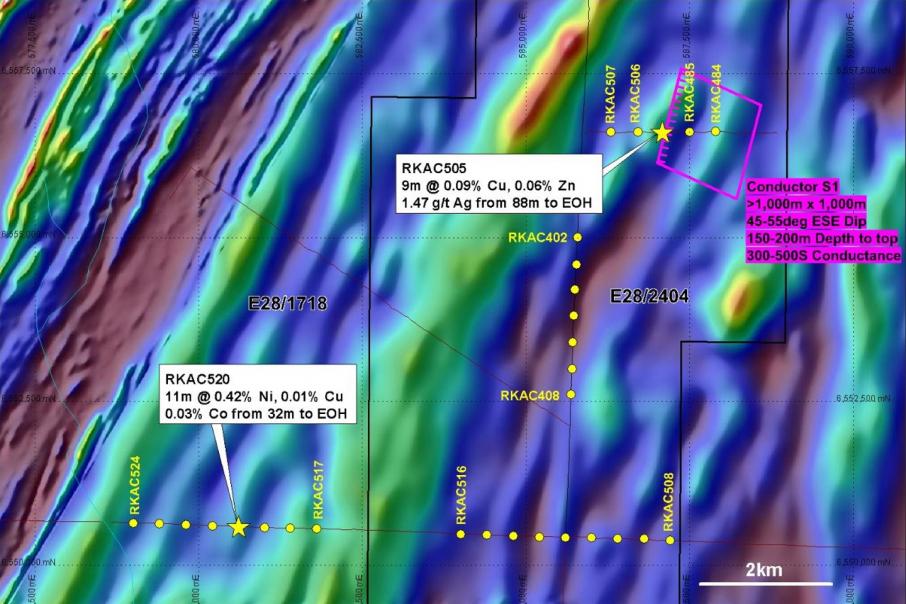 This drill hole was part of a wide-spaced east-west drilling section that was testing a geophysical aeromagnetic low and gravity high, that the company interpreted as a possible mafic-ultramafic intrusive rock sequence.

The new intersections also contain elevated assays of the element chromium, which is a typical pathfinder for these styles of intrusive rocks, particularly in the Fraser Range.

According to Legend, this suite of anomalous geochemistry in the southern section of the Rockford project area, demonstrates the prospectivity for Nova Bollinger style economic accumulations of massive sulphide nickel-copper mineralisation within its tenements.

The massive Nova-Bollinger deposit is located about 100km southwest of the new assay results in a similar geological setting.

The company will now complete infill aircore drilling adjacent to the anomalous drill hole, in order to better define the extent of the elevated geochemical signature and favourable rock sequences it has intersected.

9.5km to the northeast of the first result, Legend completed a drilling traverse above a strong, conductive anomaly at its Area S prospect and unearthed an intriguing 9 metre intercept elevated in copper, zinc and silver mineralisation.

Management said the sulphide content appears to increase with depth down the vertical hole and may help explain the strong electrically conductive plate identified at depth in this area.

The result is important because it may represent a nearby occurrence of volcanogenic massive sulphide or “VMS” mineralisation at the Rockford project, similar to Independence Group’s impressive Andromeda massive copper-zinc discovery, just a stone’s throw away to the southwest.

Legend is also targeting this style of VMS mineralisation at its own Shackleton prospect, about 22km west of Area S.

With confirmation of the anomalous mineralisation coinciding with an electrical conductor at depth in the vicinity of Area S, the company said the prospect has become a high priority RC and diamond drilling target for 2019.

“The copper-zinc-silver above the S1 conductor is very complimentary to the work we are doing (nearby) at Shackleton. This has broadened the base of both styles of known anomalous mineralisation for follow up work next year.”