Legend Mining has discovered a second, larger nickel-copper mineralised intrusive of magmatic sulphides within a host rock similar to the famed Nova-Bollinger deposit, at its Rockford project in the Fraser Range. The new results cover an area of 300m by 100m, with shallow anomalous drill intersections up to 36m @ 0.39% nickel, 0.23% copper and 0.04% cobalt, containing disseminated sulphide mineralisation. 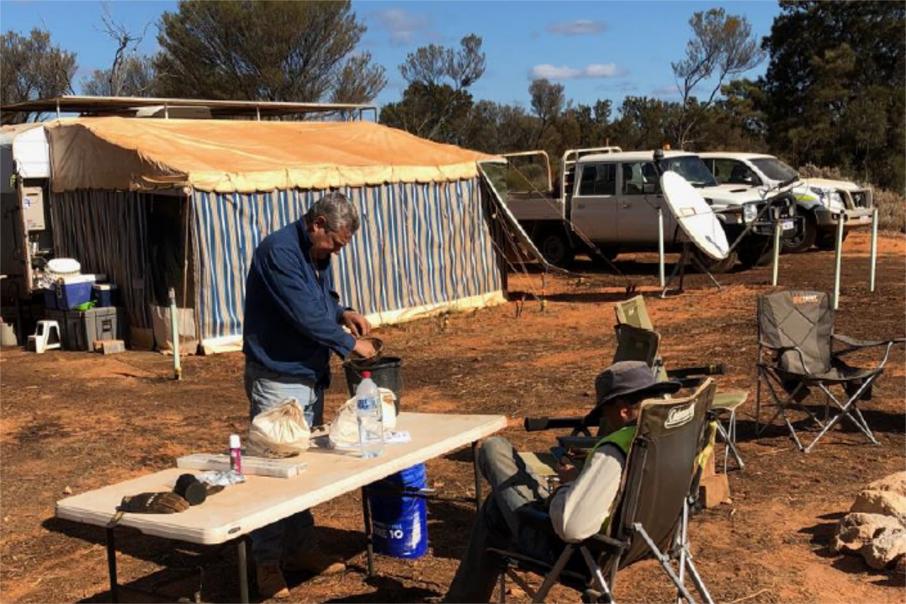 Legend staff in the field at the Rockford project camp, Fraser Range

The company has now confirmed the presence of the sought-after disseminated magmatic sulphides in a zone over 100m wide in a gabbronorite rock sequence similar to the famed Nova nickel deposit.

Legend also reported that it had received assays and petrological results that confirm a second mineralised intrusive, 1.8km south-southeast of this week’s new results.

Managing Director Mark Wilson said: “We now have a significant >0.2% nickel and >0.1% copper footprint around holes 151 and 183 including a >100m wide zone of visible sulphides in the same host rock as the Nova-Bollinger orebody.”

“These are outstanding outcomes from our ongoing aircore drilling programme. The further confirmation of a second mineralised intrusive around holes 167 and 230 is another positive outcome and supports the premise of multiple prospective intrusions at Area D”.

The company’s 2018 aircore drilling program focussed on Area D and is targeting selected high-priority aeromagnetic and gravity geophysical features, with a total of 95 holes now completed since March.

Recent drilling has concentrated on infilling the two areas of identified anomalous nickel-copper-cobalt mineralisation to test for a larger intrusive system in the very prospective region.

Importantly, Legend has now defined the northernmost nickel-copper anomaly over an area of 300m by 100m, giving the company a platform to define a potentially sizeable ore system here, if the grades stack up.

The southernmost anomaly contains elevated chromium up 0.89%, which the company has interpreted to represent a separate intrusive body, supporting its theory of multiple prospective intrusions being present at Area D.

With the completion of the aircore drilling program at the Area D prospect, Legend will now concentrate on targeting other aeromagnetic and gravity features over interpreted mafic-ultramafic rock sequences within its Rockford project tenement holdings.

The confirmation of the second intrusion is potentially a game-changer for the company and indicates it is holding some very interesting looking territory in its hunt for another Nova-Bollinger style deposit in its own corner of the Fraser Range.