Legend Mining has outlined the prospectivity of two advanced-stage nickel-copper sulphide occurrences within its proposed “Ponton JVA 2019” joint venture tenements with the Creasy Group in the evolving Fraser Range province in WA. The company revealed strongly anomalous drill intersections generated from the Octagonal prospect, including 82m @ 0.18% nickel, 0.15% copper and 0.01% cobalt from 168m down-hole. 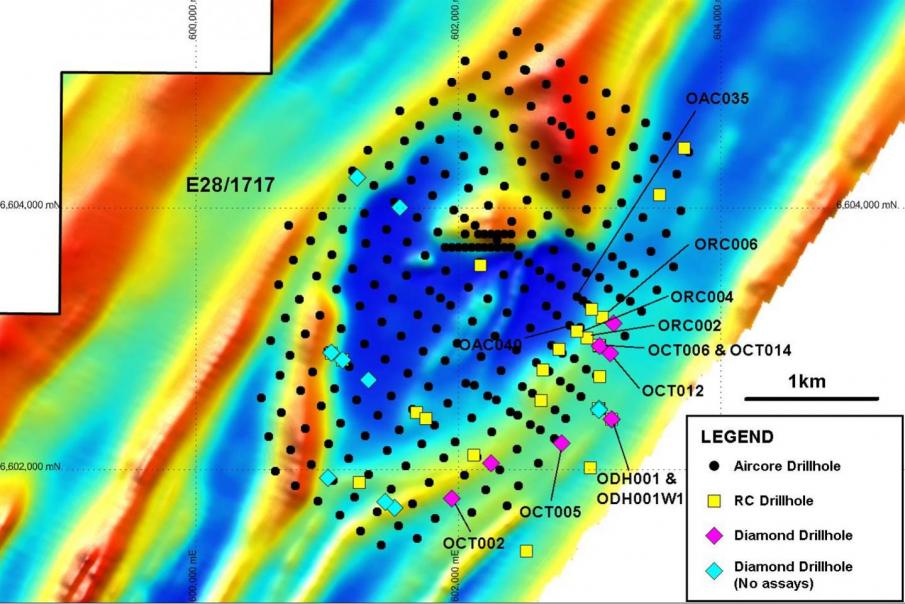 The company has announced some strongly anomalous drilling intersections generated by the Creasy Group at the Octagonal prospect.

The company said that Octagonal has a similar aeromagnetic signature to the revered Nova ore system located to the southwest and that drilling to date has delivered multiple intersections of massive, semi-massive and stringer nickel, copper and iron sulphide mineralisation within rock sequences analogous to Nova.

The Creasy Group has expended about $15m within the Ponton JVA 2019 tenements to date, with the majority of that at Octagonal and the nearby Magnus prospect to the northeast, both of which contain a characteristic oval or eye shape, similar to Nova, as part of their aeromagnetic palette.

The field programs at Octagonal have been extensive with detailed airborne and ground electromagnetic, induced polarisation and gravity geophysical surveys, followed by aircore, RC and diamond drilling campaigns.

While the drilling at Octagonal to date has only shown discontinuous, sub-economic accumulations of nickel-copper mineralisation, the prospect demonstrates all the fingerprints of a “fertile” magmatic ore system, according to Legend management.

The company also provided a background on the previous work at Magnus, which, whilst less advanced than Octagonal, lies within the same rock package and along strike from that defined mineralisation and hence, looks ripe for further detailed evaluation and potential base metal discoveries.

No electromagnetic geophysical surveying has been undertaken at Magnus to date and the prospect has only seen shallow programs of aircore drilling and very limited RC and diamond drill testing thus far.

Legend will be no doubt keen to get its teeth stuck into these areas, pending approval of the key terms of the Ponton JVA 2019 deal, to be voted on by shareholders in late September.

Pending this approval, the company will then acquire a 70% interest in the two tenements by issuing 55.55m shares at 3.6 cents to Creasy, raising $2 million.

Legend will also be required to issue $10m worth of its shares to the Creasy Group at the same price upon the delivery of a bankable feasibility study at the project and a decision to mine on the tenements that are subject to the JV.

The ground is contiguous to the company’s existing Rockford base metals project in the Fraser Range.

Discussing the high-calibre drill assays from the Octagonal prospect, Legend Managing Director Mark Wilson said: “The results clearly demonstrate … that Octagonal is now the third publicly disclosed example of massive nickel-copper mineralisation identified to date in the Fraser Range (along with Nova and Silver Knight) and that Magnus has the right host rocks for the mineralisation we are seeking.”

“Our first task will be to conduct our innovative moving loop electromagnetic (MLTEM) surveys over both prospects. The interpretation of conductors identified in these surveys will be greatly enhanced by the known geological characteristics already identified in the work by the Creasy Group”.