Legend Mining has revealed that massive sulphide mineralisation has been intersected during diamond drilling at its D5 conductor, located at the Rockford project in the Fraser Range of WA. The company intersected an almost 10m wide zone of significant nickel-copper sulphides from 110.3m down-hole and the diamond rig will now move onto the D1 conductor. The company says that D1 is a very strong, discrete geophysical feature. 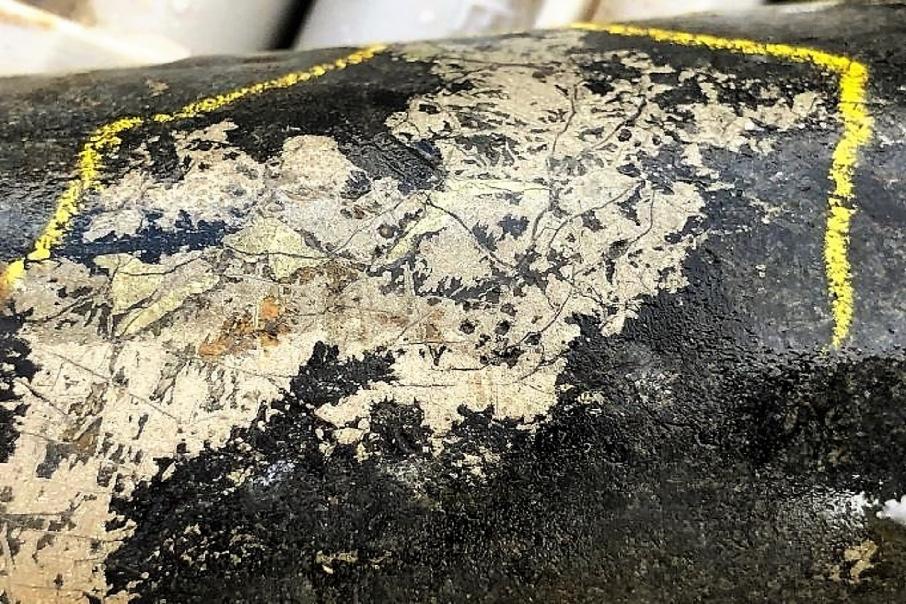 ASX-listed explorer, Legend Mining, has discovered massive sulphide mineralisation in diamond drill core at its Rockford project in the Fraser Range of Western Australia. The lucrative looking 9.6 metre-wide sulphide zone was spotted in the first diamond hole at the D5 prospect.

The company said the drill rig pulled up the zone of significant disseminated and “blebby” nickel-copper sulphides from 110.3m down-hole. The sulphide minerals are hanging around in a mafic geological intrusion, which is a key conceptual rock that the company has been searching for, as it is known to host particularly rich accumulations of metals elsewhere in the region.

Legend Managing Director Mark Wilson said: “This is a good hole. The first key takeaway is that it has intersected a nickel-copper system in the right host rock for the mineralisation we are looking for. The second is that the location of the sulphides is interpreted as the basal contact between the gabbronorite and the metasediments, which is textbook for where it should be”.

The disseminated, blebby style of mineralisation is consistent with remobilised nickel and copper that could be sourced from a more massive body of ore that may be waiting to be discovered close by.

The nickel-copper explorer routinely conducts down-hole electromagnetic, or “DHEM, surveys, which should assist the company to hone in on any proximal massive sulphide targets.

DHEM surveys measure the electrically chargeable physical properties of the surrounding rocks and have the capability of detecting the presence of dense ore minerals such as chalcopyrite – which is a copper iron sulphide.

The source of the conductor is now confirmed by visual logging and down-hole EM as graphite and pyrrhotite bands within footwall sediments.

The diamond rig will now move onto the D1 conductor, which Legend says is a very strong discrete geophysical feature.

Limited aircore drilling over the D1 prospect brought up similar rock sequences to those in the D5 hole, providing a touch of excitement for the Legend field team.

The Rockford project is located about 280km east of Kalgoorlie and covers nearly 3,100 square km, with the bulk of the project under a JV agreement between Legend, with 70% and renowned “prospector” Mark Creasy, who holds the balance.

Whilst the key goal for Legend at Rockford is the discovery of a Nova-style nickel-copper deposit, Tropicana style gold deposits are also on the radar for the Legendary Geological team.