Legend Mining’s strategy at its Mawson nickel discovery in WA continues to pay dividends, with first-pass metallurgical test work knocking out high-grade nickel and copper concentrate samples. Recent test work produced two critical products, with the primary stream yielding a concentrate grading an impressive 13.1 per cent nickel, whilst the secondary stream delivered a copper concentrate weighing in at a stunning 31.8 per cent copper. 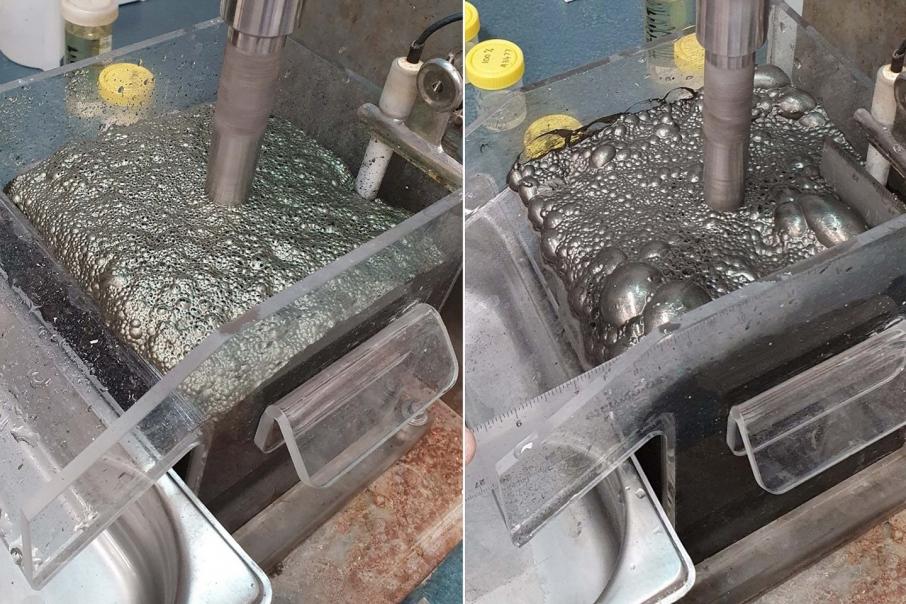 Mawson sulphide concentrates being float tested – copper on the left, nickel on the right. Credit: File

Legend Mining’s strategy at its Mawson nickel discovery in WA continues to pay dividends, with first-pass metallurgical test work knocking out high-grade nickel and copper concentrates. Recent test work produced two critical products, with the primary stream yielding a concentrate grading an impressive 13.1 per cent nickel, whilst the secondary stream delivered a copper concentrate weighing in at a stunning 31.8 per cent copper.

Both products show high metal recoveries and are low in contaminants, earmarking the potentially saleable concentrates as hot property in the sizzling metal markets.

In recent months, the global appetite has grown for base metals as the world learns to cope with a raft of pandemic restrictions and regular supplies of nickel, copper, lead and zinc being disrupted by lockdowns across the globe. Nickel and copper prices have been star performers throughout these challenges, with copper reaching an 8-year high this week, trading at over US$8,200 a tonne and nickel now tipping the scales at more than $18,500 per tonne – dangerously close to boom territory.

After some years of exploring and preparing, Legend has landed on its feet with its Mawson project, which is now at a very advanced stage, coinciding with the booming market.

Legend Mining Managing Director, Mark Wilson said:“The results of this first met test work have demonstrated that premium nickel and copper concentrates can be produced by conventional means from Mawson samples. The successful outcome of this work has significantly advanced and de-risked our project.”

Whilst the Fraser Range also hosts IGO’s coveted Nova-Bollinger nickel mine and a smattering of other developing discoveries, it has been Legend’s Mawson discovery that has stolen the show, with exploration turning out a wealth of high-grade drill intercepts. Best numbers include 31.1 metres at 2.80 per cent nickel and 2.04 per cent copper from 200.7m down hole, from recent drilling.

The company’s exploration program has outlined nickel and copper mineralisation across more than 1km of strike over the western domain of the Mawson discovery and whilst the company continues to unravel the geological complexities of its sulphide find, management has bitten the bullet, launching into preliminary metallurgical testing and perhaps signalling a move into more detailed economic studies in the not-too-distant future.

Legend engaged renown consultants, Strategic Metallurgy in Perth to undertake its first-pass test work and it would appear that Strategic has delivered in spades with its first-pass base metal concentrate from the Mawson sulphide ores.

Test work utilised a bulk sample from the above-mentioned drill hole, with the drill core crushed and ground prior to being run through a bench-scale circuit based on the processing flowsheet utilised at IGO’s Nova operations. The primary aim of the program was to separate the base metal sulphides from the barren country rock and iron sulphides to reduce volume and increase grade via conventional floatation processing.

Additional finessing and selective floatation of the bulk concentrate then produced two separate and highly desirable concentrate products, with the copper-rich concentrate grading at over 31 per cent copper and recovering more than 84 per cent of the contained metal whilst the nickel stream graded in excess of 13 nickel with over 80 per cent of the metal recovered.

Legend management believes ongoing test work will continue to improve on the current metallurgical results even further as exploration and development continues across the emergent nickel discovery.

With the potential issue of creating a saleable nickel product from the Mawson ores now put to bed, further de-risking the discovery, Legend looks set to continuing tugging on the tiger’s tail in southern WA. The company will kick off extensional and infill drilling across its discovery in the coming weeks, hinting at a busy year ahead as the market awaits the unmitigated declaration of the next metal boom.