Legend Mining has outlasted the field of Fraser range hopefuls that flocked to the area after Sirius Resources discovered the heralded Nova nickel and copper deposit. They mostly came armed with one shot in the locker and most walked away with their tails between their legs. Legend’s staying power and methodical, almost obsessive attention to geological detail, however, has finally heralded results with a cracking new discovery in the area. 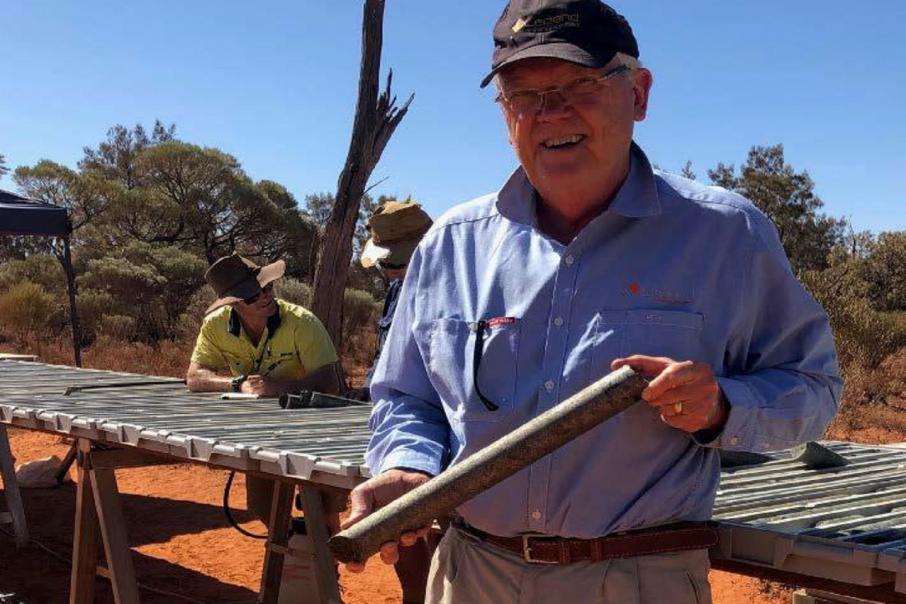 Legend Mining has outlasted the field of Fraser range hopefuls that flocked to the area after Sirius Resources discovered the heralded Nova nickel and copper deposit. They mostly came armed with one shot in the locker and mostly walked away with their tails between their legs. Legend’s staying power and methodical, almost obsessive attention to geological detail, however, has finally heralded results with a cracking new discovery at its Rockford project.

The intercept is surrounded by a wide, 70-meter zone of disseminated sulphides and comes courtesy of the third diamond hole drilled into what is now known as the Maswon prospect.

Legend management said this week that the 70m zone has all the hallmarks of a “large mineralised system.”

Perhaps most importantly, the mineralisation in this discovery hole is still open in all directions, which is very exciting for the Perth based ASX listed company that has been plugging away in the Fraser Range for some time now.

Its in-field team, led by Managing Director Mark Wilson, has been painstakingly learning from its unsuccessful holes and reinventing its campaign based on each semi-successful hole, resulting in this weeks stellar looking and still developing find.

Legend’s Stock tripled in early trade on the ASX today to around 12c a share, settling back to just over 8c a share by the afternoon, around double the previous day’s closing price.

Mr Wilson said: “This discovery hole at Mawson is an outstanding exploration success and a watershed moment for all Legend stakeholders and indeed all of the Fraser Range…”

“Mawson lies within a 16km x 6km magnetic feature within a distinctly different stratigraphic package of rocks from the other known Fraser Range occurrences of massive sulphides at Nova, Silver Knight and Octagonal.”

To rapidly turn the assay results around for this important diamond drill hole, Legend has only sent 30 meters of the most mineralised-looking core to the laboratory for analysis.

There is still a way to go here and the initial assays may just be the tip of the iceberg for Legend.

The company is also undertaking some high-tech appraisal of its core with its Geologists hitting the rocks in-field with an ultra-high-speed “microXRF” to determine the sulphide mineral type, style, texture and distribution. This information can be used to understand where the drill hole is located in the ore system space and assist in vectoring towards the next potentially lucrative hole.

Legend has been systematically exploring its Fraser Range play since the industry awoke to its presence following Sirius’ 2012 Nova discovery. Sirius was subsequently taken out by Independence in 2015 for a tidy $1.8 billion.

Independence seems convinced too that the Fraser Range is harbouring more than just one Nova deposit and to that end, it has an almost blanket landholding now– including exposure to Legend’s Mawson ground with a 14.18% shareholding in Legend.

Wiley “prospector” Mark Creasy is the other big Fraser Range player, having kicked rocks around the region since 1979 – Creasy has a good swag of Legend too with a 26.85% shareholding.

Mineral exploration is sometimes described as an exciting folly using other people’s money that usually ends in tears. This has certainly been the case with many of the other small caps who managed to get one capital raise away based on their Fraser Range holdings after Novo.

However, with such a vast area to explore across the Fraser Range, it was only ever going to be those with the exploration smarts, the cash backing and the underlying belief and determination to go the distance, that would still be standing when the music stopped.

Hats off to Legend for going the distance – now for the full extent of the discovery.