Just a fortnight on from its $20 million capital raise, ASX-listed Legend Mining is back in the field with a 3-kilometre RC drill program. Recent aircore assays include drill hits such as 25m at 0.35% nickel, 0.17 per cent copper and 0.04 per cent cobalt from 64m along the eastern flank of a large gravity anomaly at its Mawson nickel-copper prospect. 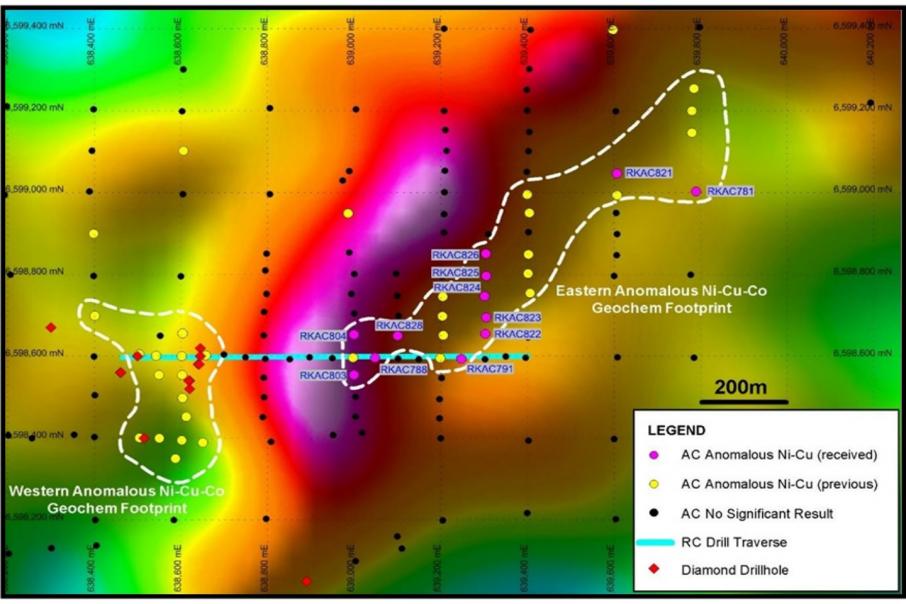 Just a fortnight on from its $20 million capital raise, ASX-listed Legend Mining is back in the field with a 3-kilometre RC drill program at its Mawson nickel-copper project in the Fraser Range.

Recent assays from the project include air core drill hits such as 25m at 0.35% nickel, 0.17 per cent copper and 0.04 per cent cobalt from 64m along the eastern flank of a large gravity anomaly at Mawson.

Following up a recent massive 30m sulphide drill intercept, Legend said the two significant aircore holes were still in sulphides at the end of each hole.  The second hit was 15m at 0.29 per cent nickel, 0.12 per cent copper and 0.02 per cent cobalt from 60m.

Legend Mining Managing Director, Mr Mark Wilson said recently; “This RC programme is an important step in the development of the Mawson story. RC drilling is cheaper and quicker than diamond, yet still provides a platform for downhole EM and allows for diamond tails to chase deeper targets that are identified.  It is important to note that it will give us new information on the known sulphide mineralisation, the eastern geochemical footprint and the gravity features.”

“The new aircore assays show a developing eastern geochemical footprint. There is now a cluster of holes around holes 823 and 825 with assay results equal to or better than the best ones in the western footprint. These assays have upgraded the prospectivity of the Mawson eastern footprint.”

The Mark Creasy corner-stoned Legend has been methodically closing in on the source of its already significant nickel/copper/cobalt hits at Mawson, with punters already hopeful that the discovery may emulate Sirius Resources stunning Nova-Bollinger nickel-copper discovery a few years ago.

The company is wasting no time moving to firm up the full extent of the Mawson target now its saddle bags are brimming with cash.  Management said the RC drilling underway at Mawson will test three targets within an initial west to east traverse; namely the upper Ni-Cu sulphide zone between two diamond holes, the main gravity high and finally the eastern aircore nickel-copper geochemical anomaly.

The company said it will take 4-6 weeks to complete the current RC drill campaign and its diamond rig has been stood down in the interim.

As good as Legend’s recent numbers have been, Managing Director Mark Wilson believes he is still on the outskirts of the source of the mineralisation.