Legend Mining’s innovative exploration approach at its Mawson nickel find in WA is paying tremendous dividends, with drilling across the prospect area intersecting massive sulphides more than a kilometre east of the original discovery zone. Drilling has returned intervals of semi to massive sulphides up to 13.2 metres thick, containing both nickel and copper sulphides, with samples now being expedited through the labs. 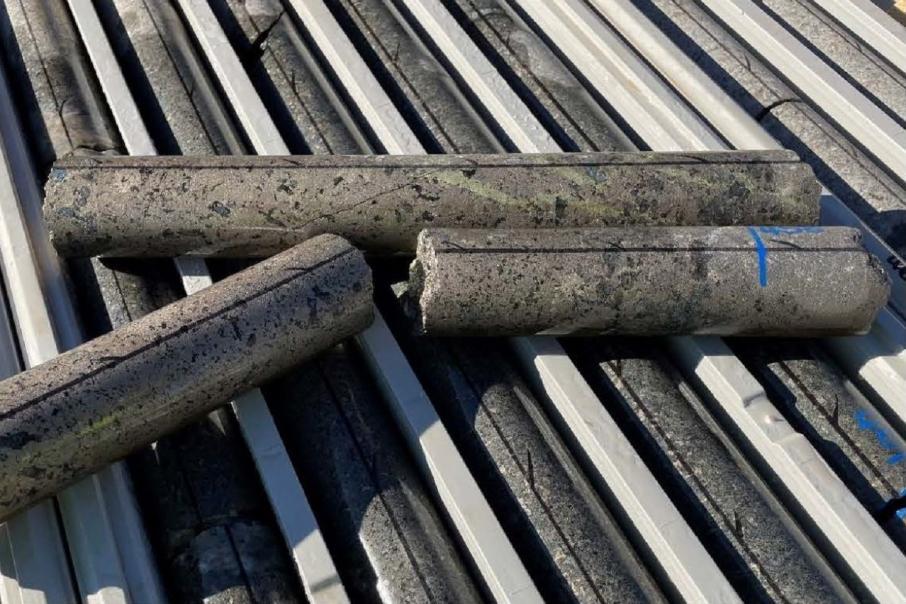 Legend Mining’s innovative exploration approach at its Mawson nickel find in WA is paying tremendous dividends, with drilling across the prospect area intersecting massive sulphides more than a kilometre east of the original discovery zone. Drilling has returned intervals of semi to massive sulphides up to 13.2 metres thick, containing both nickel and copper sulphides, with samples are now being expedited through the labs.

The sulphide intercepts come from two new targets that form part of the Mawson East prospect. They were identified by a blend of geochemistry and geophysics that highlighted a raft of targets for drill testing. The initial target was tested by drill hole RKDD043,  which lies around 400 metres to the east of the Mawson West discovery.

Drill hole RKDD043 has punched through a relatively shallow electromagnetic, or “EM” target at the southern end of the expansive Eastern Intrusive Chonolith, which ongoing drilling has revealed contains a  significant endowment of sulphide mineralisation.

Incredibly, RKDD043 intersected a zone of sulphides more than 180 metres thick with geological logging showing the interval to host disseminated to massive sulphides from just 79.7m down-hole. Better intervals from the drill intercept include semi to massive sulphides between 170.1m and 183.3m depth, giving the company a decent first-pass intercept to sink its teeth into.

The second sulphide intercept is however, arguably the most exciting. It intersected massive sulphide mineralisation more than 1,200m east of the Mawson discovery zone. The top section of the drill hole intersected weak disseminated sulphides between 92m and 381m, however the drill bit then chewed into a “heavily mineralised” gabbronorite at a depth of 437.9m, with nickel mineralisation extending over an interval of 38.85m.

Within this mineralised intercept, logging shows net-textured to massive sulphides over a 4.9m interval from 453.2m down-hole, hinting that perhaps the Mawson East prospect may eclipse its western neighbour as the company’s drilling campaign gains pace in the coming weeks.

“The distance between these holes and the discovery zone, along with the developing story from downhole EM surveys, continue to demonstrate a very large system driving Mawson, which is consistent with the potential of a significant deposit.”

The company’s Mawson nickel sulphide discoveries form part of Legend’s Rockford base metals project in Western Australia, where its tenure covers more than 3,000 square kilometres of the coveted Fraser Range. The company shares the province with a number of other explorers and miners, however much of the remainder of the terrane is held by IGO Ltd, owner of the revered Nova-Bollinger nickel-copper discovery.

The Nova mine sits around 120km to the south west of Legend’s Mawson prospect and provides an example of the riches up for grabs in this famed terrane, with both IGO and Legend now racing to unearth the next major discovery in the province.

Interestingly, Legend looks to have gained an edge in its sulphide hunt via its program of detailed 3D modelling of the Mawson geology and mineralisation, which it uses as a targeting tool.

Utilising an innovative fusion of EM and gravity surveying, combined with a burgeoning dataset of geological logging and geochemical sampling, Legend has begun to unravel the structure underlying Mawson, allowing it to efficiently target the nickel and copper-rich lodes that lie beneath the desert sands in the region.

Legend’s ground-breaking approach to exploration in the Fraser Range is clearly beginning to pay dividends with drilling extending the massive sulphide discovery zone at Mawson across close to 2km of strike. Down-hole EM continues to light up targets adjacent to the recent nickel intercepts for ongoing drill testing.

With drilling now throwing up a grab bag of nickel sulphides at Mawson East, it appears that Legend may have a serious discovery on its hands and with the latest round of massive sulphide samples currently wallowing in the lab, this may just be the calm before the storm.