Legend Mining continues to deliver wide intercepts of nickel sulphide mineralisation at its Mawson discovery in WA’s venerated Fraser Range. Assaying of the massive sulphide intercept from drill hole RKDD023 returned an imposing 24.7m at 1.35 per cent nickel and 0.77 per cent copper. The results seemingly confirm the company’s visual estimates from the logging of the drill core as exploration continues across the prospect area. 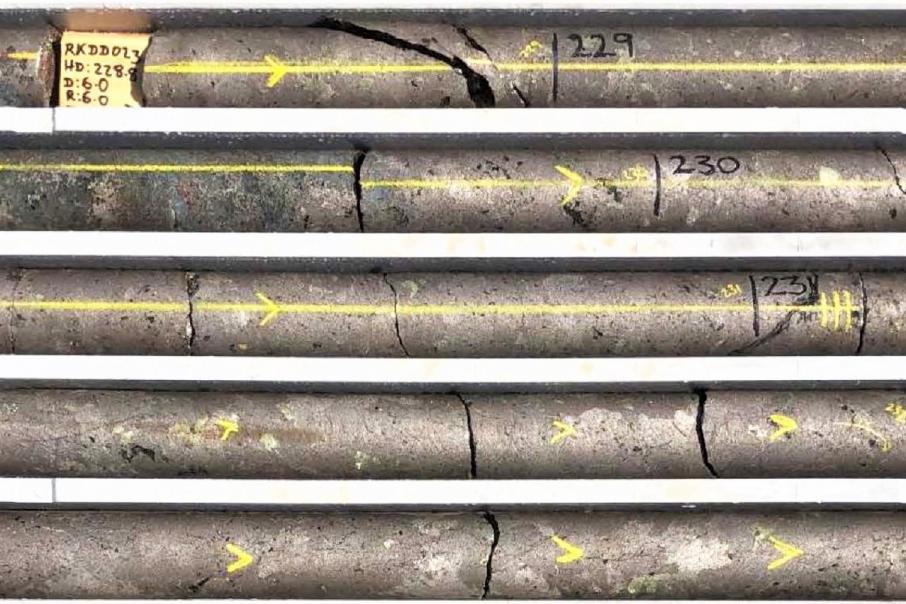 Legend Mining continues to deliver wide intercepts of nickel sulphide mineralisation at its Mawson discovery in WA’s venerated Fraser Range. Assaying of the massive sulphide intercept from drill hole RKDD023 returned an imposing 24.7m at 1.35 per cent nickel and 0.77 per cent copper. The results seemingly confirm the company’s visual estimates from the logging of the drill core as exploration continues across the prospect area.

The company’s exploration program at Mawson is continuing to follow a carefully considered and systematic approach which looks to be paying significant dividends. Legend has undertaken extensive surface geophysical and geochemical surveying across the prospect with follow up drilling and down-hole electromagnetics, or “EM”, lighting up array of subsurface nickel lodes.

Ongoing diamond drilling is beginning to plumb the depths of the nickel-rich system at Mawson West with these latest results coming from more than 220m down-hole.

“The assays from diamond hole 023 are in line with our expectations from visual observations and structural interpretations of the core. The key objective of the ongoing work at Mawson is to look for and find the primary source of this mineralisation.”

The company’s nickel discovery at Mawson forms part of its Rockford project in Western Australia, located approximately 250km east of Kalgoorlie, covering more than 3,000 square kilometres of the Fraser Range mineral province. The Fraser Range has emerged as one of the world’s newest nickel terranes following the discovery of a number of intrusive-related sulphide deposits, along more than 100km of strike, including Independence Group’s famed Nova-Bollinger nickel-copper-PGE mine.

Legend’s exploration at Mawson has uncovered a zone of significant nickel mineralisation associated with a large intrusive, mafic-ultramafic body displaying strong geological similarities to the nearby Nova discovery. The mineralised zone at Mawson covers an area more than 1,200m long and 500m wide with the geochemical footprint of the discovery remaining open to the north-east.

The Mawson discovery can be further divided into two prospect areas with exploration to date having concentrated on the Mawson West target. A systematic program of reverse circulation and diamond drilling has outlined multiple sulphide lodes across the prospect area with the ongoing drilling program now chasing these lodes to the north, where they extend to depth.

Drill hole RKDD023 intersected a broad zone of mineralisation, comprising disseminated to massive sulphides, over an interval of more than 90m, kicking off at around 216m down-hole. Logging of the drill core identified a high-grade, massive sulphide nearing the towards the top of the intercept, with subsequent assaying confirming solid grades of nickel mineralisation over a width of 24.7m.

The mineralisation intersected by RKDD023 was targeted through the company’s ongoing program of down-hole EM. Legend continues to enjoy considerable success utilising the innovative down-hole geophysical tool, to target the deeper sulphide mineralisation at Mawson West.

Currently, the Legend’s drilling program is targeting the northern extensions of the prospect and chasing a combination of known sulphide lodes and off-hole EM conductors along strike from drill holes RKDD023, RKDD025 and RKDD026.

Elsewhere at Mawson the company has also outlined deeper drill targets at Mawson East. Shallow, reverse circulation drilling has intersected anomalous nickel mineralisation below previous aircore intercepts including 41m at 0.30 per cent nickel and 24m at 0.20 per cent nickel. Logging and assaying have identified the continuations of the geology and structure from Mawson West, with ongoing exploration and modelling designed to delineate deeper sulphide targets for diamond drilling.

“The anomalous RC assays returned from the three holes in the Eastern Geochemical Anomaly have added to the geochemical and geology datasets for this area. Ultimately, the assimilation of all these datasets will lead to diamond drill targets over this eastern area of Mawson.”

With the company successfully chasing down sulphides to depth at Mawson West and exploration at Mawson East beginning to outline targets for deeper drilling, Legend’s nickel hunt across the Fraser Range is evolving fast. The company has set itself for what promises to be an interesting year ahead.