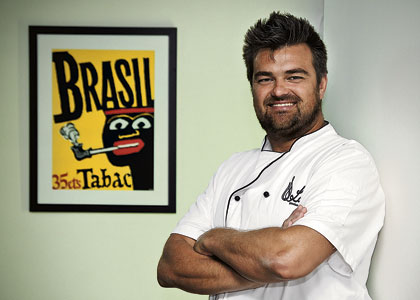 THERE’S no hiding the fact that Lapa Brazilian Restaurant in Subiaco is a haven for carnivores, with the barbecue chefs working tirelessly to serve up the 16 cuts of meat on offer.

The aromas are almost palpable.

Lapa was set up by Nordic Homes director Mark Nyland, NeuroDiscovery founder David McAuliffe and head chef Fabio Silva, who brings the experience in the kitchen thanks to his family’s long association with professional cooking and his Brazilian heritage.

So how do two career-minded lawyers-cum-building and biotech businessmen find the time to start a Brazilian restaurant?

Between Mr McAuliffe’s observations that Subiaco had a roaring restaurant trade and Mr Nyland’s knowledge of Brazilian barbeque culture (thanks to a stint living in that country) the decision was made that a Brazilian addition to Subiaco’s hospitality scene would offer something new in the market.

“We decided that Perth needed something that was reasonably priced, where you could get a good meal, and you could come away feeling like you’ve got good value for your money and somewhere that feels like a party, which is very Brazilian,” Mr McAuliffe says.

“We looked for six or eight months for a venue and we wanted something in Subiaco, because it is something new for the area and it has all the advantages of the football, lots of different pubs and lots of variety in restaurants.”

Mr Silva and the wait staff play a crucial role in the business, which has been moulded to have a celebratory environment.

The cornerstone of that is the concept of the ‘endless feast’ dining option, with wait staff carrying large cuts of meat around the restaurant on skewers and carving it at the table for diners with what Mr Silva says is almost theatrical fanfare.

“You can sit all day and graze. Typically as Australians you go out for a steak and you are done in 45 minutes. The concept here is to sit for as long as you like,” Mr McAuliffe says.

Mr Silva told Gusto the most important thing was that diners went away feeling happy and full.

With 80 per cent of diners taking the all-you-can-eat option, the fishbowl-style window into the kitchen provides diners with a glimpse of the enormous barbeque around which the kitchen was designed, and also provides the chefs with a gauge for how much meat to get on the grill.

The restaurant has been open since December 2011 and Mr McAuliffe says its reputation is growing thanks to the fact that the kitchen’s open until 10pm seven nights a week and lunch from Friday to Sunday. As the business expands, the lunch trade may extend to include Thursdays.

And while meat is the main agenda at Lapa, vegetarians aren’t ignored with numerous options on the menu, although Mr McAuliffe is a fan of the obvious attractions of the endless feast.

“We had 10 doctors here the other night and three of them were vegetarians … and they turned,” he says.

“They couldn’t withstand the smell of the meat, they had to get stuck in.”