Ladies (and laddies) live it up at La Vie 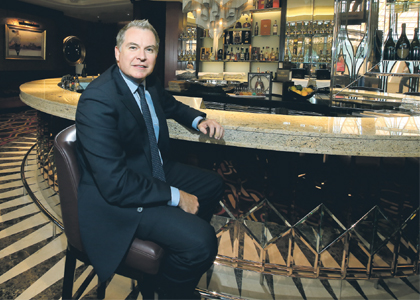 SPECIAL SERVICE: Chris Harris (above) and Sean Marco are bringing an element of sophistication and style to Crown Perth with the hotel’s new champagne lounge, La Vie. Photo: Bohdan Warchomij

JUST how many food and beverage venues does a major entertainment venue need? Well, if it’s Crown Perth we’re talking about, the number is 32.

The latest opening at the Burswood site came just last week, with the launch of the intimate La Vie champagne lounge adding another taste of diversity to the venue.

“One thing that was missing within the whole portfolio in the complex was somewhere that was premium and like an intimate cocktail bar,” Mr Harris says.

“The lobby lounge is great but we didn’t have somewhere you could go that would be very sophisticated for a pre and post-drink; it’s the jewel in the crown of all the beautiful restaurants we have now.”

La Vie sits between the renowned Rockpool restaurant and French-focused Bistro Guilluame in the hotel’s lobby.

With rich decor, soft lighting and only 45 seats, it offers an entirely different experience than the Merrywell gastro-pub (seating for 420, capacity 800) just metres away.

Mr Harris says while a major focus is on providing a sophisticated venue for hotel guests, the lounge is an option Perth residents visiting the complex have been demanding.

“We get a lot of demand from people who are attending events, so it’s just the perfect opportunity if you’re at a black tie event to just pop in here and have a glass of champagne,” he says.

Not surprisingly, the range of champagnes on offer is impressive; from a $5,700 bottle of Dom Perignon Vintage to a $14 glass of Jansz sparkling rose. The intention, Mr Harris says, was to make sure potential customers aren’t excluded while also maintaining a premium offering.

“You could come here and have some caviar and a glass of Dom Perignon; there are not a lot of venues serving that, so that sets the tone for the venue,” he says.

“That’s not to say that everything on the menu is over $30 a glass; we have a lot of people who visit and we want people to experience this type of venue within the complex.”

The hotel’s executive sous chef, Sean Marco, has been brought on board to develop a menu to accompany the array of champagne, sparkling wine and cocktails - a challenging task for the man responsible for producing 800 meals at a time from the complex’s convention centre kitchen, and with an admitted limited knowledge of champagne.

“It was quite a difficult task but ... we did a lot of research and we’ve come to something quite nice. When I wrote this menu I also had women in mind, as women usually like champagne,” Mr Marco says.

“So we’ve kept it to small tasting or grazing plates with things like goose liver, scallops and crayfish.

“This is a lot of stuff that I’ve used in the past. I’ve worked through London and France and I’ve just tapped into that; taking from the premium restaurants I’ve worked in and put it in to La Vie to match the premium offering.”

Like the drinks menu, the accompanying canape menu has a similar diversity in prices - from $280 for a serve of Italian-made Caviar to a $22 Angus beef steak hache (mini-hamburger).

Messrs Marco and Harris say the biggest challenge has been one that affects most hospitality operations - sourcing appropriately skilled staff.

However, Crown’s 2000-strong complement of food and beverage employees proved to be a significant benefit in finding the right people for the job.

“There are quite a lot of people with the knowledge, it’s just finding the suitable candidate for it and we have a lot of knowledge within the building,” Mr Harris says.

“We’ve got a pool of people and very talented young people, so a lot of the staff seen here were hand-picked from other outlets to work in La Vie.”

General manager of Crown public relation Denise Cheir says the venue is already proving popular, despite having been open less than a fortnight.

“It’s a bit like that old adage ‘build it and they will come’ - we opened the doors on Friday and this place was full,” she says.

“It’s very much a girly venue, but having said that there were boys sitting at the bar drinking champagne; so I think it’s going to be the sort of venue that the girls are going to say to the boys ‘we’re going to go’, and the boys are actually really going to enjoy it as well.”