Lack of leadership on entitlements

The Abbott government has been hurt by a failure to take a stand on politicians’ entitlements. 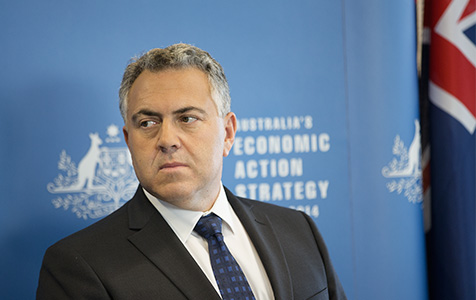 OWNS IT: What Joe Hockey was really saying, it seems, is that the age of entitlement is over … for the public.

The Abbott government has been hurt by a failure to take a stand on politicians’ entitlements.

The title of his 4,700-word, plus footnotes, address was: ‘The End of the Age of Entitlement’.

Like so many such lectures, which are more often referred to than read, I will quote some of its telling lines.

“Despite an ageing population and a higher standard of living than that enjoyed by our children, Western democracies in particular have been reluctant to wind back universal access to payments and entitlements from the state,” Mr Hockey said.

“As we have already witnessed, it is not popular to take entitlements away from millions of voters in countries with frequent elections.

“Ultimately the fiscal impact of popular programs must be brought to account no matter what the political values of the government are or how popular a spending program may be.

“The age of entitlement is over.

“The entitlements bestowed on tens of millions of people by successive governments, fuelled by short-term electoral cycles and the politics of outbidding your opponents is, in essence, undermining our ability to ensure democracy, fair representation and economic sustainability for future generations.”

Unsurprisingly, however, that path proved unpopular in the electorate.

So in their second budget, last May, they essentially beat a hasty retreat.

So why did the government engage reverse and backtrack from Mr Hockey’s April 2012 warnings?

Treasured political survival is the most obvious answer, since fearful Liberal backbenchers went to the extent of threatening to oust Mr Abbott as leader, after which Mr Hockey and Senator Cormann would have followed.

But there’s far more to this sad tale.

What needs asking is why the trio placed itself into a position where it felt unable to defend its first moves towards lightening the burden of entitlement outlays?

The answer, as this column has argued, was because its members failed to firstly confront the entitlement mentality that pervades at the parliamentary level, namely, the highly generous travel and related benefits Canberra’s political class so cherishes.

Failure to confront this contradiction meant the trio was in fact saying to voters ‘Do as we say, not as we do’, when it should have positioned itself to being able to say ‘We’re doing to others what we’ve done to ourselves’.

Soon after the September 2013 election win, Mr Abbott should have announced cutbacks in the size of currently-serving politicians’ staff, marked trimmings of their extremely generous travel benefits, and immediate abolition of free travel by long-retired politicians.

Only then could the trio have taken the argument to big-spending Bill Shorten, and complaining voters, about their initial, and it must be stressed, moderate, moves at dampening expectations of ever-expanding entitlements.

But the government had failed to prepare the groundwork, or get its own house in order, offering instead a ‘do as we say, not as we do’ edict.

Understandably this has prompted The Australian columnist Judith Sloane to write: “Let’s face it, the coalition has pretty much given up on real budget repair, preferring instead to use some extremely optimistic forecasts of economic growth to infer a balanced budget is achievable in the next little while.” (August 4 2015)

Leading from the front doesn’t mean generals must go over-the-top with troops at enemy gunfire; far from it.

In politics it means ‘do to them as you’ve done to yourself’, since that’s just, moral and boosts one’s chances of success.

The first Abbott-Hockey-Cormann budget should have recognised the fact that generous MPs’ entitlements called for cutbacks, after which time Australians were more likely to have accepted cuts for the cause, as Mr Hockey had highlighted in London.

Sadly, they failed in this regard.

That’s why the sting of the Bishop affair has been so much more painful for the Liberals.

Today, as we pass the government’s half-way mark, it’s increasingly evident the Liberals face the prospect of having only one success story to boast about during next year’s election campaign – their prompt ending of illegal entrants sailing to Australia.

Little wonder Mr Shorten has finally accepted the legitimacy of voter objection to uninvited foreigners coming willy-nilly to settle in Australia by announcing that Labor will abide by the successful boat turn back policy when he’s in power.

Sadly, the turning-back of the age of entitlement remains out of sight.