Labor’s gone past the point of no return

Federal Labor’s faction leaders need to think carefully before choosing the party’s new leader after what’s likely to be a devastating result in the September poll. 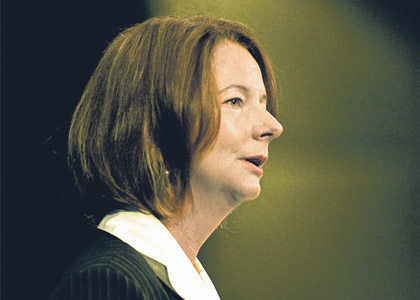 ALL DOWNHILL: Prime Minister Julia Gillard has been on a slippery slope to electoral defeat pretty much since she formed a minority government in 2010. Photo: Grant Currall

Federal Labor’s faction leaders need to think carefully before choosing the party’s new leader after what’s likely to be a devastating result in the September poll.

PARTIES and political leaders that have pulled back from the electoral brink are a rare thing in Australia.

Once they start down the slippery slope and the bad news becomes embedded, the end is invariably electoral demise.

The latest Fairfax/Nielsen poll put Labor’s national primary vote at 30 per cent (26 per cent in NSW) and showed Julia Gillard losing her status as preferred prime minister to opposition leader Tony Abbott, who is at 49 per cent to her 45 per cent.

The same poll showed Kevin Rudd at 61 per cent to Ms Gillard’s 35 per cent as preferred Labor leader.

Last year, the prime minister trounced Mr Rudd in his leadership bid by 71 to 31 votes.

That 40-vote difference means Mr Rudd needs 21 votes to regain his former job and bask in the glory, until September at least.

But his backers would be foolish to be only aiming for 21 votes because to re-emerge as a credible leader he needs an overwhelming victory, not 52-50.

That’s another way of saying anything below 71 votes would be an unconvincing resurrection.

It’s unlikely he can get them, mainly due to his dysfunctional proclivities that slowly became detested by most of his caucus colleagues.

Two years ago this column contended that a Gillard-Wayne Swan leadership team wasn’t the needed ticket to convincingly put Labor back into the saddle.

I recommended a Simon Crean and Martin Ferguson ticket, since it had a far better chance of stabilising affairs than the present leadership.

And in the process they’d have significantly minimised seat losses, after which Labor could steadily rebuild towards becoming a credible social democratic entity rather than a greenish-oriented new leftist party, which Ms Gillard and Mr Swan wish to transform it into.

Another way of viewing the collapse in support for the Gillard and Wayne Swan-led government is to consider similar previous situations.

At state level, Labor has been led by female premiers into four losing elections (and one victory).

The defeats were: Joan Kirner’s loss in Victoria in 1992; Carmen Lawrence’s loss in Western Australia in 1993; Kristina Keneally’s loss in NSW in 2011; and Queenslander Anna Bligh’s loss in 2012.

In the first three cases, the female leaders went into their campaigns after long-serving bungling male-led Labor governments had worn out voter patience and respect.

True, Ms Bligh bucked the odds in 2009 by retaining power. But her next government was noted for huge debt accumulation, boosting Queensland’s bureaucracy, and well-publicised cases of bureaucratic bungling.

Although she may appear to be the exception, Ms Bligh benefitted enormously from her conservative opponents’ ineptitude. In fact they were in such disarray they moved to recruit, in 2011, Brisbane lord mayor Campbell Newman, who wasn’t an MP at the time.

The tortuous Gillard-Swan years certainly resemble the lead-up to the four ‘lead-in-the-saddle’ contests of those failed Labor premiers.

The fact that Ms Gillard’s ousted ever-present predecessor, Mr Rudd, remains so firmly in the spotlight only serves to make her bungling appear even more unedifying.

She, in fact, drew with Tony Abbott but managed to retain power only because two one-time National MPs - Rob Oakeshott and Tony Windsor - snubbed their former political party, something they’re likely to forever regret.

Furthermore, except for Ms Keneally, Labor’s other failed women leaders, including Ms Gillard, are creatures of the feminist-oriented new-left, another drawback in ensuring good governance.

All share a dogmatically derived faith in ever-bigger government, augmented by ever-bigger spending that’s boosted along the way by big borrowings.

It’s important to recall that Ms Gillard’s pro big government and big-taxing record far outdoes the Ms Lawrence, Kirner, Keneally and Bligh quartet in this regard.

She, in the 1980s, was the convenor, not the typist, for the Socialist Forum, a fraternity of exCommunists and hard left Laborites who, over a series of conferences, devised a pathway for Australia remarkably similar to that undertaken by the Rudd-Gillard and Gillard-Swan governments.

I have a theory, or perhaps it’s better described as a suspicion or hunch, that Ms Gillard was always the real mover and shaker during Mr Rudd’s brief prime ministership.

The way this occurred was that Labor’s caucus foolishly allowed the emergence of a ‘gang of four’ comprised of Ms Gillard and Messrs Rudd, Swan and Lindsay Tanner.

And because Mr Rudd never knew precisely what he was doing and what he wanted done, Ms Gillard and the other two - both from Labor’s left - called all the shots.

Mr Rudd was essentially their front man, with that ever-smiling Kevin07 face on our TV, night in, night out.

If that’s so, and I am convinced it is, what it shows is that the other three gang members tolerated Mr Rudd’s strange proclivities as long as the opinion polls showed him leading Liberal leaders Brendan Nelson and Malcolm Turnbull.

This, of course, wasn’t difficult since Mr Nelson had to contend with a sinister Liberal group of Turnbull loyalists who undermined him at every turn, while Mr Turnbull made the suicidal decision to remould the Robert Menzies-founded Liberal Party into a subsidiary of the ALP, but without formal union links.

So when Tony Abbott arrived to finally put the Liberals back on a straighter, narrower and more sensible path on issues like a tax on CO2, advocating successful border protection, and scrapping huge outlays on silly bottomless pit programs, Mr Rudd’s fantasies were seen for what they were.

And that became the signal for the three in the gang of four to oust their naive front man.

Understandably Mr Rudd, who has had time to mull over all this, hasn’t forgiven them for their stab in the back because he, after all, always loyally did precisely what they’d told him to say and do.

It’s therefore difficult not to view the scheduled September election, with Ms Gillard’s dismal record, as shaping up to experience the same fate as that of the four failed Labor premiers mentioned above.

Clearly the best way out of this predicament remains steering the sad ship Labor back towards its social democratic roots, away from the Greens-inspired new-leftism of the Gillard-Swan duo.

Yes, that means Messrs Crean and Ferguson who, although unlikely to avoid the coming electoral trouncing, should be handed the reins.

They’d at least minimise collateral damage so their party can emerge as a credible alternative next decade.

Persevering with the Gillard-Swan greenish-leftist path spells disaster not only in September, but far beyond.