Labor labours after bastardry to Bomber

Labor would have avoided a lot of political turmoil if it had, not once, but twice rejected Kim Beazley. 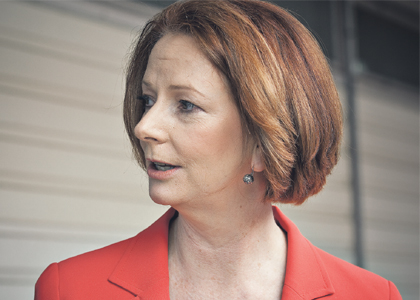 ANSWERS: Julia Gillard is under pressure over her time as the partner and lawyer of former AWU boss Bruce Wilson. Photo: Grant Currall

Labor would have avoided a lot of political turmoil if it had, not once, but twice rejected Kim Beazley.

IT’S looking as though Labor may be on the way to scoring an unwelcome leadership hat trick.

Political wicket number one fell when its number crunchers foolishly elevated the inexperienced and erratic Mark Latham to lead Labor in 2003 -a fatal, if narrowly won, move.

Mr Latham became leader by one vote against the experienced Kim Beazley, after which he went on to lose the 2004 election.

Not being a stayer, he promptly spat the dummy and left parliament.

Labor then returned to Mr Beazley who, a year out from the 2007 election, had positioned the party to be ahead of the slowly fading Howard government.

So what did Labor’s number crunchers - most especially those collectively known as the New South Wales right - do when they realised they were on the road to winning election 2007?

They stabbed Bomber Beazley in the back.

What makes their deed even more treacherous is that Mr Beazley had aligned himself with the NSW-dominated right faction throughout his entire political career.

So much for gratitude in politics; so much for valuing experience.

To make their deed even less honorable they proceeded to opt for another erratic and inexperienced individual, one now from Brisbane - Kevin Rudd.

That was destined to become wicket number two.

Not only was there no need to remove the experienced Mr Beazley, but the decision proved to be incredibly crass since most in caucus knew of Mr Rudd’s managerial style, which had first become evident when he was a senior boffin for Wayne Goss’s Queensland Labor government.

It was in those years that Mr Rudd earned his widely used nickname, Dr Death.

So, in just three years - December 2003, when Mr Latham became leader, and December 2006, when Mr Rudd ascended to that post - Labor twice opted for unsuitable individuals.

The Rudd Dr Death syndrome became so debilitating that caucus finally ousted him after an overwhelming number of MPs, including several senior ministers, refused to have anything to do with him, let alone sit in his cabinet.

By early 2009, governance under Mr Rudd had simply ground to a halt.

So, when viewing the Latham-Rudd years, including the latter’s time as PM (December 2007 to June 2010), Labor’s recent preference for inexperience over experience mustn’t be forgotten.

All these posts were held during Labor’s best ever post-war governance and reform years - the Hawke-Keating era.

Yet myopic caucus disregarded the idea of building upon that era of gains.

Instead, its anti-Beazley push highlighted the fact that he’d lost two elections - 1998 and 2001 - to John Howard.

Although it’s true that he had failed to oust the Howard-led coalition at both contests, this must be viewed more closely.

Labor was defeated in 1996 in what was a landslide, largely because its leader, Paul Keating, increasingly showed he harboured quite erratic proclivities, something that prompted increasing numbers of voters, when comparing him to the markedly more measured and calmer Mr Howard, to view him as unacceptable.

Mr Beazley was, in fact, Mr Howard’s match.Why do I say this?

Firstly, Mr Beazley’s temperament was similar to that of Mr Howard’s, not that of Messers Keating, Latham, or Rudd.

But more importantly, at the 1998 election, Mr Beazley, although not gaining the needed number of seats to form government, had attracted 51.5 percent of the nationwide two-party preferred votes.

He was, to put it bluntly, unfortunate that this clear-cut majority hadn’t translated into winning the required number of seats.

And the next contest, his second clash against Mr Howard - election November 2001 - fell two months after the 9-11 attacks by Osama bin-Laden’s Islamist disciples on New York’s Trade Center towers and the Pentagon.

Not surprisingly, and understandably, large numbers of Australians responded to these events in the same way British electors had at their June 1983 election, which came soon after the April-June 1982 Falklands War that Margaret Thatcher had so doggedly waged against the odds.

Which brings us to Julia Gillard, a beneficiary of and partner in the 2006 Rudd coup who, as leader of Labor’s left faction, allied herself with him.

Had she not done so Australia would never have had to endure the costly and wasteful Rudd-Gillard years.

There would instead have been a more balanced Beazley era after 2007, possibly right up until now.

But that wasn’t to be.

Some even knew she’d been acting as Mr Wilson’s lawyer, when, in her words, she, at 30 years, was “young and naive”.

Others, like her one-time attorney-general, Robert McClelland, were fully conversant with the moves in the early 1990s to convene a Royal Commission to investigate Mr Wilson’s activities as an AWU powerbroker, and that Ms Gillard suddenly ended her legal career with union-oriented law firm, Slater & Gordon.

Her activities involving the AWU and Mr Wilson were even the subject of critical remarks in Victoria’s parliament.

Notwithstanding all this she was assisted in becoming chief of staff for Victorian opposition leader John Brumby, and soon after gained Labor pre-selection for the federal seat of Lalor.

Unfortunately for Ms Gillard, Mr Wilson’s shenanigans over the years she was so close to him have sparked interest among several lawyers, journalists, and now even Liberal deputy leader Julie Bishop, herself formerly a lawyer.

Ms Gillard’s legal work for Mr Wilson had inevitably left a paper trail - registration of legal entities, allegations of monies used to part-fund acquisition of a house in Fitzroy, and moves from within the AWU to bring on a Royal Commission.

Efforts by several journalists and the opposition for a clear-cut statement by Ms Gillard to parliament clarifying her role in Mr Wilson’s fundraising and outlays of these moneys have so far come to naught.

Also now a focus of inquiry about Ms Gillard’s Wilson years is the fact that two sets of documents at different venues have vanished.

If these files should ever be located, Ms Gillard could well find herself finally having to make a more definitive statement to parliament about her role in Mr Wilson’s activities.

And if her explanation is found wanting, she could become that crucial third wicket that gives Labor its unwelcomed hat trick.

If that happens I’d expect several Labor number crunchers, especially from NSW, to look back with regret for not having opted in 2003, 2006 and 2010 for experience.