Kingwest Resources’ Menzies project has gold hits coming in thick and fast, with the latest round of results identifying two previously unrecognised, high-grade lodes in both the hangingwall and the footwall of the Princess May historical deposit at the company's Yunndaga prospect. Above the deposit, one drill hole hit 1.3m @ 19.82g/t Au from 92.0m and below it, 2.28m @ 17.87g/t Au from 99.65m. 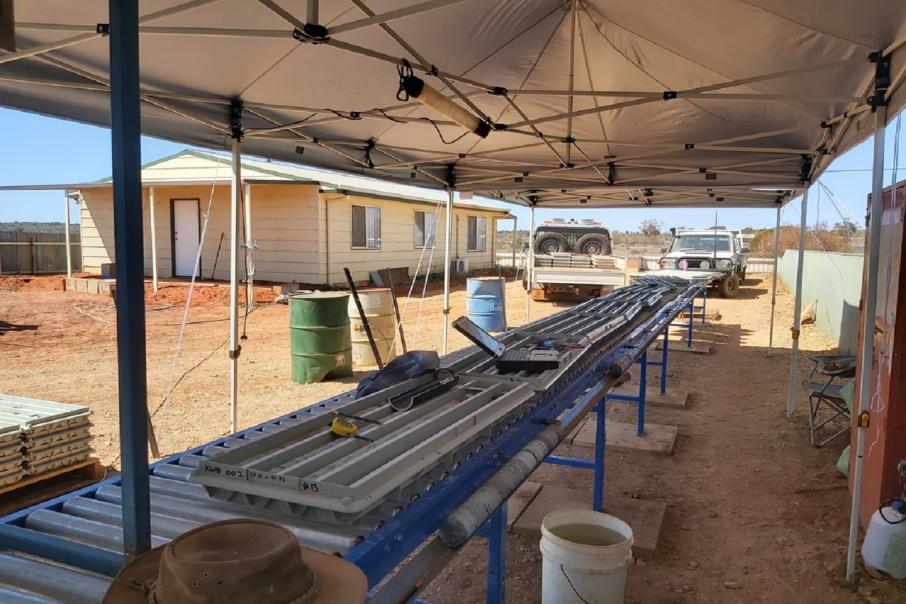 A Geologist's office at Kingwest’s Menzies project, which has gold hits coming in from all directions with the latest round of assays identifying some shiny new lodes.

Kingwest Resources’ Menzies project has gold hits coming in thick and fast with the latest round of results identifying two previously unrecognised high-grade lodes in both the hangingwall and the footwall of the Princess May historical deposit at the company's Yunndaga prospect. Kingwest drilled an additional four diamond holes, with the decision paying off in the form of some sensational grades.

Underneath the historical Princes May stope, the drilling intercepted 2.28m grading 17.87g/t gold that also includes over a meter at more than one ounce per tonne gold from 99.65m downhole.

Princess May was historically mined to 600 vertical meters below surface and produced 271,000 ounces of gold grading a smashing 16g/t.

Interestingly, before 2019, only 20 holes were drilled into Kingwest’s Menzies project that were greater than 200m deep over the entire 10 kilometres strike.

As part of a thorough data review, Kingwest Geologists picked up a previously unreported, 700m deep, vertical diamond hole at Yunndaga, which intersected 2.4m grading 14.7g/t gold from 562m downhole. This intersection is the deepest known to date and not surprisingly has tickled the interest of Kingwest who is planning to follow it up in the new year.

With the company intersecting mineralisation above and below, or in the hangingwall and footwall of these historical deposits, the potential exists to add near mine resources very quickly.

The global resource over the Menzies gold project currently sits at 2.42 million tonnes grading 2.2g/t for 171,310 ounces of gold from the Yunndaga, Pericles, Bellenger and Warrior deposits.

Kingwest’s project area is littered with over 5,000 historical workings, with the remnants of these excavations providing visible targets at surface for Geologists to study.

Innovations in applied geological science and drilling technologies are showing that these long-forgotten rich gold lodes continue at depth and are often found to repeat themselves.

These high-grade lodes might appear narrow at first – however, the historical production at Menzies was around 800,000 ounces at a solid 19g/t gold, including a portion of underground gold produced at an impressive grade of 22.5g/t.

Kingwest says that the drilling to date has well met its expectations and the rocks are directly comparable to other high-grade, narrow gold mines such as the nearby Kundana with its impressive resource of 1.4 million ounces grading 4.8g/t gold and an average width of just 0.65m.

Grade is certainly King at Menzies and a considerable success with the drill bit here would not come as too much of a surprise given the 5000 old-timer workings that are scattered around the project area.

Those guys did not tend to brave the heat - particularly 5000 times - if they were not getting a payday.