Perth writer Hal Colebatch has released a biography of one of Australian politics’ great change agents. 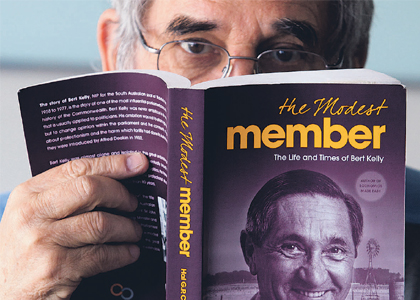 Perth writer Hal Colebatch has released a biography of one of Australian politics’ great change agents.

MOST of my friends and acquaintances regard virtually all politicians as party hacks, dullards and seat warmers, out to maximise their parliamentary pensions.

I rarely object whenever I hear this, since I’m sympathetic to their view. I certainly don’t believe Australia’s 1,000 or so state, territory, and national MPs are serving the country well.

Without dwelling on this, just cast your mind back to how Labor MPs sat on their hands for years allowing scandalous wastage - pink batts, overpriced school halls, and foreign boat entries - during the Rudd-Gillard years.

Intelligence, common sense and courage too often go missing in action in politics, with the follow-the-leader mentality prevailing.

Thankfully, there are exceptions.

One who definitely qualifies is the late Charles Robert ‘Bert’ Kelly (1912-97), whose biography has just been released, The Modest Member: The Life and Times of Bert Kelly.*

Its author is Perth writer Hal Colebatch, a friend of mine since university days.

Bert’s father, William (known as Stan), sat on the Commonwealth tariff board, where he steadily became an opponent of high duties on imported goods imposed by federal governments.

All up, Kelly wrote 898 columns for the AFR, plus ‘The Kelly Conquests’ for Business Review Weekly, ‘Micawber’ for Queensland Country Life, and ‘Dry Corner’ for South Australia’s Rural Times.

In between, he ran the family farm and was a regular speechmaker.

His columns canvassed many public issues but he’ll be best remembered as a campaigner against Australia’s self-imposed high production cost structure nurtured by an all-powerful tariff board and dutifully imposed by thoughtless seat-warming politicians.

Colebatch shows that Kelly wasn’t an extremist free-trader but ‘an advocate of low tariffs’, provided they nurtured efficient industries.

In one of his last public addresses, Kelly expressed his personal gratitude to several long-time leading but now largely forgotten politics and business writers, “who were interested in economic policy in those days, not just personalities as they are now”.

He named them as Alan Wood, Max Walsh, Ken Davidson, Tony Thomas, Robert Haupt, and Paddy McGuinness, and said they were gratified to find an MP who shared their opinions.

Like his columns, their reporting served Australians well; so well that when the Hawke Labor government emerged in 1983, public opinion and many in parliament collectively realised it was time to transform Australia’s economy by shedding high protectionism.

Here, it must be added, Kelly’s chats with Canberra colleagues ensured several conservative MPs, including Western Australians John Hyde, Ross McLean and Peter Shack, and future Liberal leader John Howard, backed the Hawke moves. Together they were dubbed ‘Kelly’s chickens’ or the ‘dries’

The reason is well explained by Colebatch.

He more than anyone ensured our economy would be less competitive because of the ever-rising cost of inputs. Strangely, this included farming, the Country Party’s electoral power base, and mining. Together these were the country’s most productive industries.

“McEwen was a giant of Australian politics,” Colebatch writes.

“He had been in the House of Representatives for more than two decades when Kelly arrived.

“A minister in the government of Joseph Lyons, and a pall-bearer at his funeral in April 1939, in 1941 he became deputy leader of the Country Party after failing by single vote to win the leadership.

“He had to wait until early 1958 before taking that next step, when he also became deputy prime minister.”

Coincidentally, 1958 was when Kelly reached Canberra.

The scene was thus set from day one for a clash between ardent protectionist McEwen and Kelly.

McEwen’s influence over tariff policy dates back to 1949 when he became commerce and agriculture minister, but was boosted significantly in 1956 when his ministry was split and he took over trade.

“[T]he essence of what became known as McEwenism would have been a form of corporatism and a significant erosion of Australian democracy,” Colebatch writes.

“Kelly, by contrast, was an unambitious politician content to make his living principally as a farmer, that demanding combination of labourer, agricultural scientist, and businessman, who really had been propelled into politics by a sense of public duty.”

‘McEwenism’ assisted the Country Party. Big industries that depended on high cost protectionism, like the motor vehicle and industrial chemical sectors, bankrolled it.

Moreover, protectionism had always been an easy sell to voters who’d been convinced it created jobs, rather than destroyed them; this point was made in 1930 by historian Keith Hancock in his book titled, Australia.

“Protection has been more than a policy: it has become a faith and a dogma. Its critics, during the second decade of the 20th century have dwindled to a despised and detested sect, suspect of nursing an antinational heresy,” he wrote.

History, tradition, and the numbers were thus on McEwen’s side. Little wonder Liberal Party founder Robert Menzies wouldn’t tackle him on this issue.

“It is not surprising that the headquarters of the Country Party in Canberra were established with the aid of a large donation from the manufacturers’ lobby.”

“Bert was opposed to protectionism ... because it created a situation in which governments, in the person of ministers or officials, granted arbitrary and capricious favours to some, who were thus greatly enriched, at the expense of others, who were at best impoverished and at worst, ruined,” Evans said.

By dint of sheer doggedness Kelly eventually won over the likes of Gough Whitlam and John Howard.

“No private member has had as much influence in changing a major policy of the major parties,” Whitlam said.

In a parliamentary eulogy to Kelly, Howard said: “No person in the postwar parliamentary period or earlier ... championed the cause of lower tariffs and free trade ahead of Bert Kelly. He is one of those rare politicians who actually manages to see the importance of consistent long-term policies over immediate party advantage.”