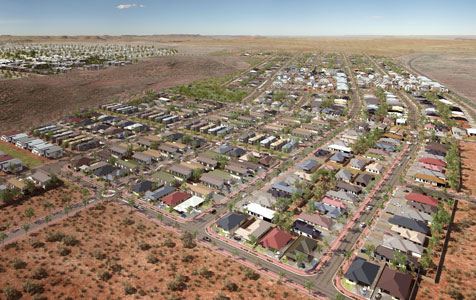 THE state’s buoyant resources sector has proved a mixed blessing for Karratha.

Its proximity to major resource projects like the North West Shelf and Rio Tinto’s iron ore operations has brought hundreds of workers to the town, sparking big increases in property prices and a runaway rental market.

But as home prices increased, affordability took a dive and the chronic shortage of houses started to drag on the expansion plans of businesses in the region.

With funding through the Royalties for Regions program, the state government implemented its Pilbara Cities initiative, a long-term strategy to address infrastructure coordination as well as land availability and development in the Pilbara’s rapidly expanding towns.

LandCorp says this is clear evidence of “a normalising market” along with the variety of house-and-land packages on the market.

LandCorp chief executive Ross Holt said the agency’s land releases in Karratha, including the most recent launch of 100 lots at Madigan Estate, had given people more choice.

LandCorp is also working with Mirvac to redevelop Karratha’s city centre and build a 150-room, four-star hotel, two office buildings, retail space and apartments as well as the Mulataga coastal residential community, which will ultimately support more than 2,500 homes.

Mirvac expects to secure development approval for Mulataga within weeks and already has the Shire of Roebourne’s sign-off on its city centre plans.

It’s estimated the end value of these two projects is close to $1 billion, but the true test, according to Mirvac development director Kim Lawrance, will be when they “hit the ground” with their marketing campaigns.

Any cooling in Karratha’s rental market won’t slow them down.

“The market is down a bit on where it was but it’s part of the government’s strategy of allowing market normalisation,” Mr Lawrance said.

“One of the things we saw over the past few years, driven by the perception of a resource boom, was a lot of speculation around property prices, where people perceived an arbitrage in the market.

“What the government is trying to do is remove that level of speculation and increase affordability.”

Otan claims research it commissioned suggested Karratha’s population could grow from its current level of about 16,500 people to more than 20,000 residents by 2017.

And he believed any recent falls in rents were more likely to be a result of the softening in the resource sector in the past three months.

“From the aspect of the availability of housing, the lack of available stock is driving up the sales prices and rentals,” Mr Davison said.

“It’s probably dropped off a little bit in the recent months following the mining guys pulling back a bit but it’s still significant and it’s not affordable, which is a big problem.”

Once completed, the Jingarri subdivision will support up to 200 green-titled lots and about 150 group dwellings over five sites.

Listed developer Finbar expects to finish construction of the second stage of its Karratha apartment project Pelago by the end of the year.

The marketing campaign for the $225 million project has targeted investors, including east coast buyers, with the promise of yields of up to 10.89 per cent for one-bedroom apartments.

“Trends have shown that Karratha can fluctuate in price, however prospective investors should understand that the core mining industry will continue to flourish and with population growth high returns will continue to attract investors,” Mr Chan said.

“There is still a considerable shortage in accommodation and any new land releases will simply fuel the leasing market.

“There will be price differences between new and old dwellings, however with the strong growth in the resources sector and population growth I do not see a normalised market any time soon.”

Roebourne shire president Fiona White-Hartig was bullish about the opportunities for both developers and prospective investors.

“You only have to read the news today and Woodside are considering bringing the Browse project to Karratha,” Ms White-Hartig said.

“We have people talking to us all the time about major developments and there are some significant ones on the horizon … one or two projects could mean we have no housing stock on the market, it goes that quickly.”