Kairos Minerals is off and racing with a drill rig now churning away on a 1,500m RC program at the Iron Stirrup prospect, part of its flagship Pilbara Mt York gold project in WA. Iron Stirrup has a current resource of 1.07 million tonnes grading 1.94 grams per tonne for 67,000 ounces of gold and the drilling will target high grade shoots within the deposit. 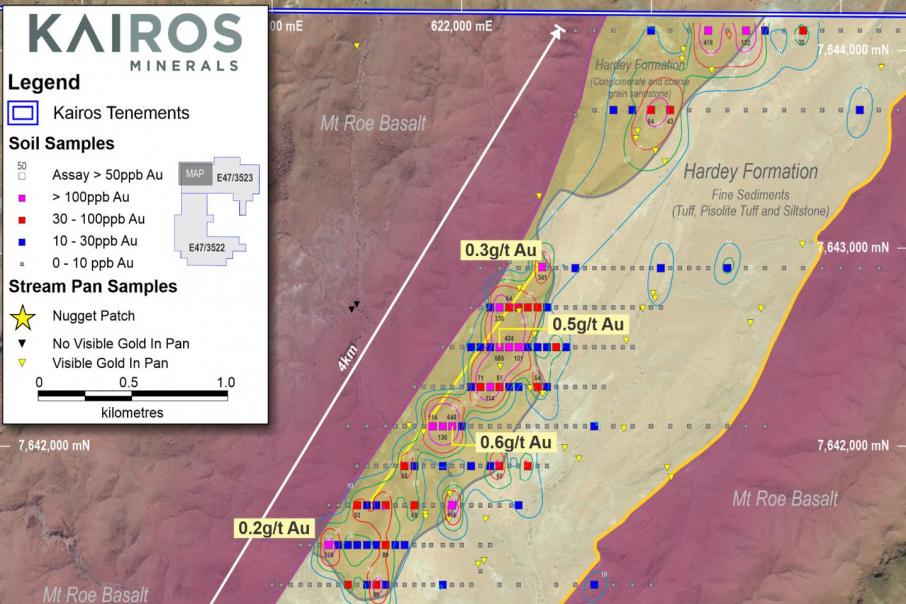 Kairos Minerals is off and racing with a drill rig now churning away at the Iron Stirrup prospect, part of Kairos’ flagship, Pilbara, Mt York gold project in WA. Approximately 1,500 RC metres are set to test the higher-grade zones at Iron Stirrup, which has a current resource of 1.07 million tonnes grading 1.94 grams per tonne for 67,000 ounces of gold. Kairos has joined a wave of explorers that are trawling over historic gold ground and it now has its ears pinned back in the race to be the next to market in this new era of extraordinarily high gold prices.

The prospect boasts some interesting historical drilling results below the existing open pit including 30m at 3g/t gold and 25m at 3.3g/t gold.

Mineralisation is currently over a length of 300m and remains open along strike and at depth.

With surging gold prices, Kairos is now dusting off the existing mineral resources with the aim of reviewing the mining metrics of its 643,000 ounces at the Mt York project.

A recent placement secured a tidy $1.35M from sophisticated investors and Kairos is seeking to raise an additional $650K in a share placement plan to underpin exploration activities at its flagship Western Australian project.

Kairos’ Executive Chairman, Terry Topping, said: “After what has been a long and successful field season at the Croydon Project, we are really pleased to have an RC drill rig back in the field and operating at the 643,000oz Mt York Project…”

“The two-week program will target extensions of the mineralisation at depth and along strike below the historic open pit, with results expected early next year.”

“[This] drilling program is expected to form part of a much larger exploration push at Mt York next year. In addition to reviewing the mining potential at Mt York, we plan to return to the Croydon Project next year to test the large gold-in-soils anomaly identified recently and advance other recently identified opportunities at the Kangan Project and elsewhere”.

With the success of other juniors in awakening old gold projects by blowing off the cobwebs and drilling deep – at face value at least, the strategy for Kairos looks good - now for some results.