Kairos Minerals has found another 135 gold nuggets weighing over 11 ounces at its Croydon Project in the Pilbara region of WA, barely two months after its initial discovery of 256 nuggets. Most of the nuggets were found about 2.5km south of, and within the same stratigraphic corridor as the first patch while the third patch of nuggets marks the first time the company has recovered gold from the lower Hardey Formation. 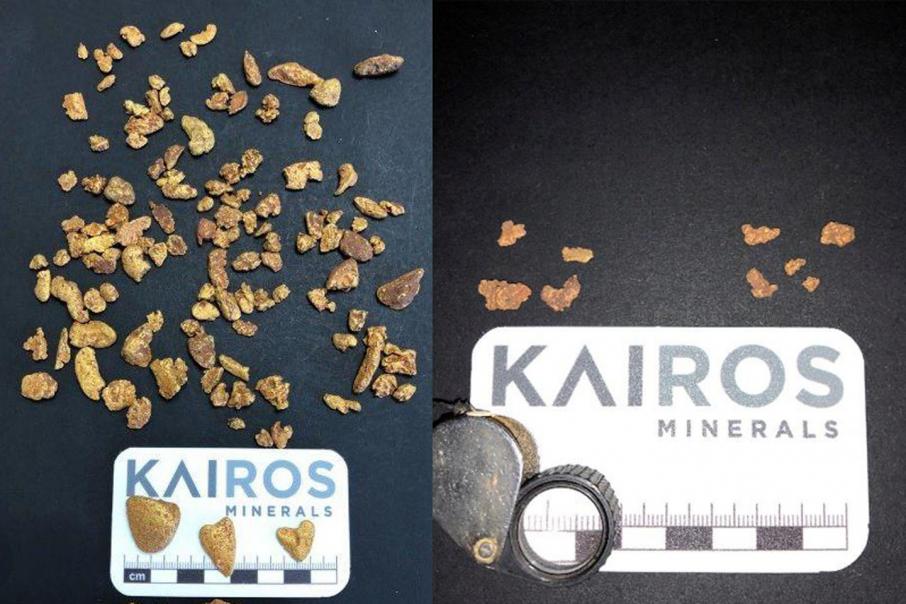 ASX listed Kairos Minerals continues to build the case for conglomerate gold at its Croydon Project in the Pilbara region of WA, with the discovery of a further 135 gold nuggets weighing over 11 ounces in two locations.

These finds follow hot on the heels of the company’s initial discovery in September of a bonanza patch of 256 nuggets weighing over 8 ounces, mere weeks into its 2018 conglomerate exploration program.

Most of the new nuggets – 126 in total, weighing 10.8 ounces - were found about 2.5km south of, and within the same stratigraphic corridor as the first patch.

These nuggets exhibit the flattened “watermelon seed” shapes with pitted textures and Kairos believes the discovery is analogous to the Purdy’s Reward and Comet Well discoveries, which are being explored by Novo Resources and Artemis Resources.

Additional sampling, metal detecting and geological mapping is currently in progress to provide a better geochemical and geological picture in this area.

The remaining nuggets were found in a third patch located about 2km northwest of the original discovery.

Significantly, this marks the first time that the company has recovered gold from the lower Hardey Formation, opening up a potential new avenue for exploration at Croydon.

Gold found within the Hardey Formation elsewhere in the Pilbara, such as at Novo’s Beatons Creek project, is typically fine grained, evenly distributed, and measurable using standard drilling techniques.

Adding further interest, Patch 3 was found upstream of a sample that yielded just three “colours”, or micro nuggets, which Kairos said was a demonstration that any indication of gold in its reconnaissance sampling would be worth following up.

In this north-western part of the project, the company has defined a strong gold anomalism, including visible gold in pan samples, over a strike length of at least 6 kilometres now.

Follow up exploration is currently underway to further evaluate the significance of the Patch 3 discovery.

In October, the company extended the strike length of the gold bearing conglomerate to over 4km after exploration identified visible gold in stream sediment pan samples with gold colours recovered both north and south of the original nugget patch.

Kairos Executive Chairman Terry Topping said: “The 2018 exploration field season has been a huge breakthrough for our ongoing exploration of the Croydon Project, highlighting the scale of the opportunity for Kairos. We believe that the recently announced discoveries could also have important implications for broader conglomerate gold exploration within the Pilbara region.”

“We have commenced the approvals process for follow-up selected trenching and RC/diamond drilling to further evaluate the prospective conglomerate horizons. Given the imminent onset of the northern cyclone season, we expect to commence this work at the start of the 2019 exploration field season.”

Kairos is clearly putting some serious meat on the bones at Croyden and the upcoming 2019 exploration field season should give a clearer picture of the scalability of the resource.