Kairos Minerals has kicked its exploration efforts into high gear with a drilling blitz across two projects in WA. A 3,000-metre campaign at Roe Hills targeting gold and nickel in the Goldfields has already begun, with a 20,000-metre program looking to grow the gold resources at Mt York in the Pilbara to follow. 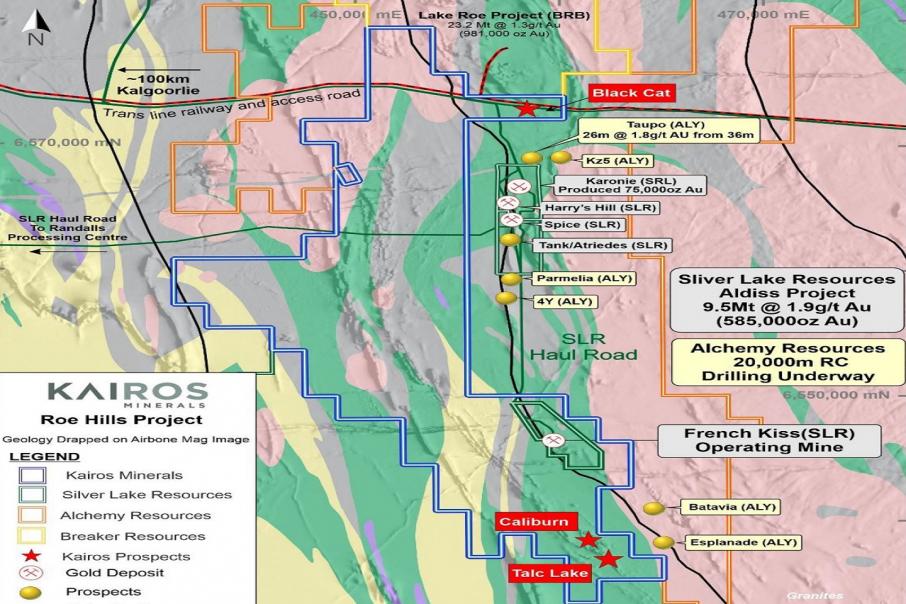 Kairos Minerals has kicked its exploration efforts into high gear with a drilling blitz across two projects in Western Australia. A 3,000-metre campaign at Roe Hills targeting gold and nickel in the Goldfields has already begun, with a 20,000m program looking to grow the gold resources at Mt York in the Pilbara to follow.

The major drilling campaigns mark the commencement of the 2021 field season for Kairos following the end of the wet season in the Pilbara.

At Roe Hills, located some 120km east of Kalgoorlie, follow-up drilling has already started at the Caliburn prospect located in the southern sections of the 324 square kilometre tenure.

Kairos believes Caliburn may represent a broad zone of gold mineralisation up to 50m thick, 150m wide and over 160m length which remains open in all directions. The prospect lies just 5km from the French Kiss open-cut mine operated by ASX-listed Silver Lake Resources where a resource of some 1.2 million tonnes going 1.9 g/t gold has been defined.

The drilling campaign at Roe Hills will next shift to the nearby Talc Lake prospect, before heading off to the Black Cat prospect in the northern part of the landholdings.

Talc Lake will be treated to some 1,000m of drilling which is planned to follow up previous significant nickel sulphide hits and to test off-hole conductors and an ultramafic unit defined by Kairos through geophysical surveying.

At Black Cat, a recently generated gold-in-soil anomaly with an 1,800m strike length will be tested. The first-pass reconnaissance drilling will total some 800m.

Intriguingly, the company’s Roe Hills tenure adjoins the emerging Lake Roe gold discovery owned by ASX-listed Breaker Resources where some 981,000 ounces of gold have been delineated.

Further north in the Pilbara, Kairos has already commenced field work at Mt York following the end of the wet season with a major new soil sampling and mapping program underway.

The 20,000m campaign at Mt York will follow the drilling at Roe Hills with the company looking to grow the existing resource base and to upgrade the unclassified, inferred and indicated resources into categories of higher confidence.

Since acquiring the project in 2016 Kairos has gone on to define a resource of 20.93 million tonnes going 1.3 g/t of gold for an impressive 873,000 ounces of the precious yellow metal.

The hiistorical Lynas Find gold project that produced over 125,000 ounces of gold in the 1990s lies within the 1,547 square kilometre project tenure.

Exploration drilling is also on the cards for Mt York with several holes planned to test previously generated targets outside of the known resource base.

The 2021 field season is well and truly underway for Kairos in WA. With two projects in mineral-rich regions set to be peppered with drilling, this up-and-coming Perth based explorer has positioned itself to deliver a pipeline of news flow throughout the rest of the year.