Kairos Minerals has launched an aircore drilling program at its Kangan project 70km south of Port Hedland in WA’s Pilbara region as it looks to uncover an intrusion-hosted gold deposit similar to the exciting 6.8-million-ounce Hemi gold discovery only 20km to the north-west. The company’s latest round of drilling will be aimed at testing a “sizeable” gold anomaly that straddles major regional structures. 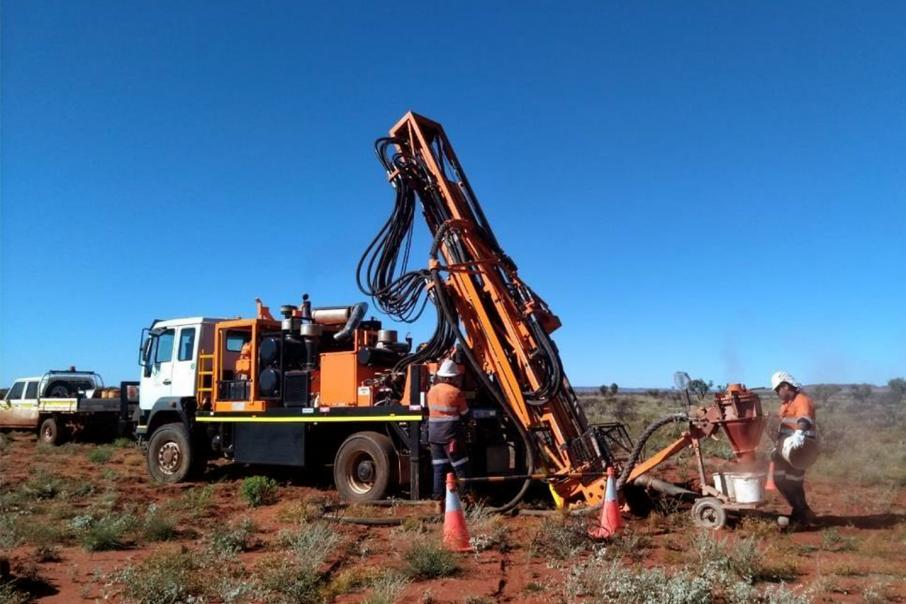 ASX-listed explorer Kairos Minerals has launched an aircore drilling program at its Kangan project about 70km south of Port Hedland in WA’s Pilbara region as it looks to uncover an intrusion-hosted gold deposit similar to the exciting 6.8-million-ounce Hemi gold discovery only 20km to the north-west. The Perth-based company’s latest round of drilling, which has a planned aggregate coverage of about 5,000m, will be aimed at testing a “sizeable” gold anomaly that straddles major regional structures.

Kairos says the Target 1 prospect is perched adjacent to a significant north-south structural zone coincident with a 3km-long geochemical anomaly.

The interpreted north-south structure runs along the eastern margin of the gold-in-soils anomaly and, according to the company, is similar to large regional structures adjacent to the Hemi deposit.

Kairos points out the target area overlies a 1km-wide zone of elevated auriferous pathfinder elements associated with granitic intrusions and can be traced for more than 15km to the south-east.

Kairos Minerals Executive Chairman Terry Topping said: “We are pleased to be underway at one of our regional target areas where there has been no previous exploration for gold. This is the first of numerous targets outlined last year to be tested. This work is part of an extensive regional exploration program targeting Hemi-style gold deposits utilising ultrafine soil sampling as part of the CSIRO soil research initiative.”

Owner of the Hemi discovery, De Grey Mining, last week released a stonking maiden inferred and indicated resource estimate for Hemi of 192.4 million tonnes at an average grade of 1.1 grams per tonne for 6.8 million ounces of contained gold, based on a 0.3 g/t cut-off.

The resource numbers for Hemi, which consists of a cluster of six individual gold deposits called Brolga, Aquila, Crow, Falcon, Diucon and Eagle, were posted after De Grey’s reverse circulation and diamond drilling campaigns totalling a mammoth 203,228m. The company reportedly has 12 drill rigs still banging away at Hemi and the greater Mallina project.

Gold mineralisation at Hemi occurs in a series of intermediate intrusions associated with sulphide – pyrite and arsenopyrite – stringers and disseminations within brecciated and altered quartz diorites that intrude into the surrounding Archaean-aged Mallina Basin sediments.

De Grey says the Hemi-style of mineralisation is newly revealed in the Pilbara region and now modelled on a scale not previously seen in the Mallina Basin.

The company has two rigs drilling up a storm at the project’s triumvirate of keystone deposits – Mt York, Iron Stirrup and Old Faithful.

Between them the deposits host an inferred and indicated mineral resource of 20.9 million tonnes grading an average 1.3 g/t for 873,500 ounces of contained gold to a vertical depth of 195m.

Kairos says the Mt York drilling is designed to extend the areas of known gold mineralisation both along strike and down dip, while infill drilling is intended to increase its confidence in the resources.

Earlier this month Kairos put forward an “exploration target” of 4.4Mt-to-7.4Mt at an average grade of 1.5 g/t-to-1.8 g/t for Mt York and Iron Stirrup and the Zakanaka historical open pits.

The exploration target is in addition to the existing mineral resource at the Mt York project.