Fresh from successfully raising more than $4 million from a rights issue and share placement, ASX-listed gold explorer, Kairos Minerals, is ready to fire up the drill bit as part of a multi-pronged exploration blitz across its flagship Pilbara gold project south of Port Hedland. Interestingly, the project is in the neighbourhood of De Grey Mining’s exciting Hemi discovery. 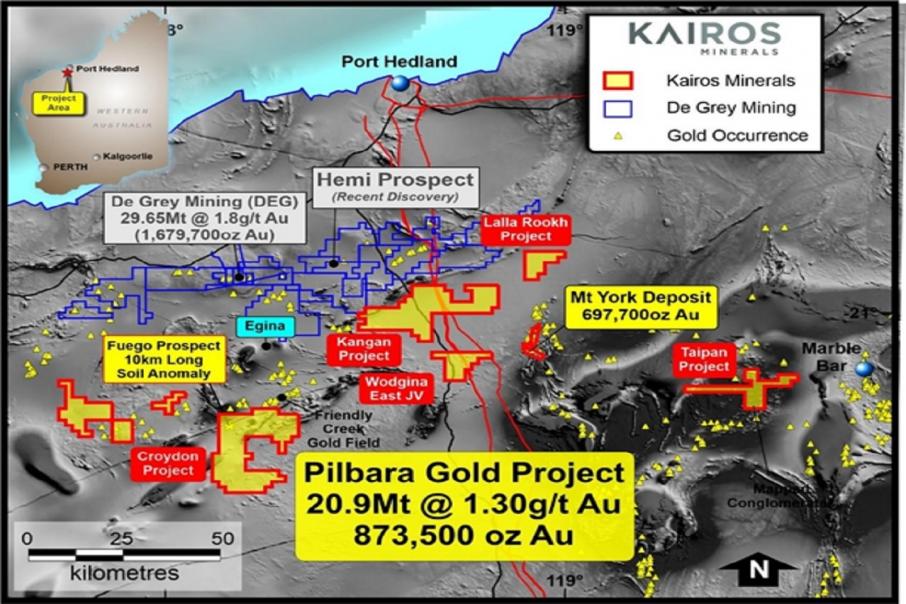 Fresh from successfully raising more than $4 million from a rights issue and share placement, ASX-listed gold explorer, Kairos Minerals, is ready to fire up the drill bit as part of a multi-pronged exploration blitz across its flagship Pilbara gold project in WA.

The Perth-based company has stepped up its search for gold targets at Pilbara recently with a regional soil geochemical program, mapping, airborne magnetic and radiometric surveys, ground-based geophysical survey and follow-up RC drilling either underway or in the pipeline at various prospects within its big package of tenements south of Port Hedland.

Its Pilbara project is in the same neighbourhood as De Grey Mining’s exciting Hemi discovery that catapulted De Grey into almost a billion-dollar company.

Kairos’s 5,000m RC program that is slated to kick off mid-next month will initially test for an extension of mineralisation at the Mt York deposit, where only one historical hole has been drilled.

The Pilbara gold project takes in the historical Lynas Find gold mine, which produced about 125,000 ounces of gold between 1994 and 1998.

Kairos Executive Chairman, Terry Topping said: “With the recent closure of the rights issue marking the completion of our $4.2 million capital raising, the company is fully funded for upcoming exploration activities across our flagship Pilbara gold project.”

“The 2020 campaign is about to move up a gear with the imminent commencement of a 5,000m RC program across the Mt York and Croydon projects. Drilling will initially target extensions of the Mt York, Iron Stirrup and Old Faithful deposits at Mt York before moving on to test the exciting greenfields targets at Fuego and the Tierra prospects within the Croydon project.”

The company says the Mt York resource provides a solid platform to base future open-pit mining studies on as it looks to extract value from the Pilbara gold project at a time of record-high gold prices. Importantly, the three deposits – Mt York, Iron Stirrup and Old Faithful – all remain open both along strike and at depth.

Study work will be carried out in tandem with ongoing exploration activities and, the potential for greenfields discoveries aside, Kairos will he hoping to delineate extensions to the mineral resource with the new round of drilling.

There is plenty of renewed interest in the gold prospectivity of the Pilbara region courtesy of De Grey’s Hemi gold discovery and Kairos, with its more than 1,500sqkm of strategic landholdings, is right in the thick of it.

Kairos is also on the hunt for new greenfields intrusive-hosted gold discoveries similar to Hemi and even a sniff of grade and length will have the market meercats sitting bolt upright as they scan the Pilbara region for Hemi lookalikes.