The full impact of the novel coronavirus outbreak has begun to weigh on the Australian economy, with aviation, commodities and education absorbing the worst of the shock. 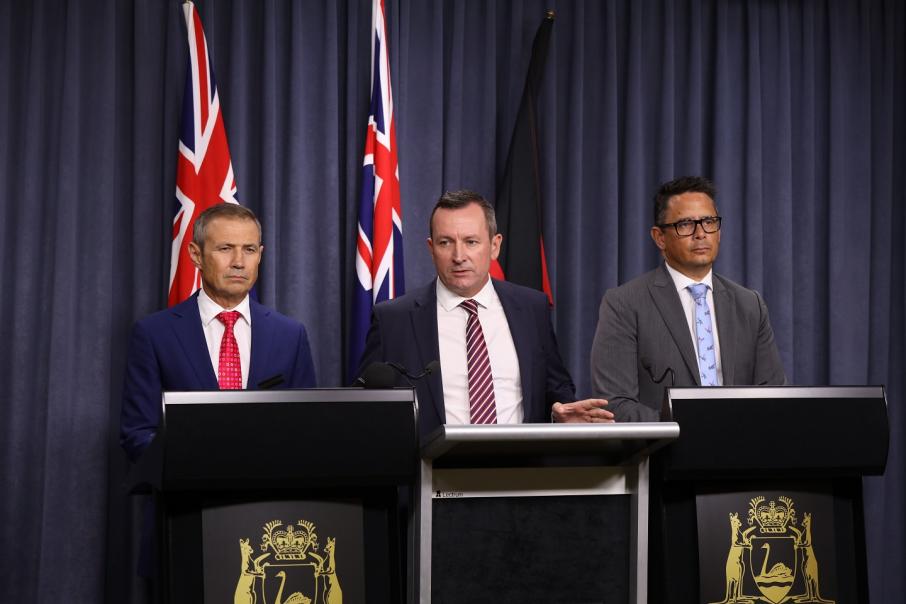 Roger Cook, Mark McGowan and Ben Wyatt said now was not the time to disengage from China. Photo: Gabriel Oliveira

The full impact of the novel coronavirus outbreak has begun to weigh on the Australian economy, with aviation, commodities and education absorbing the worst of the shock.

That comes as representatives from Western Australia’s tourism and education sectors told Business News last week it was too early to predict what effect a ban on group travel by the Chinese government would have on the state’s industries.

Dropping by more than $US10 per tonne over the weekend, the benchmark iron ore price fell to $US81.35/t today, after having hovered at around $US90/t throughout January.

That represents the lowest price for iron ore this year, and a concern for the state’s finances; budget documents from May 2019 estimated that for every $US1/t reduction in the iron ore price, state government revenue drops by around $81 million.

The coronavirus outbreak has so far killed about 360 people on the Chinese mainland, and one person in The Philippines.

There have been 12 confirmed cases in Australia but none in WA.

Airlines have begun taking precautions in the wake of the disease’s spread, with Qantas announcing it would suspend its direct services to Shanghai and Beijing until late March due to logistical issues following entry restrictions imposed by the Singaporean and US governments.

While that will only affect departures from Sydney, a representative from Perth Airport confirmed to Business News that China Eastern Airlines and China Southern would suspends their flights from Shanghai and Guangzhou, respectively, with the latter route to recommence in late March.

Flights between Shanghai and Perth were part of a trial that was set to run until February 17.

The cancellation of that trial deals a major blow to tourism operators and the state government, who had promoted the impact the flights would have on WA’s economy.

The education sector has faced issues in recent days, with Curtin University, The University of Notre Dame and The University of Western Australia requesting all students who had travelled to mainland China within the past 14 days to self-isolate for a two-week period in accordance with directives from the federal government.

StudyPerth chief executive Phil Payne had told Business News last week the problem had so far been logistical in nature, and that he feared misunderstandings over the virus could affect the broader community.

A total of 20 people at its Pilbara site are currently in isolation at the project’s main accommodation village, where their wellbeing is being closely monitored and care management arrangements finalised.

The company said none of the employees are considered suspected coronavirus cases.

"We’re currently working with our departments and contractors to identify any additional staff and contractors who have recently travelled to China," the statement added.

"While this measure clearly comes at great inconvenience to our affected colleagues and is placing additional burden on site-based resources, the health and wellbeing of our staff and contractors remains our top priority.

"Our actions have the support of the Western Australian Health Department and are in accordance with the company’s disease risk management procedures. We continue to keep relevant authorities and our staff and contractors regularly informed."

The state government has emphasised caution on the issue, with Premier Mark McGowan appearing alongside Health Minister Roger Cook and Treasurer Ben Wyatt this afternoon to allay public concern.

Speaking as a Qantas evacuation flight from Wuhan was due to arrive in Exmouth, Mr McGowan appeared confident, saying now was not the time to disengage from China.

"We will get through this issue, and we need to work together," he said.

"We need to maintain our strong relationship with China both now and into the future."

Mr Wyatt was confident that, despite the fall in iron ore prices, the budget's estimated surplus of $2.6 billion would not be affected.

"Because we have based the budget on a very low iron ore price ... means the budget at the moment is managing that very well," he said.