ANNIVERSARY SPECIAL: WA’s mining industry has undergone a dramatic transformation over the past quarter of a century, with iron ore replacing gold as the state’s most valuable commodity. 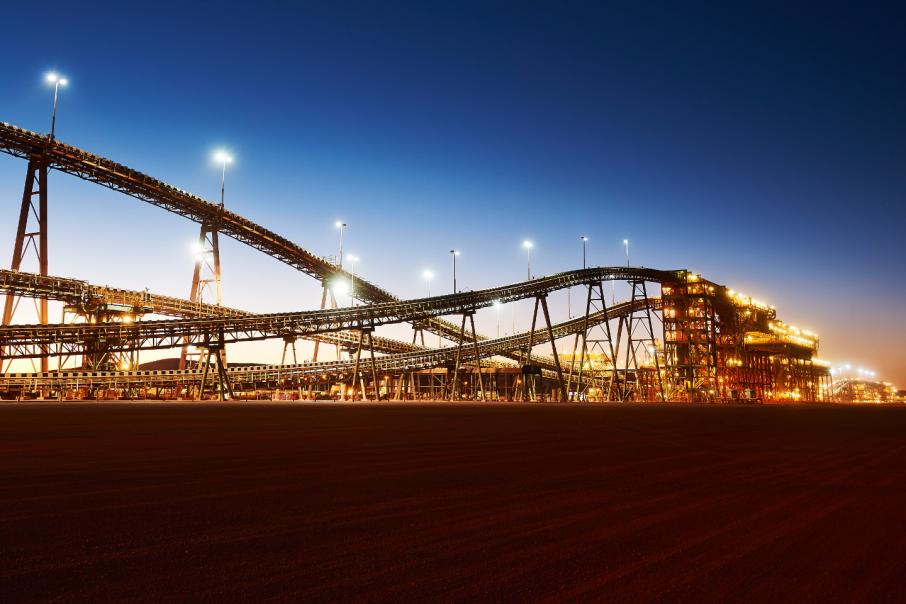 ANNIVERSARY SPECIAL: WA’s mining industry has undergone a dramatic transformation over the past quarter of a century, with iron ore replacing gold as the state’s most valuable commodity.

The value of Western Australia’s mining and petroleum production was about $12.3 billion in 1993. Gold was the state’s most valuable resource, accounting for 25 per cent of the overall worth, while iron ore contributed 24 per cent.

The massive uptick in industry value has been driven by an iron ore-led mining boom, which has transformed the makeup of the major contributors within the sector.

Iron ore represented 53.7 per cent of the state’s mining production at the end of the 2017-18 financial year.

The rapid expansion of China’s economy underpinned a surge in commodity prices from the mid-2000s, with the price of iron ore topping $US200 per tonne in 2008.

The sustained rise in prices led to an investment boom, which allowed production to continue increasing, even in the face of the GFC.

Collectively, WA’s iron ore production grew from less than 200 million tonnes in 2003 (see graph) to more than 800mt in the 2018 financial year.

According to data from the Australian Bureau of Statistics, mining investment in WA grew from $3.9 billion in 2003 to $48 billion a decade later.

They spent billions of dollars collectively in the Pilbara as they ramped-up iron ore production to capitalise on rising prices.

The investment surge began in 2002 when BHP approved its Mining Area C development and the Port and Capacity Expansion (PACE) project, which involved an expansion of its Port Hedland port and rail facilities.

Despite the arrival of the GFC in late 2008, investment in the local resources sector grew at an average annual rate of 23 per cent for the next five years.

Over time, BHP branded each expansion as a newly numbered ‘rapid growth’ project.

Those mines are now key to the company’s network of 16 iron ore mines, four port facilities, a 1,700-kilometre rail network and related infrastructure.

In 2018, Rio is forecasting production of about 330mt across its iron ore operations.

The two mining giants were also involved in a number of major deals as they consolidated their dominance in the local market.

In 2000, Rio made a play for diversified miner North, which held a majority stake in Robe River Iron Associates, an iron ore joint venture with significant assets in the Pilbara.

Another diversified miner, WMC Resources, was the subject of a takeover by BHP in 2005.

BHP eventually won control of WMC with a $9.2 billion proposal, merging the business into its own operations.

In 2007, BHP made a bid to purchase Rio, which was rejected and eventually abandoned the following year with the onset of the financial crisis. 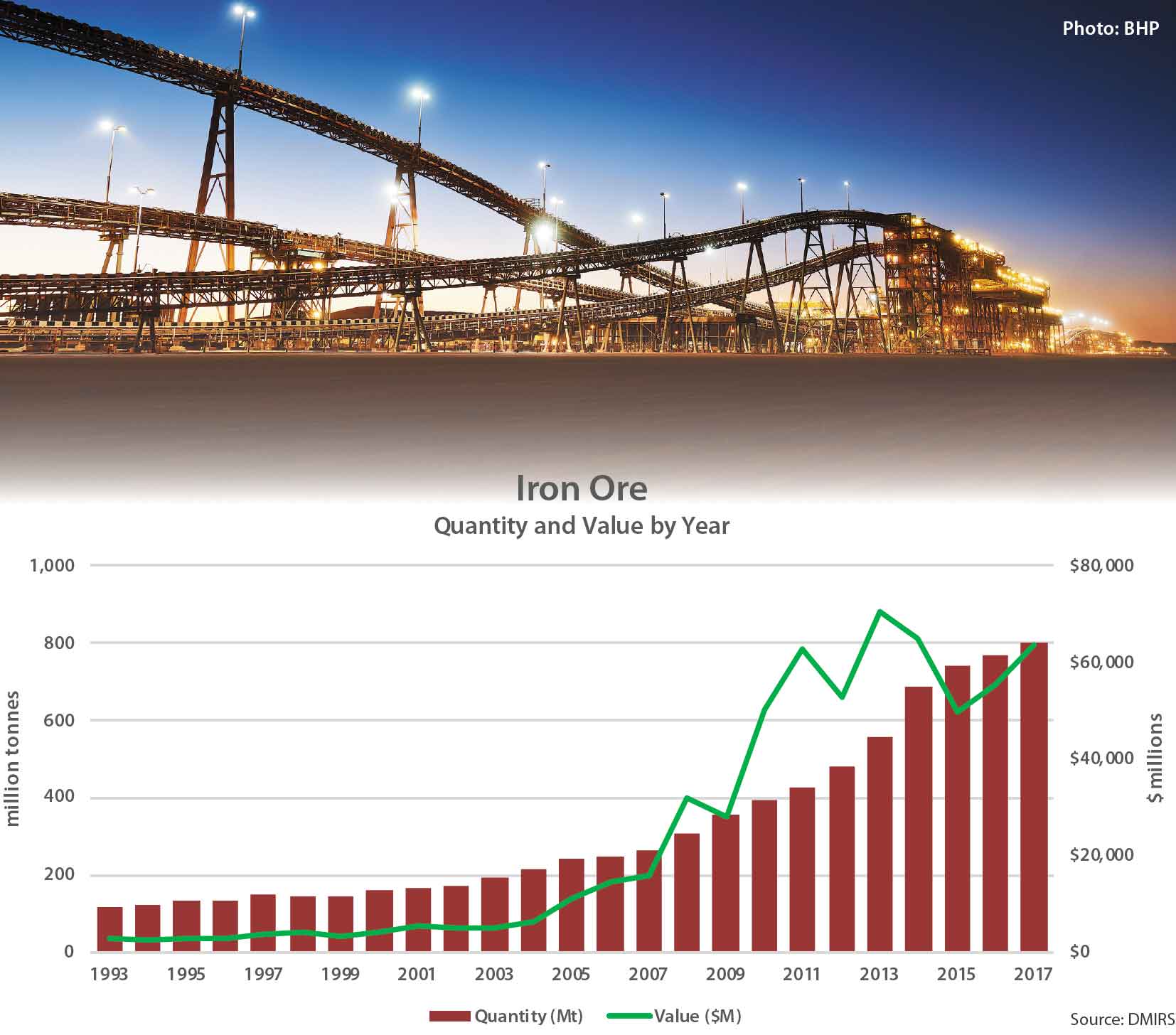 The profitability of the iron ore industry also encouraged new companies to enter later in the decade, including the arrival of Andrew Forrest’s Fortescue Metals Group.

The former stockbroker set up Fortescue in 2003 after being forced to stand down as chief executive of his first major venture, Anaconda Nickel, due to project delays and a big fall in the company’s share price.

Turned down by sceptical investors in Australia, Mr Forrest raised money in the US and created a third big player in the local sector, which began shipping in 2008.

Karara Mining, which is a joint venture between China’s Ansteel Group and Gindalbie Metals, was established in 2007, while David Flanagan-led Atlas Iron began production at Pardoo in late 2008.

More recently, Roy Hill Holdings, which is majority-owned by Gina Rinehart’s Hancock Prospecting, loaded its first shipment in 2015 and now operates a 55mtpa mining, rail and port operation in the Pilbara.

Due to the remarkable growth of iron ore, the gold sector’s share of industry value has fallen from a quarter in 1993 to about 10 per cent this year, despite relatively steady production over the past 25 years (see graph).

However, gold remains the state’s second most valuable mineral resource after iron ore, collecting $11.4 billion in sales for FY18. 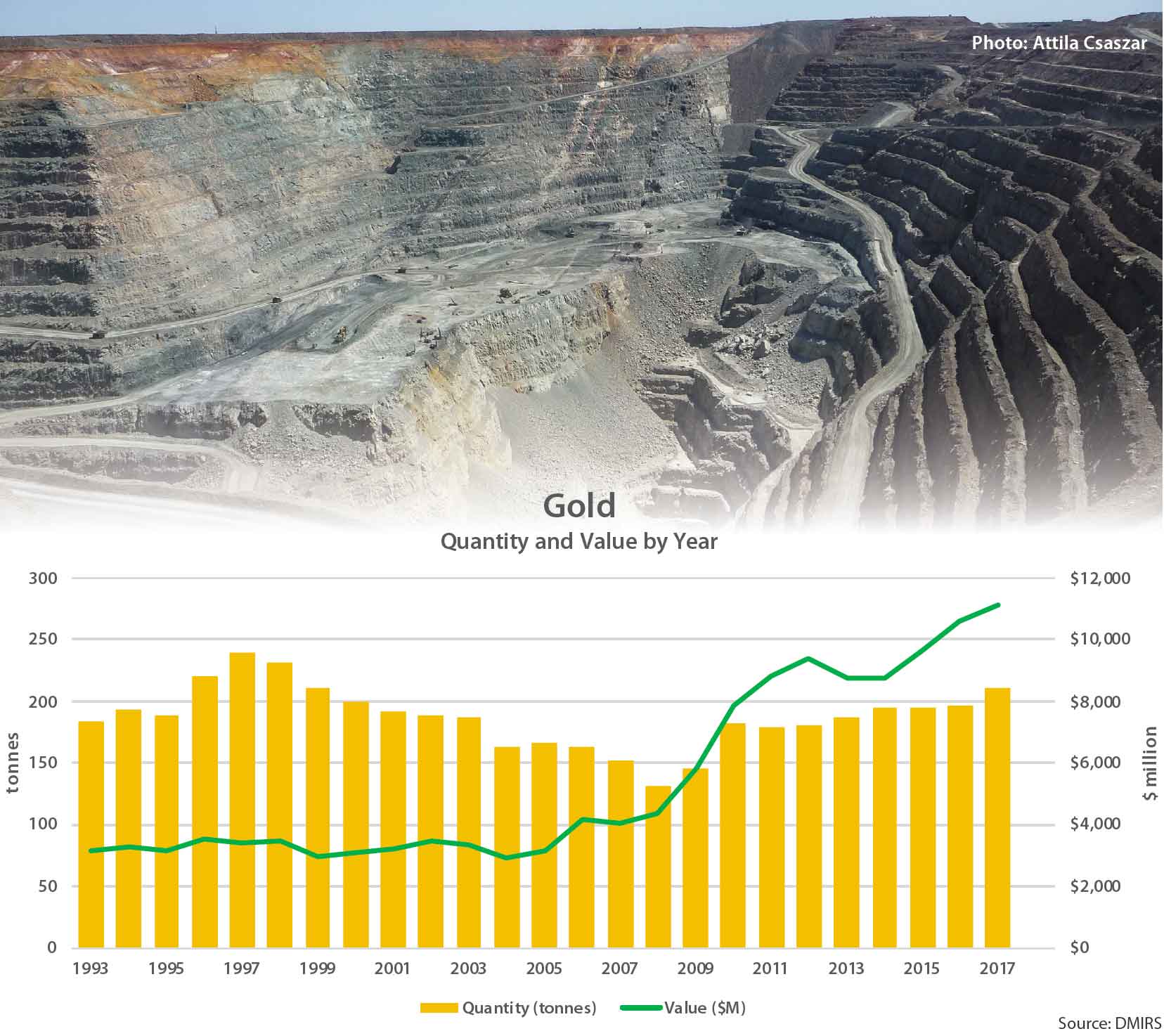 Since 1993, the Kalgoorlie Super Pit has been the largest contributor to the state’s gold output, with average annual production of about 800,000 ounces (22 tonnes).

In 2013, the Boddington mine, which is also owned by Newmont, became WA’s most productive mine and has retained that position ever since.

Originally operated by US miner Homestake Gold and local producer Normandy Mining via Kalgoorlie Consolidated Gold Mines, the Super Pit underwent an ownership change at the turn of the century.

Following a series of takeovers and mergers, Kanowna Belle-operator Delta Gold was taken over by Barrick in 2006 to give the Canadian company a dominant position in the local market.

After a period of consolidation by the larger mining companies, a wave of local mid-tier producers has emerged in recent times, led by Northern Star Resources.

The smaller producers have taken underperforming mines from the bigger producers and transformed the assets into efficient operations.

Bill Beament-led Northern Star Resources acquired the Paulsens mine in 2010 from Intrepid Mines for $40 million and now boasts annual production of 575,000oz across three operations in WA.

Raleigh Finlayson’s Saracen Mineral Holdings is another relatively new player, having purchased Carosue Dam from Melbourne-based St Barbara in 2005; the WA miner has grown output to over 300,000oz per annum.

Nickel and alumina have also played a crucial role in the state’s mining history, with steady increases in the production of both commodities.

WMC led the nickel rise in the 1990s and into the new decade, with its Mount Keith, Leinster and Kambalda operations, and has remained the dominant player since being merged into BHP.

BHP Nickel West, along with the likes of Mincor Resources, Western Areas, Panoramic Resources and Independence Group were major contributors.

Minara Resources’ (formerly Anaconda) Murrin Murrin operations and First Quantum Minerals’ Ravensthorpe mine, which restarted in late 2011 but has since closed, were key to the uptick in production.

The local alumina sector comprises two producers, with South32-owned Worsley Alumina and US company Alcoa both operating in the state’s South West.

Together these two operators nearly doubled production since 1993 to 14.8mt this year.