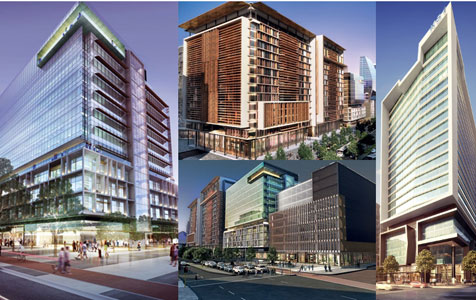 TWO of Australia’s leading property investment groups have committed close to $1 billion in the past three weeks to increase their exposure to Perth’s office sector.

Dexus’s $435 million investment in Perth’s newest office precinct, Kings Square, comes just weeks after Charter Hall revealed it was undertaking exclusive due diligence on Raine Square as part of deal believed to be worth $455 million.

“The institutions want exposure to Perth; over $100 million and under $500 million, that’s their hunting ground, and there’s not much property that fits that description when you get right down to it,” Mr Edwards said.

Dexus’s $435 million purchase of the first three towers proposed for the Kings Square site includes a five-year income guarantee on any remaining vacancies in the office buildings once construction has concluded.

Vendor Leighton Properties has already attracted some big-name tenants to the development, including oil and gas giant Royal Dutch Shell, while Leighton revealed this week its subsidiary John Holland would move its headquarters from Herdsman to the precinct.

This deal will push the pre-leased component of the towers up to 45 per cent. Leighton is also in negotiations to sell a separate 13,000 square metre property in the Kings Square project to Western Australia-based health insurer HBF.

Leighton’s success marketing Kings Square and the coup of securing Shell as an anchor tenant has created a lot of interest in Kings Square, in sharp contrast to the city’s other major office development site at Elizabeth Quay.

US energy giant Chevron has consistently been linked with the iconic riverside locale, but the group last week extended its lease at QV.1 to 2023.

Shell’s decision to shift its headquarters to Kings Square caught a number of property pundits by surprise.

However comparing Kings Square with Elizabeth Quay is like comparing apples with oranges, according to Jones Lang LaSalle WA managing director John Williams.

“Kings Square and the whole of The Link project have a significant role to play in the development of Perth because it’s the opportunity to build campus-style, lower-rise, large floor plate, good value, quality accommodation.”

It wasn’t an obvious chose for Shell, given the oil and gas sector’s preference for premium office accommodation but neither does it point to any trend, according to market watchers.

It’s understood law firm Corrs Chambers Westgarth and accounting firm Deloitte have signed up for the second, smaller tower at Brookfield Place; and despite speculation a third tenant would be required to trigger construction, site works could commence as early as July.

Both of these tenants are currently in Dexus’s only other office asset in Perth, Woodside Plaza at 240 St Georges Terrace.

Collectively, the construction of the first three towers at Kings Square will add 52,781sqm of office and retail space to Perth’s CBD and construction is expected to start later this year.

“This transaction is a tangible example of our strategy to pre-sell large commercial developments and efficiently use our capital, Leighton Holdings chief executive Hamish Tyrwhitt said.

Dexus said it would fund the acquisition, which will be made in collaboration with its wholly owned Dexus Wholesale Property Fund, using a combination of existing and new debt facilities.

Dexus Property Group and Dexus Wholesale Property Fund will hold equal 50 per cent stakes once the transaction is settled, which is expected to occur by the end of the month.

The acquisition is forecast to provide Dexus with a blended average initial yield of 8 per cent on completion based on pre-commitments and income guarantees.

Once built, Leighton’s newly established Group Property Services will coordinate the leasing of the towers.

Construction of the first three towers is expected to be complete by 2015.