Daniel Sharp has brought the culinary skills learned in some top restaurants to his business venture in Albany. Emily Morgan reports. 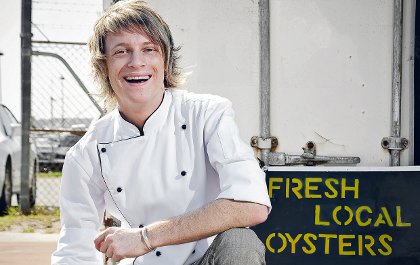 HE may be young, but 22-year-old Daniel Sharp has a keen eye for steering his catering business down a specific path.

Mr Sharp started Sharp Infusion in his hometown of Albany in the beginning of 2009, having done his apprenticeship at Coco’s in Perth, and completing the bulk of his chef’s qualifications at a fine dining restaurant in Albany.

“I loved cooking but was completely over repetitive cooking and the stress of a restaurant and the way kitchen politics works,” Mr Sharp told Gusto.

Starting Sharp Infusion was the answer to his ‘issues’ with commercial kitchens, and he focused on building the business, and its menu, around seasonal produce.

Mr Sharp has a strong connection with the produce of the Great Southern – his father runs a commercial fishing business – and as a result of this exposure he saw the opportunity to develop his own niche operation.

“I had a huge influence from my mum as well and every time I went to grandma’s place she was making jam or cakes. I would be in the kitchen trying to help and getting my hands covered in whatever she was making and I loved it,” Mr Sharp says.

“Having dad as a fisherman here enabled me to have a huge amount of experience to source and select and prepare the seafood the region has to offer. Eventually I learned how to perfect it.

“The produce down here is outstanding, there is such a broad range and the quality is unbelievable, especially coming up to this time of year.”

Mr Sharp’s business grew organically, starting out in his parent’s home. After his first event – a dinner party for 10 people – the calls started coming; and it wasn’t just friends of the family.

Eventually, Sharp Infusion started catering for cocktail parties and dinner parties with more than 100 people. Mr Sharp then added to his credentials by running cooking classes, which he extended to corporate events in order to attract businesses looking for a different kind of team-building experience.

He hired his first staff member six months into the business – a waiter – and has since hired a chef. In peak periods Mr Sharp has 15 staff members to call on for his busiest events.

With anywhere between one and four events in a week, the business has built its client contact list by releasing products such as Mr Sharp’s free e-book ‘7 Sneaky Secrets to Cooking Perfect Seafood’ on the business’s website, which has built Sharp Infusion’s marketing capacity in the area.

The majority of his business is in the Great Southern, but Sharp Infusion’s capacity to go anywhere and Mr Sharp’s passion for taking his local produce across Australia, has helped open up the market.

Shopping at the local farmers’ markets and retail butchers is sufficient when catering for up to 50 people, but beyond that Mr Sharp says he has forged good relationships with local suppliers and wholesalers.

Mr Sharp is enthusiastic when talking about food and cooking, his business, its name, reputation and clients, but it is when he talks about the quantity and quality of local produce that his real passion emerges.

“The road that travels from Albany to Denmark is a hot spot for producers. They grow asparagus along there, all these beautiful berries, and it is all in a close-knit area; beautiful gourmet lettuces, hydroponic herbs, every vegetable you can think of – cheese, wine, blueberries, micro greens, you name it you can get it along that road,” he says.

With plans to eventually bring more of his business to Perth, Mr Sharp isn’t worried about the difficulty of sourcing produce.

“I will still have access to everything that I have down here, it will just be a case of costing a little bit more because of paying for freight,” he says.

He has also moved to grow awareness of the business through involvement in events such as the Perth Royal Show, and organising events with fellow local business owners such as the upcoming French-inspired long table lunch, Emerge, which will signify moving from winter to spring; a reason for Mr Sharp to be excited, given spring and summer are his busiest months.