Infinity to make lithium chemicals at Spanish mine

Infinity Lithium has reaffirmed its JV partnership with engineering firm Sacyr/Valoriza Mineria and aligned a strategy to accelerate technical work at its San Jose lithium project in Spain. The company is proposing to produce both lithium hydroxide and lithium carbonate on site at the mine, taking full advantage of the availability of affordable power in the area and re-writing the lithium playbook in the process. 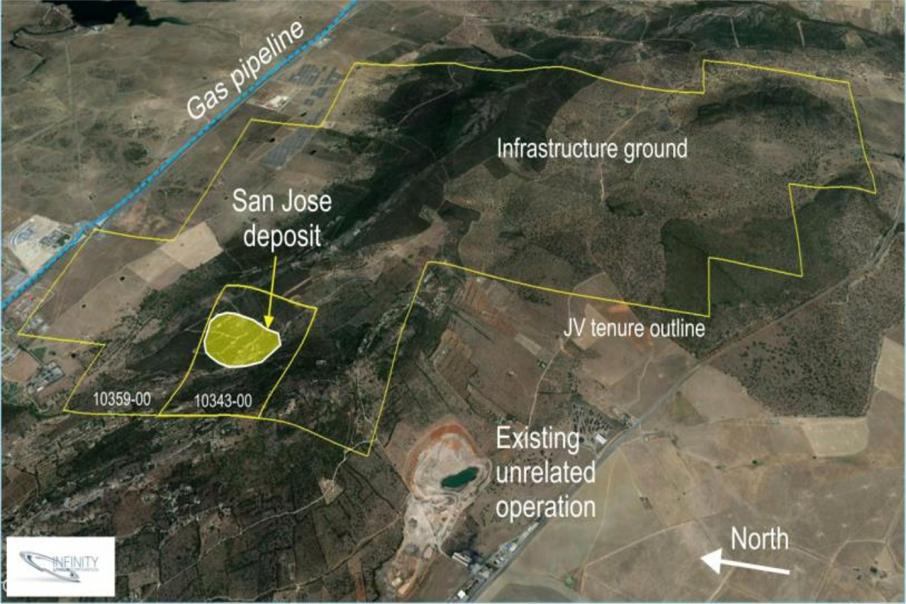 With its drilling program completed, a mineral resource estimate in the bag and feasibility studies now well underway, Infinity Lithium is looking at all the options available for its San Jose lithium project in western Spain.

Whilst the feasibility study is focussed on a fully integrated mining and lithium processing facility to produce a lithium carbonate product for Europe’s emerging battery sector, a scoping study in June confirmed that highly sought-after lithium hydroxide could also be produced from the San Jose ores.

The availability of battery-grade lithium chemical products for the EV industry, remains in tight supply with many raw material suppliers investigating the viability of downstream processing facilities.

Over recent months, many of the industry’s main players have realised that the real value in the lithium market, comes from the actual production of high-quality lithium battery chemicals, rather than just transporting raw materials to end-users.

Specifically, Neometals has announced the potential construction of a lithium hydroxide plant near Kalgoorlie to process spodumene concentrates from its 13.8%-owned Mt Marion operations.

Abermarle/Tianqi already produces an upgraded spodumene product from its massive Greenbushes operation in the Southwest region of W.A, however both have plans for lithium battery chemical plants moving forward – Abermarle at Kemerton, near Bunbury and Tianqi within the Kwinana industrial complex.

Similarly, plans are afoot to build a lithium processing plant in the Pilbara to take full advantage of that regions extraordinary lithium endowment.

Whilst most mining operators that are looking to turn their hand to downstream processing will need to contend with transportation and logistical issues, Infinity will have no such impediments.

Infinity is planning to build a lithium carbonate plant, and potentially even a lithium hydroxide plant right along side its proposed San Jose lithium mine. Infinity has an exquisite opportunity to do this give that a gas pipeline, and therefore affordable energy, runs right past the front door at San Jose.

Infinity Managing Director and CEO, Adrian Byass said: "We can see the market aligning now with opportunities for companies to invest in projects globally. It is increasingly important to have flexibility in meeting market demands and to recognise the window for investment is open currently".

Infinity’s obvious endgame is to take advantage of the many and varied European Government and private sector plans to develop a battery manufacturing hub in that region.

Spain is currently the second largest manufacturer of automobiles in Europe and it is eyeing off a big piece of the evolving EV market.

Research group Citigroup recently forecasted 10 per cent global battery electric vehicle penetration by 2030 as a base case scenario, by which time it predicts Europe and China will still be the biggest markets.

That share could be as high as 18 per cent by 2030 if emissions targets for Europe and similar targets in China, are achieved.

Infinity said that it expects lithium prices to remain strong and may review upgrades to its highly conservative long-term pricing assumptions that used a base case of USD$10,000 per tonne for lithium carbonate in the 2017 scoping study.

London-based Wood McKenzie said in March that spot lithium carbonate prices on the domestic market in China had remained robust and about   $16,000 per tonne at the end of February 2018.

The firm sees prices averaging approximately $13,000 per tonne throughout 2018.

According to Infinity management, recent meetings between the company and its in-country JV partner, major Spanish construction and engineering group, Sacyr/Valoriza Mineria, reaffirmed the partnership and strategy to accelerate technical and market related work at San Jose.

Recent technical work has also indicated there is potential to create a significantly smaller surface environmental footprint at San Jose by steepening open pit wall angles and thereby decreasing overall strip ratios, without having any materially negative impact on the project economics.

Infinity has a real opportunity to create a one stop shop for lithium supplies in the heart of Europe’s burgeoning lithium battery industry.

It is seeking to re-write the existing playbook where one party mines it and then transports it to another party who turns it into battery chemicals.

Infinity is seeking to do all this on site which should make the lithium enthusiasts more than just a little curious about the project’s economics.