Infinity Lithium is looking to either farm-out or divest its non-core Banio potash project in southern Gabon after pencilling in a maiden inferred JORC mineral resource of 1.67 billion tonnes at 16.1% potassium chloride. The project includes high grade sylvinite that includes seams at 30.7 million tonnes at 25.3% potassium chloride and may be amendable to the lower cost, in-situ leach mining method. 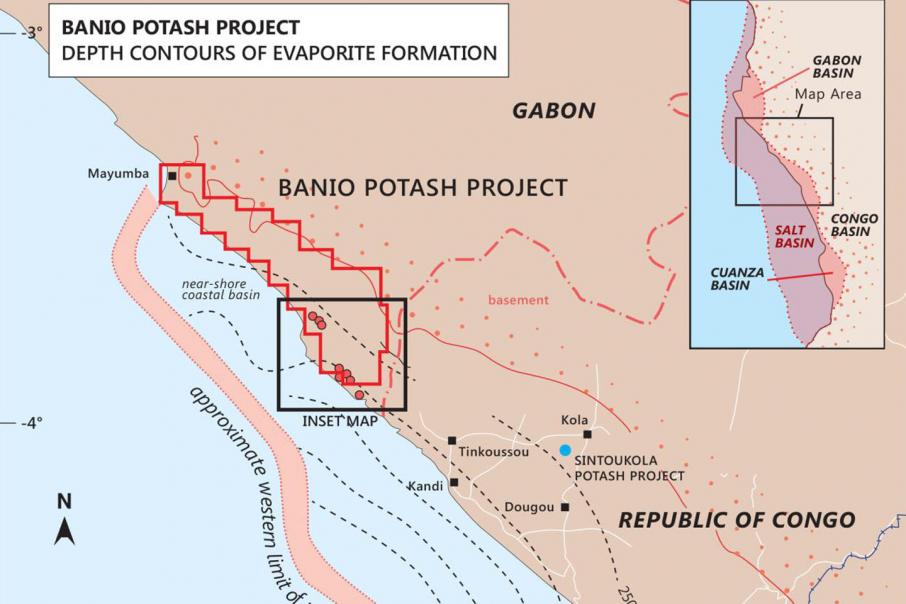 Infinity Lithium is looking to either farm-out or divest its non-core Banio potash project in southern Gabon after pencilling in a maiden inferred JORC mineral resource of 1.67 billion tonnes at 16.1% potassium chloride.

The company said that with its focus squarely on the San Jose lithium project in Spain and the resurgence in potash prices, this marks the right time to seek strategic partnerships or transactions for Banio.

Notably, there is significant potential for growth as the maiden resource covers just 5km of the more than 20km strike at Banio.

The Banio project is located in the south-west corner of Gabon on the border with the Republic of Congo and is located 70 km north of the world class Kola and Dougou potash deposits, all of which are located within the same sedimentary horizons of the Congo Basin.

Banio is located just 5km from the coast and adjacent to the Banio water way, which provides a potential export pathway.

While no technical studies have been completed, the company said the resource could be amenable to the lower cost, in-situ leach mining method.

Leach mining involves boring injection and recovery wells into the resource before pumping a heated brine solution into the deposit to dissolve potash salts.

The dissolved salts are then pumped out to the surface where the water is evaporated, either artificially or in solar evaporation ponds, leaving the valuable salt and potash behind.

There is also potential to use Gabon’s oil and gas resources to provide energy for evaporation, if required.

Infinity previously placed Banio on care and maintenance due to the downturn in potash prices from 2015 to 2018.

Infinity Managing Director Ryan Parkin said: “Based on a large amount of historical oil exploration drilling, the success in testing a small portion of the 2016 exploration target and converting it into JORC resources bodes well for further work.”

“This resource has the potential to increase in size significantly with the next phase of drilling on the property.”

The potash market has been recovering from a period of oversupply with granular muriate of potash selling for between USD$335 to USD$340 per tonne in Brazil, according to market information provider ICIS.

Demand in the form of potassium-rich fertilisers is expected to be grow as the global population continues to increase and food production struggles to keep pace.