Indiana Resources has doubled down in South Australia’s revered Gawler Craton mineral province, this week locking up an additional 2,465 square kilometres of prospective tenure across the world class multi-commodity terrane. The new tenement applications double Indiana’s holding in South Australia to more than 5,000 square kilometres that mostly surround the Tarcoola gold mine that Barton Gold is about to breathe new life into. 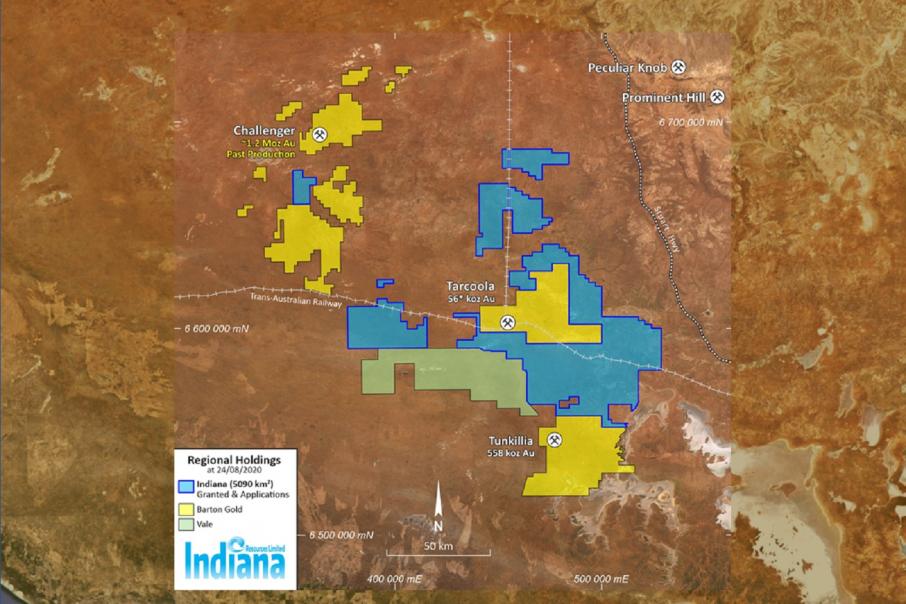 Indiana Resources has doubled down in South Australia’s revered Gawler Craton mineral province, this week locking up an additional 2,465 square kilometres of prospective tenure across the world class multi-commodity terrane.

Indiana’s Gawler project is located 620km north of Adelaide in South Australia. The company secured its initial footprint in the region back in August through a transaction with SA privateer Patron Resources. The acquisition of two of Patron’s wholly owned subsidiaries delivered 14 granted exploration licenses and one granted mining lease to Indiana. The original acquisition, which is nearing completion, put the company on the map in the region with an initial holding of over 2,600 square kilometres of tenure.

The new tenement applications announced this week double Indiana’s holdings in South Australia’s Gawler Craton to more than 5,000 square kilometres that mostly surround the Tarcoola gold mine that Barton Gold is about to breathe new life into.

Barton is also looking to restart the mothballed Challenger gold mine about 120km to the north west of Tarcoola which may in time present Indiana with a quick and easy pathway to production via toll treating.

“The application for these additional exploration licences consolidates a strategic and dominant position in the Gawler Craton. With due diligence and legal agreements nearly finalised with Patron, we look forward to commencing drilling in the near future on some high priority prospects.”

“We have provided our shareholders with a low-cost, low-risk exposure to some highly sought-after exploration ground in South Australia in an area proven to be prospective for significant gold mineralisation.”

The Gawler Craton region also hosts the colossal Olympic Dam and Prominent Hill copper-gold mining operations and is rapidly becoming a mecca for gold and base metals explorers, enjoying something of a resurgence in recent times.

The recently acquired Patron gold projects host a number of prospective targets including Lake Labyrinth and Boomerang – Boomerang lies along strike from Barton Gold’s Perseverance mine.

It also includes the Double Dutch prospect, which has returned a number of solid drill results including 34m at 1.18 g/t gold from 13m and 25m at 1.25 g/ t gold from 43m. Drilling at Double Dutch covers more than 600m of strike and interestingly, the discovery remains open in all directions.

“This acquisition delivers a strategic and advanced exploration package in a region that has historically producing mines and strong recent exploration success. Importantly, this transaction allows Indiana to actively explore in this exciting and low-risk region at a time of record gold prices. With multiple drill ready targets across the tenement package already identified, we are going to move quickly to target those areas that demonstrate strong potential for moderate to high-grade gold opportunities.”

The Lake Labyrinth target lies in the east of the project area, where drilling of the Minos and Ariadne prospects indicates that gold mineralisation extends over several kilometres of strike, has also been a focus. Gold mineralisation appears to be associated with quartz-rich lodes in a layered shear zone which looks like it may be a walk-up drill target for Indiana’s evolving exploration program.

The results from Lake Labyrinth hint at a large auriferous system that appears to increase with grade at depth, a not uncommon occurrence in the better ore systems of the Gawler.

A first-pass evaluation of the Minos and Ariadne drilling suggests that the targets would greatly benefit from a larger systematic drilling program.

Indiana is continuing its evaluation of its leases with exploration expected to kick off throughout the terrane once the Patron transaction is finalised, with the Lake Labyrinth prospects likely to be a high priority.

Due diligence for the Patron transaction quickly highlighted a range of geological targets in the ground adjacent to the granted tenement positions which led Indiana to snap up the additional four tenements – two north of Tarcoola, one to the west and a fourth south of the Challenger mine.

With a growing posse of explorers and developers looking to descend on the Gawler Craton region now, Indiana is holding a lot of cards with its 5,000 square kilometre tenement package. Any new discovery in this increasingly fashionable address will no doubt shine a light on the sheer size of Indiana’s land holdings as the company goes about proving up its own intriguing advanced targets.