Impact Minerals has secured a shot at what it sees as a “walk-up drill target” at Doonia in Western Australia’s Eastern Goldfields after being granted tenure over an area covering an impressive 3km-long porphyry target near Lefroy’s promising Burns copper-gold discovery. The company is now planning first-pass exploration at the project and expects to kick off drilling in the second half of 2021. 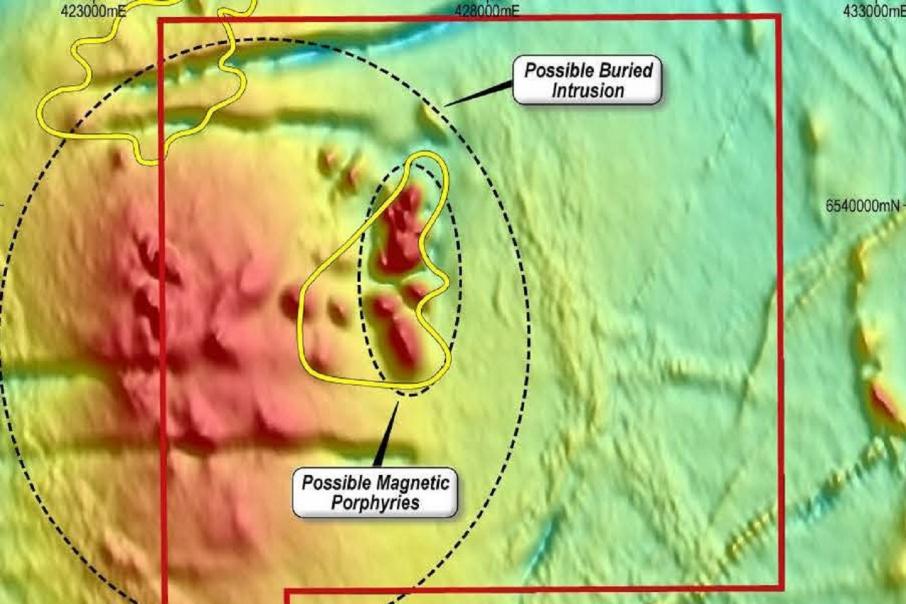 A geophysical image of the Doonia target, showing Impact’s magnetic porphyry target in the centre of the plan. Credit: File

Impact Minerals has secured a shot at what it sees as a “walk-up drill target” at Doonia in Western Australia’s Eastern Goldfields after being granted tenure over an area covering an impressive 3km-long porphyry target near Lefroy’s promising Burns copper-gold discovery. The company is now planning first-pass exploration at the project and expects to kick off drilling in the second half of 2021.

The company has 80 per cent of Doonia in a joint venture with privately owned Odette Resources, which has a 20 per cent free-carried interest in the project up until a decision to mine.

Impact says its new exploration target was identified in a review of prospective Eastern Goldfields intrusion-hosted gold country and Lefroy Exploration’s success in finding significant gold-copper-magnetite mineralisation in a magnetic porphyry intrusion nearby at Burns has added to its belief in the potential at Doonia.

The tenement overlies a large magnetic anomaly showing all the hallmarks of a porphyritic intrusion similar to that drilled at Burns, according to Impact.

Lefroy’s discovery east of Kambalda has proven a boon for the explorer, with a plethora of thick copper-gold drill hits commanding market attention. Drill intercepts include 106m at 0.32 grams per tonne gold and 0.55 per cent copper from only 24m depth and a discovery hole that returned 38m grading a stunning 7.63 g/t gold and 0.56 per cent copper from 134m down-hole.

Unearthing Burns propelled Lefroy’s share price from just $0.19 back in February 2021 to a high of $1.52 in early April, a trajectory others are no doubt keen to emulate.

Doonia’s geology is interpreted by Impact to host a deep-seated intrusive complex which is likely to be of granitic origin, with the host body sitting in the west of Impact’s tenure with a diameter of more than 6km. However, an interpreted swarm of magnetic porphyry units on the eastern margin of the parent intrusive has drawn Impact’s attention.

The porphyry dyke swarm has a peculiar high-magnetic geophysical signature and extends over more than 3km of strike. The target is further enhanced by historical geochemical sampling which has outlined a 2,500m long and 1,000m wide anomaly which is coincident with the magnetic target. The swarm shows elevated levels of gold, copper, bismuth and antimony, which is regarded as a text-book signature for porphyry mineralisation, making it an enticing target for drill testing.

Impact is currently planning a deep drilling program targeting the Doonia porphyry swarm. The company has also initiated heritage surveying and clearance approvals in preparation for the commencement of on-ground exploration, which will include both sampling and drilling.

Prior to Doonia, Impact said it had given itself “three rolls of the dice” with its other key projects which include precious and base metals targets in the Lachlan Fold Belt, near Broken Hill in New South Wales and adjacent to the exciting Julimar discovery in WA.

Doonia presents as an exciting new opportunity for Impact in a region that has been throwing up quality minerals deposits, suggesting that the odds are perhaps weighted in the company’s favour.