Impact Minerals’ PGM-base metals hunt at its Broken Hill project in NSW is starting to get interesting. Drilling is set to commence at the Red Hill and Little Broken Hill Gabbro prospects to follow-up previous stellar hits including 138m going 0.3 grams per tonne palladium, platinum and gold, or “3PGM”. Further drilling is also on the cards for the third quarter. 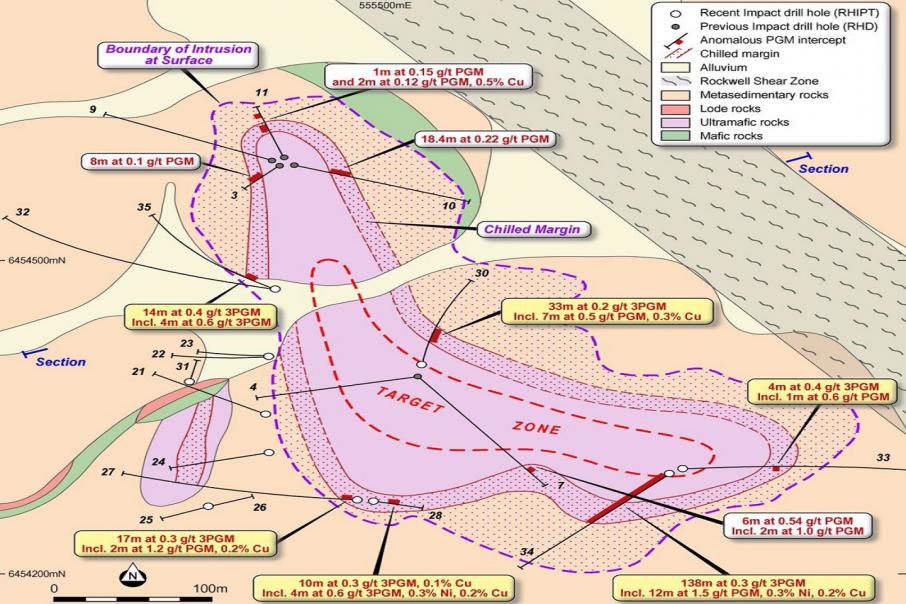 Impact Minerals’ PGM-base metals hunt at its Broken Hill project in NSW is starting to get interesting. Drilling is set to commence at the Red Hill and Little Broken Hill Gabbro prospects to follow-up previous stellar drill hits including 138m going 0.3 grams per tonne palladium, platinum and gold, or “3PGM”. Further drilling is also on the cards for the third quarter.

Following a successful drilling campaign completed at Broken Hill late last year, Impact has wasted no time in getting the rods turning once again after securing a rig at short notice. The new campaign marks the start of the 2021 field season for the up-and-coming explorer.

At Red Hill, drilling will test for massive sulphide mineralisation at depth where the 138m hit going 0.3 g/t 3PGM from surface was returned. Intriguingly, the intercept also includes higher-grade intervals of 2m going 2.3 g/t 3PGM from 75m depth and 12m going 1.5 g/t 3PGM and 0.2 per cent copper from 103m.

The discovery hole was designed to test a soil geochemistry anomaly and the results demonstrate for the first time that the chonolith-shaped ultramafic intrusion hosts significant thicknesses and shallow disseminated PGE, copper and nickel mineralisation.

The intercept remains open at depth and Impact identifies the area in the vicinity of the hole as a “priority” for follow up.

The company says the higher-grade intercepts in the hole located between 103m and 135m depth are situated within 25m of the contact of the intrusion with the surrounding rocks.

In total, 10 out of 12 holes that penetrated the margin of the chonolith returned anomalous intercepts of 3PGM with variable copper and nickel located within 30m of the contact with surrounding rocks.

The intercepts together define what the company refers to as a “ring of PGM” around the intrusion at depth where the mineralisation occurs within a so called “chilled margin” of the intrusion.

Impact also believes there is potential for high-grade PGE veins to be discovered at Red Hill.

Previous drilling immediately to the west of the intrusion returned a head-turning hit of 3.5m going 162.4 g/t 7PGE.

The prospect hosts a 7km long and up to a 1km wide layered ultramafic to mafic intrusion where broad widths of up to 60m of strongly anomalous 3PGE mineralisation were intercepted in all the drilled areas last year.

Impact says the mineralisation is increasing in thickness and grade at depth and to the south and remains open in all directions. The company believes that Little Broken Hill Gabbro has potential to host a significant deposit at depth or along trend.

Impact is also eyeing a follow-up reverse circulation campaign at Red Hill and Little Broken Hill Gabbro that is anticipated to commence in the third quarter this year.

Interpretation of the data from the 2020 campaign together with the results of the upcoming diamond drilling will be used to design the reverse circulation program.

Broken Hill is already looking the goods and a few pulses are likely to quicken as the quality targets are peppered with drilling by Impact in the months ahead. The 2021 campaign may just prove to be transformational for the Perth based explorer as it intensifies its PGM and base metal pursuit.