Impact Minerals has been exploring its ground in the prolific Lachlan Fold Belt of New South Wales and the company’s efforts have unearthed some exciting results with rock chips from the Greenobbys prospect returning up to 9.5 g/t gold, 215g/t silver and 745ppm bismuth. Rock chip samples from the Boda South prospect also returned up to 0.1 per cent copper, 2g/t silver and 40ppm bismuth. 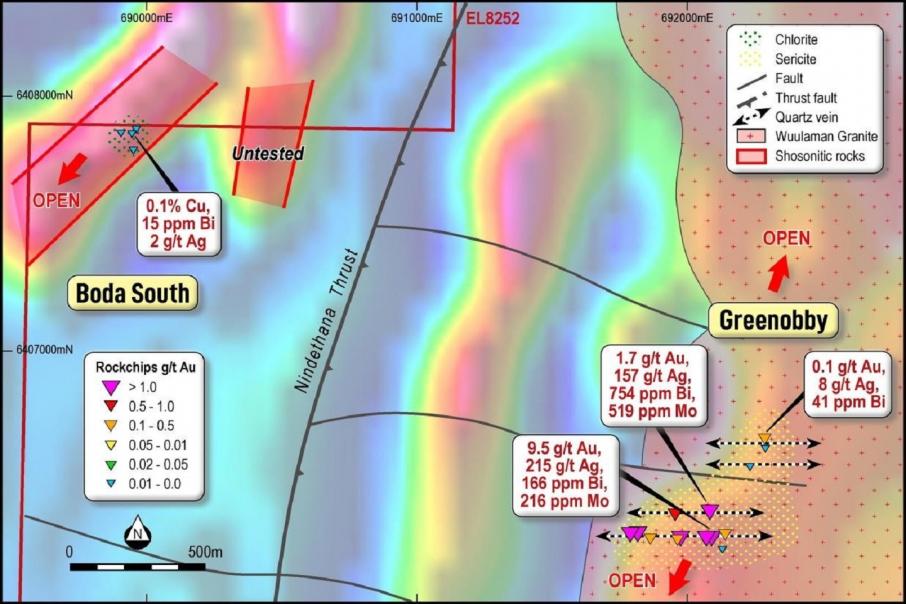 Impact Minerals has been exploring its ground in the prolific Lachlan Fold Belt of New South Wales and the company’s efforts have unearthed some exciting results with rock chips from the Greenobbys prospect going up to 9.5 grams per tonne gold, 215g/t silver and 745 parts per million bismuth. Rock chip samples from the Boda South prospect also returned up to 0.1 per cent copper, 2g/t silver and 40ppm bismuth.

The Perth based company said results from its current work program at the Commonwealth project have confirmed the ground’s potential to host major porphyry copper-gold deposits and notably, other styles of intrusion-related deposits.

Interestingly, the Greenobbys and Boda South prospects have seen no prior drilling or any significant exploration.

Boda South appears to contain all the geological and geochemical ingredients that point towards a significant system with pathfinder elements such as bismuth returning in the order of 700 per cent higher than the upper limit of a number of other well known deposits.

At Boda South, the copper-gold anomaly also appears to be located between two magnetically anomalous rock units, which are thought to represent an altered “skarn”. Impact said Alkane’s Boda deposit is also in a similar geological position - between two magnetic units.

Notably, Impact said the veins at Greenobbys extend for at least 500 metres in a north west trending zone. This is significant as most epithermal-type deposits have typically small footprints and Impact said Greenobbys may cover an area of at least several hundred square metres, with the vein system also open along trend and at depth.

Greenobbys also appears to be hosting a number of other anomalous metals including bismuth, molybdenum in concentrations up to 519ppm and tellurium going up to 40ppm.

Other metals are also present including selenium, thallium, antimony, arsenic, lead, barium and tungsten. The rare metals, indium and rhenium have also been identified in the samples.

This metal association, combined with the epithermal mineral setting has led the ASX listed company to interpret the system as “telescoped” - meaning that during its formation, the hydrothermal vent collapsed, causing the typically zoned metals to overlay each other.

The company said this telescoping may mean that bonanza-style silver and gold veins could potentially be found at Greenobbys.

And there is evidence of similar bonanza systems in the area. Just four kilometres to the west lies Magmatic Resources’ historic Bodangora mine, where about 250,000 ounces going an impressive 26g/t gold were mined during the late 1800s and early 1900s.

Impact has been working on priority targets at its Commonwealth project and the Apsley, Spicers Creek and Gladstone prospects are also receiving some attention.

A soil geochemical survey is underway at Apsley and the results may even set Impact off and racing again it they contain some anomalous numbers.

A detailed magnetic and radiometric survey has also been completed across all five target areas and the company will use the data to guide its follow-up programs.

Impact Minerals Limited Managing Director, Dr Mike Jones said: “… our extensive ground holdings in the prolific Lachlan Fold Belt have the potential to host not only a major porphyry copper-gold deposit, but also other possible styles of intrusion-related mineral deposits such as the newly recognised epithermal gold- silver mineralisation at Greenobbys.”

“Incredibly none of these prospects has been drilled and we will be doing the necessary work to get them to drill ready status as rapidly as we can”.

With Impact potentially sitting atop a sleeping copper-porphyry giant and an assortment of other metals contained in an epithermal deposit, things could get interesting quickly for this small capped explorer.