Sydney-based Gelatissimo is set to crack the Western Australian market, with plans to open a pop-up shop in Perth within months, followed by three cafes. 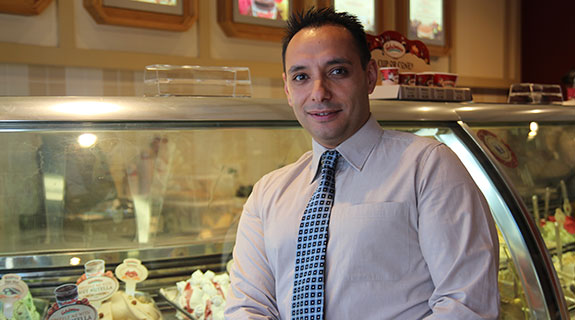 Sydney-based Gelatissimo is set to crack the Western Australian market, with plans to open a pop-up shop in Perth within months, followed by three cafes.

Gelatissimo, which makes its gelati in-store, has a national and global footprint, with a total of 34 stores in Australia, 16 of which are in Sydney.

It also has stores in the Philippines, Singapore, Kuwait and Saudi Arabia, and recently appointed a manager of international expansion.

It's entry into the WA market, which has been planned for four years, comes hot on the heels of  US ice-cream giant Ben & Jerry's opening a pop-up shop in Northbridge, followed by a store in Hillary's Boat Harbour, and Baskin Robbins' moves to follow through with delayed expansion plans.

In Business News' Lists and Rankings, Baskin Robbins is the 42nd largest franchise in WA, Cold Rock is the 77th and Gelatissimo, if it were to open three stores, would be ranked equal 81st with several other businesses.

Gelatissimo chief executive Filipe Barbosa told Business News he was in negotiations with several potential franchise owners for cafes in Fremantle, Leederville and Mount Lawley, but no deal had been struck yet.

“Fremantle primarily because every personwho goes through Perth visits Fremantle at some point in time during their stay,” Mr Barbosa said.

“It captures the transient tourist market, be it Australian or foreign. Mount Lawley and Leederville primarily due to the dining nature of those areas, the fact that they’re a night time precinct that captures the Perth market for entertainment.”

Mr Barbosa said to grow brand recognition it would start with a pop-up shop, in a location yet to be decided.

He said a full-service cafe offering gelati, coffee, and snacks would be operational by the end of this year, with all three stores to open within 12 months.

“We know we can hold our own, we’ve always competed very well in all areas where there’s competition,” Mr Barbosa said.

“Our main product’s made fresh in store, that’s our main point of differentiation, we use no artificial colours and flavours, we’ve got a product that the vast majority of the market would certainly recognise as a premium product and we’re confident that we can take competition head on.”