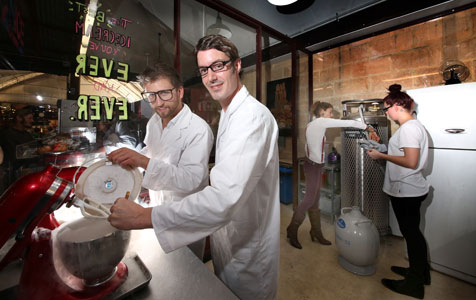 YOUR SERVE: Nice Cream Labs founders Steve Bell (left) and Tristan White are at the grass-roots end of the ice-cream business.

The big names in the ice-cream business are planning to grow their presence in Western Australia, lured by the long, hot summers and higher disposable incomes.

But pledges from the likes of US companies Ben & Jerry’s and Baskin Robbins, and Australian companies Cold Rock and Gelare, are sparking a sense of déjà vu as the promises have, by and large, all been made before.

The move by Ben & Jerry’s into the WA market was promoted via a popular ‘scoop-wagon’ parked at the Perth Cultural Centre, garnering a lot of publicity for the franchise and satisfying a significant number of ice-cream aficionados.

The business has rapidly pushed its retail products into the market through distribution arrangements and is in the process of securing a site for its first franchise store, which will mark the start of a wider expansion plan.

It’s the latest big name to enter the local market, but its competitors are not sitting idly by.

Baskin Robbins has also launched a significant expansion of its WA presence as it plans to add a further 200 franchises to its national network over the next 10 years.

It’s been a rocky road for Baskin Robbins, however, and its plan to open more stores is nothing new.

In 2011, the company told Business News it would open a further 10 franchises in WA by August 2012, taking its total to 21 stores.

Two years on, the company has 14 stores. Its expansion was disrupted by the collapse of its local operator, and it is now revisiting the plan after signing a master franchise joint venture agreement with Middle East-based licensee Galadari Brothers.

Queensland-based Cold Rock has also yet to fulfil its expansion plans. Two years ago it said it had agreements to open 24 new franchises, however none of those eventuated.

Cold Rock has only three stores, the latest Northbridge store adding to its franchises at Hillarys and Fremantle.

Managing director of parent company Franchised Food Company, Stan Gordon, told Business News it had planned to strike an agreement with Video Ezy to create a joint-venture franchising arrangement but the “goal posts had been moved”.

“But those discussions are back on the table, and we could have an outcome in the next month or so,” Mr Gordon says.

WA business Gelare, which sets itself apart with a menu including waffles and pancakes, had been eyeing expansion into the US.

Instead it’s put that plan on hold because of logistical challenges, while the number of franchises in WA has dropped from 17 to 12 in the past three years.

Founder Farid Torabi says changing consumer preferences and the increasing cost of trading in WA forced the company to reassess its expansion strategy.

“We’re still wanting to expand (in WA) but we are being more careful about where we want to put our stores,” Mr Torabi told Gusto.

“We’re looking at more community-based locations that we probably wouldn’t have thought of considering a few years ago.”

Mr Torabi says the larger retail shopping centres have not performed well, specifically with the introduction of Sunday trading, and the cost of rent and labour outweigh the value of keeping a number of franchises open.

They’re taking an approach not yet seen in WA by making ice-cream with liquid nitrogen, thus the name Nice Cream Labs.

Mr White, currently a full-time computer scientist, says the pair has been rushed off their feet since launching the stall about a month ago and have already been approached by a number of different parties wanting to set up the business’ first permanent ice creamery.

“Of all places we might actually end up with the first one in Israel,” Mr White says.

“A friend of ours who has been involved is moving back there would really like to open up a store.”

While both men are still working full time, Mr White says he has no doubt Nice Cream Labs would become a full-time undertaking in the future.

“I think this is my career path, which is a bit of a serious tangent. But it’s great because I’ll get to do a bit of everything in the business.”