Hunger a threat to Egyptian stability

The Arab Spring hasn’t unfolded the way many in the West would have wanted, with famine now a real possibility in Egypt. 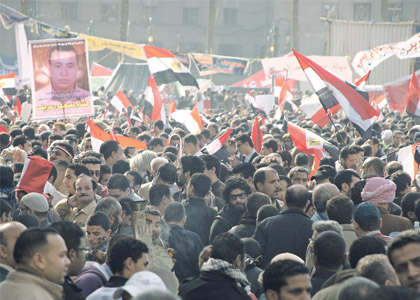 HUNGER FOR CHANGE: Bread, Freedom and Social Justice was the catchcry of protesters in the Arab Spring uprising in Cairo in 2011. Photo: iStockphoto

The Arab Spring hasn’t unfolded the way many in the West would have wanted, with famine now a real possibility in Egypt.

AUSTRALIAN media coverage of this month’s round of violent demonstrations in the Egyptian capital, Cairo, and its three Suez Canal cities of Port Said, Ismailia, and Suez, has overlooked a crucial factor.

Egypt is on the path to chronic food shortages; another way of saying it’s moving towards widespread famine.

I’ve been aware of this coming catastrophe for some time because two experts - Perth scientist David Archibald, and New York-based economist, demographer and columnist, David P Goldman - have warned of its inevitability.

It was Mr Archibald - now completing a book focusing on this issue - who first outlined it to me, and then explained why the Middle East North Africa (MENA) region (Morocco to Afghanistan) faces mounting food, especially grain, shortages.

Egypt’s population has grown from four million in 1798, when Napoleon waged the Battle of the Nile, to its present 84 million.

With its population growing at

1.8 per cent, Egypt adds 1.5 million mouths annually, so its grain requirements are rising by about 0.5 million tonnes each year.

“On the current trajectory, import requirements will reach 28mt by 2030.

“What holds Egyptian society together for the moment is subsidised bread.

He said whatever other faults ousted president Hosni Mubarak had, he “ran the country as an ongoing business”.

By late 2010, Egypt’s foreign exchange holdings were $35 billion. But by mid-2012 they’d slumped to just $5.9 billion and continue being depleted despite grants from Qatar and Saudi Arabia.

Mr Goldman’s findings point to the inevitability of the same fate, something he’s highlighted for several years in his weekly column in Asia Times, titled ‘Spengler’.

His column of February 6 2013 is headlined ‘Eat Less, Egypt’s Government Tells its People’.

In it he quotes a Washington Post article of the previous day headlined, ‘Egyptians, short on food, are told to eat less’, which stated: “The [Egyptian] government has acknowledged across-the-board food price inflation on a range of commodities in a new report.

“Tourism, once a pillar of Egypt’s GDP, has dried up, and there is little foreign investment.

“Egypt’s unemployment rate is projected to hit 14 per cent this year, up from about 9 per cent in 2010, and the United States is questioning whether to cut the $1.5 billion in aid it sends to Egypt each year.

“‘The [Egyptian] government subsidizes fuel and foodstuffs - things it can’t afford - but it also can’t afford to unwind those subsidies politically, so it is really in a very serious situation,’ Middle East expert Steven A Cook recently told the Council on Foreign Relations.

“The economic struggles mean most Egyptian households don’t have enough money to buy clothing, food and shelter, according to a 2012 survey by the Egyptian Food Observatory.”

Mr Goldman said such reports served to highlight “the reality of most Egyptians’ shoestring existence, especially as the Egyptian government is trying to find ways to end subsidies to save money.”

Also rarely stressed in the Western media during the 2011 political upheavals dubbed the Arab Spring was that it was underpinned by the slogan: ‘Bread, Freedom and Social Justice’.

The fact that ‘bread’ was mentioned ahead of freedom and social justice wasn’t coincidental.

Mr Goldman said bread was vital for the majority of Egyptians because “to have it is to live”.

“Therefore, the government sent shockwaves across the nation when, days before the second anniversary of the revolt, one of the cabinet ministers disclosed a plan to offer every Egyptian just three loaves of the baladi (round) bread every day at the state-subsidised price,” he continued.

“The people who want to get more bread will have to buy the staple commodity at the market value, which is five times higher than the subsidised price per loaf.

“The controversial rationing is part of an ambitious plan to phaseout state subsidies on certain commodities, so as to reduce an unsustainable budget deficit.

“It is also believed to be part of a package of austerity measures that Egypt has to adopt before getting a $4.8 billion loan from the International Monetary Fund.

“The bloody civil disturbances that rocked Egypt during the past 10 days were food riots as much as anything else.

“Egyptian President Mohammed Mursi today welcomed his Iranian counterpart Mahmoud Ahmadinejad in Cairo, the first visit of an Iranian leader to the country since Iran’s 1979 revolution.

“The Obama administration is proceeding with the sale of 20 updated F-16s and 100 Abrams tanks to Egypt. The numbers simply don’t add up.

“To maintain its present, minimal consumption levels Egypt will require at least $22 billion in aid in 2013 (Bloomberg News’ estimate).”

Mr Goldman, like Mr Archibald, contends that we are presently: “Watching something unique and terrible in modern history, namely the disintegration of a society of 80 million people, with the prospect of real hunger - a self-made famine brought about by social and political disaster rather than crop failure or war.”

According to Mr Goldman, there’s simply no prospect of the West, with its own difficulties stemming from precariously operating banking sectors, high taxes, and bloated debt, providing between $20 billion and $30 billion annually to bail out Egypt.

Mr Archibald said he was amazed that the world had so quickly forgotten that the so-called Arab Spring had been ignited by the food question.

“The Arab Spring began in the Tunisian capital, Tunis, with the selfimmolation of a vegetable vendor at

He said few Westerners appreciate how precariously balanced the food supply currently is across the entire MENA region, especially now that world grain prices are rising and the productivity boost of the ‘green revolution’ has peaked.

“What distinguishes the MENA region from the rest of the unpleasant portions of the world is the combination of very high population growth, nuclear weapons, a misogynist religion, distasteful autocratic and theocratic regimes, a high proportion of the world oil supply, and messianic populist movements,” Mr Archibald said.

“If it weren’t for the oil supply factor and nuclear weapons, the death convulsions of these unpleasant regimes would be of no great consequence.

“The problem for the pleasant part of the world is to limit the damage the death convulsion of the MENA region might cause.

“Thus their predicament needs to be studied in order to forecast how events might unfold.”