Huff and puff won’t blow this house down

Provocative comments by the premier and his treasurer are playing well at home, but have found few allies elsewhere. 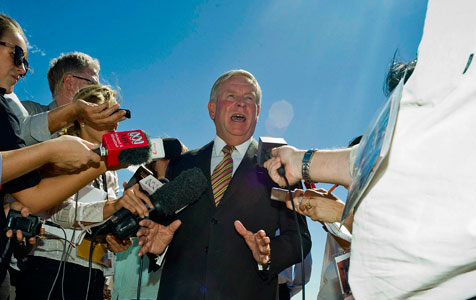 STONEWALLED: Colin Barnett’s concerns over the GST were rebuffed by other leaders at the recent COAG meeting.

Provocative comments by the premier and his treasurer are playing well at home, but have found few allies elsewhere.

Events of the past few weeks have shown that Paul Keating’s warning to never come between a premier and a bucket of money is as valid today as when he uttered it.

This time around the bucket of money is the GST and the issue at hand is how it’s distributed, with Western Australian Premier Colin Barnett finding himself at odds with every other state and territory leader.

Just before the GST became operational on July 1 2001, then prime minister John Howard addressed the nation to tell taxpayers of its alleged benefits.

“This is something the country has needed for more than 20 years and we’re doing it because it is the right thing for the nation,” Mr Howard said.

“It will give us a fairer taxation system. It will cut our income tax. It will strengthen us in the world.

“It will guarantee the revenue we need to support the health, education, police and other services so important for a fair society.”

Interestingly, Mr Howard chose not to allude to the fact that the Australian Capital Territory and the Northern Territory would also be drawing GST money.

And this despite Mr Howard also saying “every last cent of the GST revenue will go to the states”.

“Every state in Australia, over time, will have more money to fund the roads, police schools and hospitals so important to our daily lives,” he added.

Also not mentioned was that premiers had agreed to complicated formulations that augmented certain states and those territories where revenues were below benchmarks, negotiated by a WA Liberal cabinet.

And that’s how the ‘fairer taxation system’ has been carving-up the mounting GST billions since 2001.

Dr Nahan made the reference after a confrontation with state treasurers in Canberra.

Mr Barnett lobbed his grenade from further afield, in Singapore, and added to it the strange claim that he’d be preparing a policy of ‘disengagement’ from the rest of the nation that would threaten federal programs and east-west links.

Precisely what’s meant by ‘disengagement’, which he says stops short of secession, only time will tell.

“If the GST is not resolved, WA’s future is not with the rest of Australia in a fin­ancial or economic sense,” Mr Barnett said.

“If we shift to Asia then more of what is brought into Western Australia, more of our goods and services, will come from Asia and not from the east coast.

“Our Boston Tea Party will be shifting our economic focus to Asia at an accelerated rate.”

“If I relied on my fellow state treasurers, I would come out with just my underwear on,” he said.

“I had to take in a second belt just to make sure my pants stayed up.

“It was pretty ferocious but civil, well, almost.”

For good measure the WA treasurer said his counterparts were “bloody greedy” about the GST distribution.

This proved too much for Victorian Premier Daniel Andrews, who said WA’s calls for more GST cash was a bit rich.

“They are spending like drunken sailors and they want Victorians to help them pay for it,” he said.

“They’ve had a very good run for a very long time.”

“The fact is, despite the plummeting return of our GST, the Barnett government has presided over enormous revenue growth,” Mr Wyatt said.

“When Mr Barnett became premier, the state had revenue of $19.2 billion.

“This year, even with the reduction in the iron ore price, we can expect revenue of just over $27 billion.

“A 40 per cent growth in revenue, in just seven years, is strong revenue growth by any measure.

“Further, as was pointed out by the Grattan Institute in its 2014 report ‘Budget Pressures on Australian Governments’, in the 2013-14 financial year WA collected more revenue per person than any other state in the nation.

“The Barnett government enjoyed a massive $2,000/person more than either NSW or Victoria.

“So, despite record revenues, Mr Barnett and his seven treasurers have lost the state’s AAA credit rating, will plunge the state into its first deficit in 15 years and, despite Mr Barnett stating that net debt would not exceed $20 billion, our net debt is now expected to be $25.3 billion in 2014-15, surging to $30.8 billion by 2017-18.

“This has always been the problem of the Barnett government; they have spent the revenue they wished they had, rather than the revenue that they actually had.”

Colourful protest is one thing, repaying a huge debt from boom times in leaner ones is another altogether.

Now he’s talking of preparing a policy of disengagement with the rest of the nation that would threaten federal programs and east-west links.